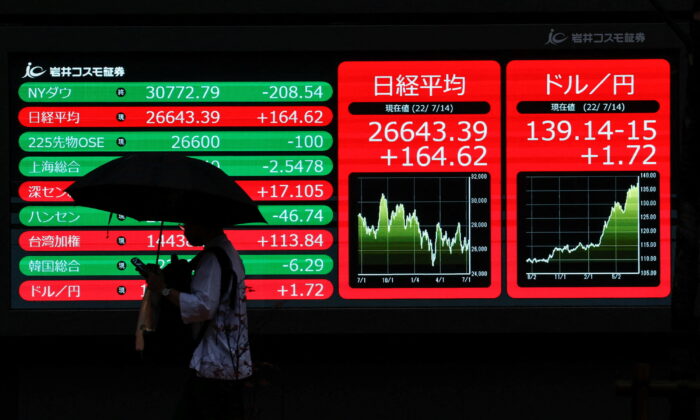 The broader Euro STOXX 600 fell 0.6 percent, with indexes in Paris and Frankfurt both down 0.9 percent.

Traders were on edge with few immediate pieces of macroeconomic or political news to drive direction, market players said.

“Really little exposures all over the place, and waiting for some sort of clearer direction to deploy risk.”

The dollar continued its slow retreat from last week’s two-decade peak, hovering just above a one-week low touched on Monday.

The dollar index—which gauges the greenback against six counterparts—was down 0.3 percent at 107.100, well back from the high of 109.29 last week, a level not seen since September, 2002.

The European Central Bank and Bank of Japan both meet on Thursday, with the ECB widely expected to begin raising rates from their pandemic era lows with a 25 basis point hike, while little change is expected from the ultra dovish BOJ.

But with markets awaiting major macroeconomic news, the overall picture was murky.

“It’s a bit like ‘paint by numbers’ at the moment, you’ve got a picture to fill in, but we don’t have all the colours yet,” said Kerry Craig, global market strategist at JPMorgan Asset Management.

“There are a couple of things missing (such as) the direction of the labour market and unemployment rate in the U.S., and whether central banks will step back and say ‘that’s the peak in inflation and we don’t need to be as hawkish’, or ‘we’re going to be really aggressive’.”

Markets are expecting a large 75 basis point interest rate hike at the U.S. Federal Reserve’s meeting next week, away from a flirtation with the chance of an enormous 100 basis point rise.

The euro, under pressure amid soaring energy costs, has recovered somewhat from its brief fall below one U.S. dollar last week for the first time since 2002.

By Tom Wilson and Alun John