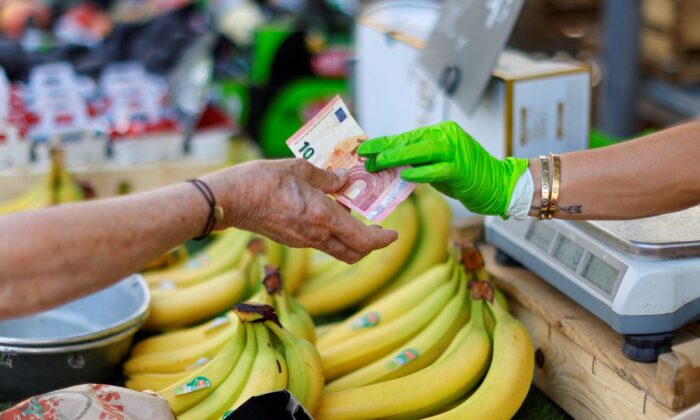 A shopper pays with a ten Euro banknote at a local market in Nice, France, on June 7, 2022. (Eric Gaillard/Reuters)
Stocks

Euro Holds Below $1.06 as Lagarde Sticks to Script

LONDON—The Aussie and the Canadian dollar climbed on Tuesday on firmer oil prices while the euro held below $1.06 as European Central Bank (ECB) President Christine Lagarde offered no fresh insight on the central bank’s policy outlook.

Oil prices are up 10 percent in barely a week on supply constraint concerns with Brent crude holding near $117 levels pushing the Canadian dollar and the Australian dollar up 0.3 percent and 0.4 percent respectively versus the greenback.

“Oil is helping the Norwegian crown and the Canadian dollar to outperform and the euro is again running into resistance at the 1.06 level,” said Kenneth Broux, an FX strategist at Societe Generale in London.

The euro held below $1.06 after the ECB’s Lagarde said the central bank would move gradually but with the option to act decisively on any deterioration in medium-term inflation, especially if there were signs of a de-anchoring of inflation expectations.

Money markets are pricing in about 238 basis points (bps) of cumulative rate hikes by mid-2023 compared to around 280 bps two weeks ago.

Broader currency market moves were contained in a big week for markets. German inflation figures are due on Wednesday, French data on Thursday, and eurozone numbers on Friday.

At the other end of the dial, higher oil prices caused the partially convertible Indian rupee to open at a record low, and fall further to 78.67 per dollar.