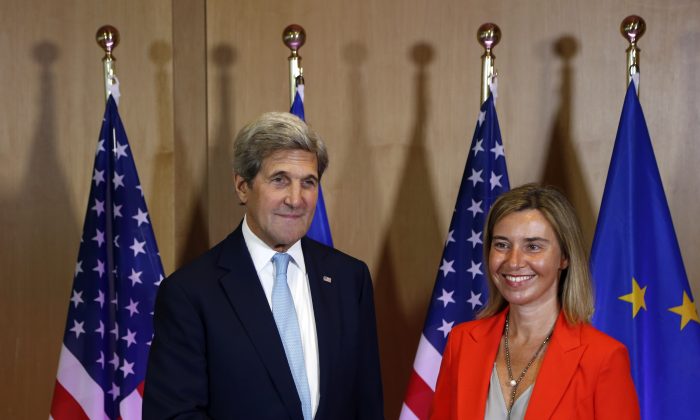 BRUSSELS—The European Union and the United States expressed alarm Monday with Turkey’s response to a failed coup, telling the NATO member and EU aspirant that it must uphold democracy and human rights as it pursues the military officers and anyone else involved in the plot.

“This is no excuse to take the country away from fundamental rights and the rule of law, and we will be extremely vigilant on that,” EU foreign policy chief Federica Mogherini said at a joint news conference with U.S. Secretary of State John Kerry.

The top American diplomat said Turkey must “uphold the highest standards for the country’s democratic institutions and the rule of law.”

While he recognized the need to apprehend the coup plotters, Kerry said: “We caution against a reach that goes beyond that.”

Kerry and Mogherini spoke after a meeting in Brussels that also included the bloc’s 28 foreign ministers, and after a weekend when Turkey’s government responded to the coup attempt by rounding up some 6,000 people, including hundreds of judges and prosecutors.

Mogherini said the talks on Turkey’s bid to join the European Union would end if Ankara restores the death penalty, as some are suggesting. That message was echoed by Germany, the union’s biggest state.

“The institution of the death penalty can only mean that such a country could not be a member,” Steffen Seibert, spokesman for Chancellor Angela Merkel, said in Berlin.

The coup plotters sent warplanes firing on key government installations and tanks rolling into major cities on Friday night. But the rebellion wasn’t supported by the military’s top brass and was quashed by loyal government forces and masses of civilians who took to the streets. More than 200 people were killed and more than 1,500 wounded.

US Embassy Warns of Possible Terrorist Attacks in Turkey

Both Mogherini and Kerry reiterated the trans-Atlantic support for Turkish President Recep Tayyip Erdogan’s democratically elected government. But they also revealed their deepening frustration with his government’s actions over the last three days. Beyond the detentions, one Turkish government minister even claimed U.S. complicity in the violence.

Going further than Mogherini or Kerry, the EU commissioner leading negotiations with Turkey on its accession bid suggested Erdogan was exploiting the crisis to eliminate opponents who may or may not have been involved in the coup.

“It is exactly what we feared,” Johannes Hahn said. It appears, he added, as if Turkey had “prepared” arrest lists of political opponents and was waiting for the right time to act.

Both the EU and the U.S. need Turkey right now and are limited in how far they can push the criticism.

Washington is working with its NATO partner to fight the Islamic State in Iraq and Syria, and Kerry credited Turkey for reopening a key air base in the south of the country; Brussels is counting on Turkey to stem refugees from reaching the continent. Merkel’s spokesman said the quashed coup hasn’t affected an EU-Turkish arrangement for stopping migrants arriving by sea.

Erdogan, for his part, is demanding that Washington hand over an exiled cleric he blames for orchestrating the violence. Kerry said no extradition request for the Pennsylvania-based cleric, Fethullah Gulen, has arrived yet. He said at the U.S. would first need to see “evidence, not allegations” of Gulen’s responsibility.