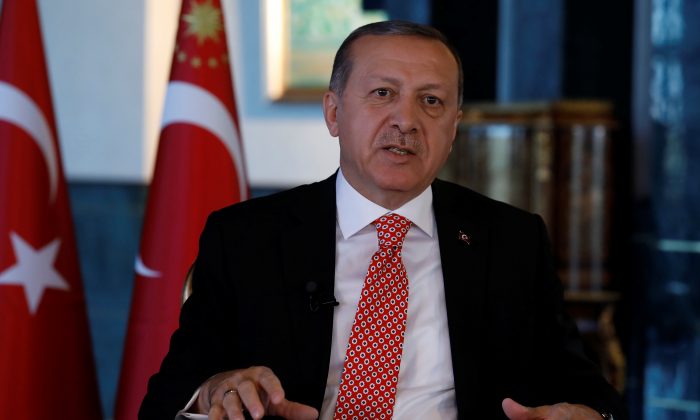 Erdogan Says Turkey Could Reconsider Its Position on Europe

ANKARA—President Tayyip Erdogan told Reuters on Tuesday that Turkey would reconsider its position on joining the European Union if it was kept waiting much longer and if the current hostile mentality of some member states persists.

Erdogan said a decision on Tuesday by the Parliamentary Assembly of the Council of Europe, a leading human rights body, to put Turkey on a watch list was “entirely political” and Ankara did not recognize the decision.

He said he was ready to take the question of EU accession to a referendum and that Turkey could not wait indefinitely after 54 years at the door.

“If they are not acting sincerely we have to find a way out. Why should we want any longer? We are talking about 54 years,” he said in an interview at the presidential palace in Ankara.

Erdogan pointed to the French presidential election, in which far-right leader Maine Le Pen has threatened to take France out of the European Union, and said the bloc was “on the verge of dissolution”.

“One or two countries cannot keep the EU alive. You need a country like Turkey, a different country symbolizing a different faith, this would make them very strong,” he said.

“But the EU member states don’t seem to realize this fact. They are finding it very difficult to absorb a Muslim country like Turkey.”