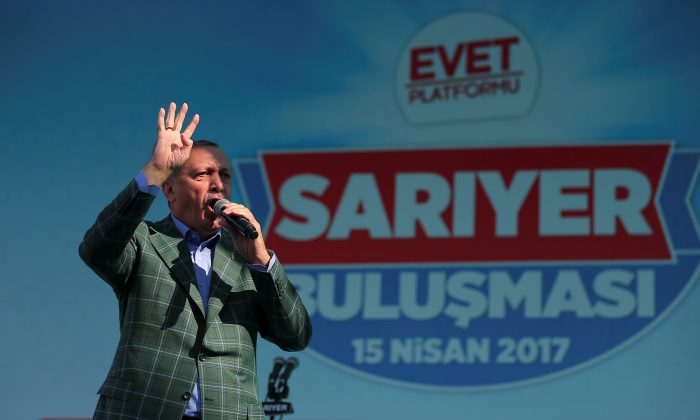 ANKARA—President Tayyip Erdogan appealed for support from Turkish voters in final campaign rallies on Saturday, the eve of a referendum which could tighten his grip over a country bridging the European Union and a conflict-strewn Middle East.

Opinion polls have given a narrow lead for a “Yes” vote in Sunday’s referendum to replace Turkey’s parliamentary democracy with an all-powerful presidency, a move Erdogan says is needed to confront the security and political challenges Turkey faces.

Opponents say it is a step towards greater authoritarianism in a country where 40,000 people were arrested and 120,000 sacked or suspended from their jobs in a crackdown following a failed coup attempt against Erdogan last July.

Western countries have criticized that tough response, and relations with the EU—which Turkey has been negotiating to join for a decade—hit a low during the campaign when Erdogan accused European leaders of acting like Nazis for banning referendum rallies in their countries on security grounds.

He has also said Turkey could review a deal under which it limits the flow of migrants—many of them refugees fleeing war in neighboring Syria and Iraq—into the European Union unless the bloc implements plans to grant Turks visa-free travel.

At a rally in Istanbul, one of four he held in the last hours before Sunday’s vote, Erdogan described the constitutional proposals as the biggest change in Turkey since the country was established nearly a century ago, and the culmination of the response to July’s abortive putsch.

“Sunday will be a turning point in the fight against terrorist organizations. We will finish what we started on July 15 this April 16,” he told a crowd in Istanbul’s Tuzla district, decked with Turkish flags and giant pictures of the president.

Erdogan’s Islamist-rooted AK Party has enjoyed a disproportionate share of media coverage in the buildup to the vote, but the result may be close. A narrow majority of Turks will vote “Yes”, two opinion polls suggested on Thursday, putting his support at only a little over 51 percent.

“Tomorrow is very important, you must absolutely go to the polls,” Erdogan urged the crowd. “Don’t forget that the vote is our honor.”

Some 55 million people are eligible to vote at 167,140 polling stations across the nation, which open at 7.00 am (400 GMT) in the east of the country and close at 5 pm (1400 GMT). Turkish voters abroad have already cast their ballots.

The package of 18 amendments would abolish the office of prime minister and give the president authority to draft the budget, declare a state of emergency and issue decrees overseeing ministries without parliamentary approval.

Proponents of the reform argue that it would end the current “two-headed system” in which both the president and parliament are directly elected, a situation they argue could lead to deadlock. Until 2014, presidents were chosen by parliament.

They also argue that the current constitution, written by the generals who ruled Turkey in the years following a 1980 coup, still bears the stamp of its military authors and, despite numerous revisions, must be overhauled.

“The presidential system we are bringing with this constitutional change is necessary for the development, growth and stability of our nation,” Erdogan said.

Kemal Kilicdaroglu, leader of the main opposition Republican People’s Party (CHP), said Turkey was at a crossroads between a democratic parliamentary system and a “one-man regime.” A “Yes” vote would put the country in danger, he said.

“We will put 80 million people onto a bus … we don’t know where it is headed,” he told an opposition rally in the capital Ankara. “We are putting 80 million on a bus with no brakes.”

Also opposing the proposed changes, the pro-Kurdish People’s Democratic Party (HDP) held a rally on Saturday in the southeastern city of Diyarbakir, which was addressed by its jailed co-leader Selahattin Demirtas.

“This campaign was not carried out fairly and equally,” Demirtas, who was arrested last November on terrorism charges, said in a joint letter with other detained HDP members which was read out at the rally.

“The reason behind our arrests was to prevent us from calling to our nation. The entire resources of the state were at disposal to support the ‘Yes’ campaign of the AK Party.”

Erdogan views the HDP as the political wing of the Kurdistan Workers Party (PKK) militant group, which has waged a three-decade insurgency in the southeast and claimed responsibility for a deadly attack on a police compound in Diyarbakir on Wednesday.

The PKK is considered a terrorist group by the United States and European Union.