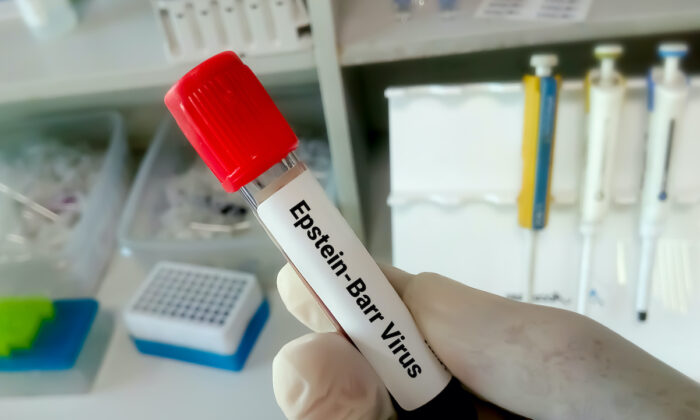 Harvard researchers have published findings that suggest Epstein-Barr virus, a member of the herpes virus family, is a likely cause for multiple sclerosis.(Saiful52/Shutterstock)
Health News

Most of us will be infected with the Epstein-Barr virus (EBV) during our lives. Researchers recently claimed that the virus causes multiple sclerosis (MS), and Moderna has already started an mRNA vaccine trial. At the same time, another recent study explores therapeutic avenues for treating the virus.

A team led by scientists at Harvard T.H. Chan School of Public Health recently published research in Science that says EBV, a member of the herpes virus family, is likely the cause for multiple sclerosis (MS).

Because EBV can’t be prevented, the researchers say a vaccine could be the answer. On Jan. 5, Moderna announced it was trialing a vaccine for EBV. It uses mRNA technology, which was first used in the COVID-19 vaccines. The research is known as the Eclipse trial. The Harvard study was released Jan. 13.

You can catch EBV most commonly from saliva. It can lead to infectious mononucleosis, or mono, which has also been dubbed the “kissing disease.”

About 2.8 million people globally have MS, and there’s no cure. About 90 percent of people in the world test positive for EBV, though most people don’t have any effects.

Harvard-led authors say the notion that EBV causes MS has been looked at for several years. This was the first study that showed evidence of not just a link, but a cause.

“This is a big step because it suggests that most MS cases could be prevented by stopping EBV infection, and that targeting EBV could lead to the discovery of a cure for MS,” Alberto Ascherio, professor of epidemiology and nutrition at Harvard Chan School and senior author, said in a statement.

They say the onset of MS symptoms doesn’t start until about 10 years after a person gets EBV.

To explore the connection, they looked at more than 10 million active U.S. military personnel. Of them, 955 were diagnosed with MS while serving.

They found that a person’s risk for MS went up 32 times after getting EBV, but the risk didn’t change after a person got other viruses. They say the findings can’t be explained by other known risk factors for MS, leading them to believe EBV is the cause.

Research out of The Wistar Institute published on Jan. 17 suggests there could be a new pathway to create therapeutics targeting EBV.

Their research highlights the EBV genome folds—that is, how it expresses itself and causes disease.

They used a modified DNA sequencing technique to explore the folding and pinpointed two cellular proteins—CTFC and PARP1—that are important to the process, Italo Tempera, associate professor at The Wistar Institute, said in a statement. Because drugs exist to target the proteins, Tempera said they may be able to interact with the folding.

“That means we can interfere in the way in which the EBV viral genome is functioning,” he said.

This past summer, two studies indicated that EBV reactivation could be tied to long COVID symptoms and severe COVID-19 disease.