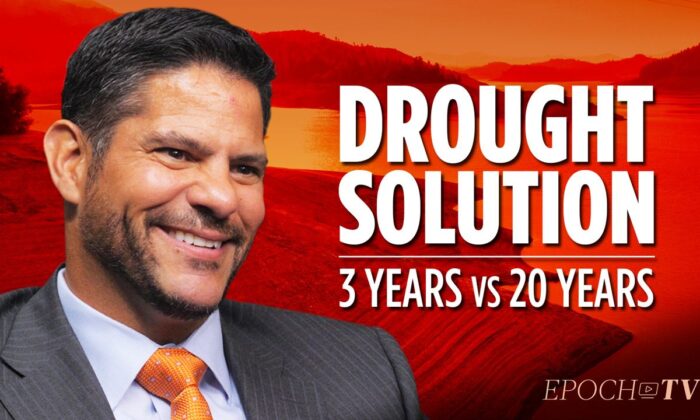 The state of California has been in the throes of a drought for many years. The chairwoman of the Water Resources Control Board stated in 2014 that the California drought was the most serious drought that Californians had faced in modern times. This severely affected farmers and the production of fruits and plants in the state. The California Department of Water Resources has been asking Californians to reduce the amount of water they use—some as much as 50 percent less.

In this episode of “California Insider,” titled “Desalination Plant Still Under Construction after 20 Years of Court Battles,” Scott Maloni, vice president of Poseidon Water, Desalination Project, discusses how the Metropolitan Water District is addressing the drought and water shortage on the Colorado River, which supplies much of the state’s water. Maloni talks about how his company has spent the last 20 years and $100 million on the project, which still has not been completed.

The host, Siyamak Khorrami begins the interview by having Maloni discuss the project’s goals. Maloni explains that while Californians are facing a severe drought and being asked to reduce the amount of water they use, there are solutions to the problem. He states that California needs to start building reservoirs, recycling plants, and desalination facilities. He sheds light on one of the most plentiful resources, the Pacific Ocean. While some have voiced concern over potential environmental impacts, Maloni assures that we have the technology to take that seawater and turn it into drinking water in an environmentally responsible and cost-effective way.

Maloni tells the host that there are many state agencies with overlapping authority along with environmental and other government agencies that make building something like a desalination plant very difficult. A lot of this is due to all the permits that are required, and the amount of time that it takes to obtain these and get everything in order. It can also cost a lot to build these facilities due to all the approvals that have to be obtained and litigation, which happens often in California.

He says it is a step-by-step process. The Water Board in 2015 acknowledged that seawater desalination is the future solution to California’s water shortage. They passed the first-ever regulations for desalination plants, and these were designed to lay out a path for plants to be built in a timely manner. However, since 2015, only one desalination plant has been built.

The desalination process takes seawater and turns it into drinking water. It is not a new technology and there are 18,000 desalination plants in 170 countries worldwide processing billions of gallons of water. Australia built six desalination plants in the same amount of time it took to get the permits for the one California plant. Maloni is proposing that a plant be built in Huntington Beach that will produce 50 million gallons per day of drinking water from the ocean. This would provide enough water for 400,000 people and would be the largest desalination plant in the western hemisphere.

The concept for the plant was introduced in 1998 and they started the permit process in 2001. Now in 2021, they are still trying to get a coastal development permit from the California Coastal Commission. Maloni stated he is often asked the question, “If this is such a great technology that is so needed, why is it taking you so long?” The answer is that when the project nears completion, the state changes the rules and regulations, which moves the project back to step one with redesigning and starting the permit process all over again. So that is why the plant has remained unbuilt to date. While there are environmental agencies who do not support the project, they have not been able to convince any of the state agencies to deny a permit—so they litigate instead. A desalination plant that was built in Carlsbad endured the same kinds of delays, but it was finally completed in 2015 and has produced 85 billion gallons of water since it went online. It is a proven success of how this can work and benefit people.

The state is not providing more environmental protection; it is just dragging out the process, which costs money and will ultimately increase the cost of water to consumers. An example of the type of lawsuits that the project has to contend with is the environmental agencies’ claim that the state agencies did not examine the impact studies closely enough and as a result, more costly studies must be done.

Maloni relates to the host that there is a limited amount of time to get these plants online. California cannot afford to keep waiting years for this to be completed—especially with the mounting water shortage. Proposition 1 earmarked funds to help with water resources. He states: “California needs to figure this out. We cannot wait 10 or 20 years for these water resources. We don’t have that kind of time. There is too much bureaucracy, too much regulation.”

The funding from Proposition 1 remains unspent on the project but rather is spent on studies that go nowhere. The California consumers are the ones suffering and not receiving a return on their investments. If the project can get the last permit it needs from the Coastal Development Commission, the district can begin building in 2022 and be online providing water to thousands of people by 2026.

Maloni has been working on completing this project for 25 years. He told the host that he believes in the project, and he is committed to seeing it to completion. The host then asks about technology and the changes it has undergone over the years. Maloni advises that the evolution of technology has only helped the project instead of hindering it. The process uses reverse osmosis and membranes to strain out the impurities. He stated those membranes are now lasting twice as long as they used to. This has reduced the cost of the process and made it more effective. But, the problems with the current project do not discourage him and his partners from future projects, because they see the need for these water resources. The host asks Maloni if there are any other countries besides Australia that are using this technology. The answer is a resounding yes. Israel is one good example. They get half of their water from desalination and then they recycle that water. They are a role model for how to handle a reduction in water resources.

The video concludes with Maloni talking about desalination and the need for it now and in the future. The Carlsbad plant  proves that it works in California and the plant in Huntington Beach will be the next example. The agencies do agree that this process works, but it is last on the list of water resource preservation measures—which is the wrong approach. The toolbox needs to be opened so that all the tools can be used where needed. The state must also plan for water resources in the future and that desalination technology will need to play a big role if these plans are to be successful. The processes with state agencies will also need to be streamlined so that projects do not continue to have long delays in the future.