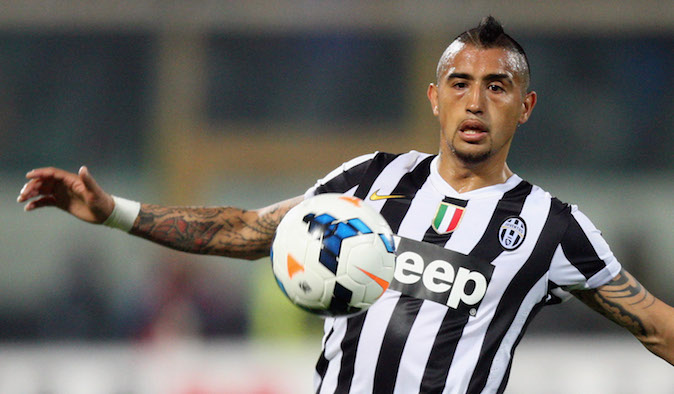 Arturo Vidal of Juventus during the Serie A match between Calcio Catania and Juventus at Stadio Angelo Massimino on March 23, 2014 in Catania, Italy. (Photo by Maurizio Lagana/Getty Images)
Soccer

Manchester United have been linked with Arturo Vidal, Arsenal are hoping to sign Lorenzo Insigne, and Liverpool could do a swap deal with Sunderland.

Netherlands and Man United coach Louis van Gaal has hinted that he could make a bid for Juventus’s Aturo Vidal, according to the Daily Mail.

Van Gaal had tried to sign the highly-rated, versatile 27-year-old midfielder when he was a manager at Bayer Leverkusen, but Vidal ultimately went to Juventus.

“I always wanted to buy Vidal when he was at Bayer Leverkusen but he went to Juventus,” van Gaal told ESPN.

“I like a lot of Chile players and they always play an attacking style.”

“It will be difficult for the Netherlands but we have confidence in the three games we have to play.”

Much as van Gaal admires Vidal, however, a lack of Champions League football at Old Trafford could prevent the Chilean from leaving Juventus.

Meanwhile, Arsenal are hoping to sign Napoli’s Lorenzo Insigne for £20 million ($33.6 million), according to the London Evening Standard.

Over an Merseyside, Liverpool could do a swap deal with Sunderland for Adam Johnson, the Daily Express reports.

Everton boss Roberto Martinez is said to be keen on signing the 26-year-old England winger, but has not made a formal offer.

This leaves room for Liverpool manager Brendan Rodgers to maneuver, and he could swap Fabio Borini for Johnson.

The Italian forward played excellently for the Black Cats while on loan in the 2013-2014 season, and might very well be tempted to make a permanent move to the Stadium of Light, given that he might have reduced playing time at Anfield.