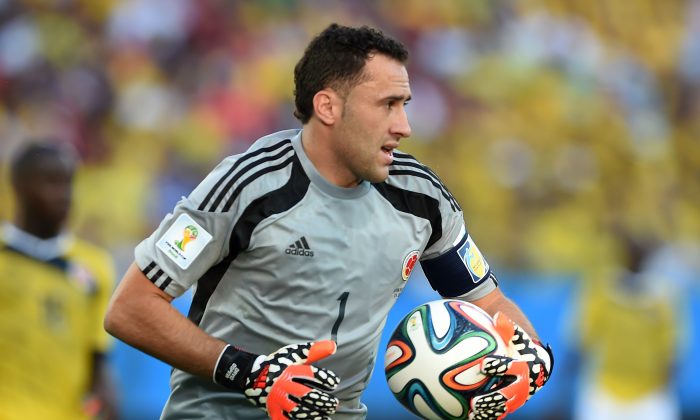 Colombia's goalkeeper David Ospina clears the ball during a Group C football match between Japan and Colombia at the Pantanal Arena in Cuiaba during the 2014 FIFA World Cup on June 24, 2014. (TOSHIFUMI KITAMURA/AFP/Getty Images)
Soccer

Gunners’ boss Arsene Wenger has been tracking Nice’s David Ospina for a while, and deal should be done soon now that the French club has signed Rais M’Bolhi from CSKA Sofia, according to the Daily Mail.

Over on Merseyside, Liverpool could be renewing interest in Chelsea’s Ryan Bertrand, according to the Daily Mail.

Liverpool boss Brendan Rodgers has been looking to strengthen his left back position in the summer, albeit rather unsuccessfully.

The Reds could miss out on Sevilla’s Alberto Moreno due to his high price tag, and has already lost Swansea’s Ben Davies to Tottenham Hotspur.

Chelsea could be looking for a fee in excess of £8 million ($13.6 million) for their 24-year-old left back.

Meanwhile, Manchester City could be making a move for Real Madrid’s Isco, according to the Independent.

Los Blancos has made two big money moves for Bayern Munich’s Toni Kroos, and AS Monaco’s James Rodriguez, and could be looking to offload players to balance the books.

Isco, 22, joined Real in 2013. Despite his obvious quality, he could find himself squeezed out of the Real Madrid midfield, and could be looking for a move even if Madrid does decide to keep him.