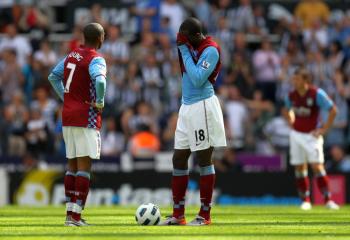 Rahul Vaidyanath
Journalist
Rahul Vaidyanath is a journalist with The Epoch Times in Ottawa. His areas of expertise include the economy, financial markets, China, and national defence and security. He has worked for the Bank of Canada, Canada Mortgage and Housing Corp., and investment banks in Toronto, New York, and Los Angeles.
View profile
Follow
biggersmaller
Print
The early weeks of the English Premier League season usually do manage to throw up a few surprises.

But who would’ve thought that after two weeks (20 games played), the most common final score we would have seen is 6–0? It’s only been two weeks, but four games (20 percent) of the games played in the Premier League have ended in a 6–0 final score, including three this past weekend!

So what is going on?

Chelsea has recorded two of the 6–0 thumpings. This is just a classic case of a very good team playing against very bad teams (West Brom and Wigan). West Brom and Wigan are two candidates for relegation while Chelsea is the defending champion that set a record for 103 goals scored last year.

In a world where the rich get richer and the poor get poorer, the gap between the top of the table and the bottom gets wider.

Arsenal crushed newly promoted (and soon to be relegated) Blackpool 6–0. If a team like Blackpool attempts to go toe-to-toe with a Premier League big boy, expect this kind of result. To Blackpool’s credit they didn’t “park the bus in front of the net,” but they took a beating that could have been worse had Arsenal’s finishing been more like Chelsea’s.

But the most shocking 6–0 was recorded by Newcastle over Aston Villa this past Sunday. Aston Villa finished impressively in sixth place last year but the departure of manager Martin O’Neill and the loss of James Milner to Manchester City have set the club back.

But still, 6–0? Interim manager Kevin MacDonald described Villa’s performance as “naive.” Everything just went right for Newcastle and it all started badly for Villa after striker John Carew fired a penalty kick into Row Z with the game 0–0.

The result may not be totally surprising if we think back to the 7–1 loss suffered by Villa at the hands of Chelsea last season in March. O’Neill described that loss as one of the worst days in his managerial career.

When things go bad for Villa, they can get ugly is the lesson here, but it’s not something that happens very often.

Wigan getting blown out does happen often. In fact, on the final day of last season, with Chelsea needing a win to secure the Premier League crown, they hammered Wigan 8–0.

In fact, in both weekends of Premier League action, no fewer than four games have been won by three or more goals. With the weaker clubs being weaker than before in relation to the stronger clubs, one might think the neutral fans should be able to weed out a handful of fixtures every weekend as being potentially lopsided.