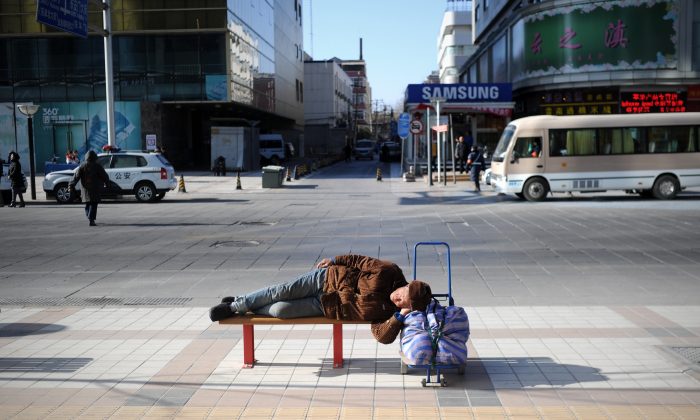 An elderly man rests on a bench in Beijing on Jan. 3, 2014. (Wang Zhao/AFP/Getty Images)
China

China's one-child policy has another set of victims: the lonely elderly bereft of family life
By Leo Timm

“Four generations under one roof” is a common Chinese idiom, an indicator of a successful and prosperous life. Now, just getting two generations in the same house is a challenge fewer and fewer Chinese can afford. Over 70 percent of Chinese seniors in urban areas live away from their children, according to recent data reported in China’s official press.

Xun Qi, a 77-year-old resident of Changzhou in Jiangsu Province, has placed newspaper ads in hopes of finding a family that will “adopt” him. He has led a solitary existence for years, living off a pension.

“I don’t have anyone to talk to,” Xun told Xinhua, the official state mouthpiece. “I talk to myself every day and often spend one or two hours murmuring while looking at old photo albums.”

Xun is lonely but doesn’t wish to burden his own family that lives far away, by moving in with them, since they “don’t possess the means.”

For a family willing to take him in, Xun offers to share his monthly pension and pay for his own funeral.

Part of what motivated Xun’s ad placement was the sudden death of his neighbor, during the 2012 New Year season. His caretaker was on vacation at the time and the body was not discovered until after the holidays.

Xun Qi is just one of millions of elderly Chinese who reign over childless households—called “empty nesters” colloquially.

According to research by the China National Committee on Aging, between 2015 and 2035, there will be an annual increase of 10 million seniors. The proportion of elderly in midsize and large cities who live alone has reached 70 percent, placing a significant strain on the health care and social security systems.

The phenomenon is a product of China’s rapid social and economic changes, as well as the effects of the communist regime’s one-child policy, which has led to a graying population.

I often spend one or two hours murmuring to myself while looking at old photo albums.
— Xun Qi, Chinese pensioner

The one-child policy, instituted in 1979, forbade most couples from producing more than one child, a sudden reversal of the traditional preference for large families, which acted as a traditional support for parents and grandparents.

In order to keep a population stable, the fertility rate must remain at or above 2.1 children per woman, but in China that figure is only 1.5. While China’s overall population is not projected to decline significantly in the foreseeable future, the elderly will make up an ever larger section of the population.

Li Jianxin, professor of sociology at Peking University, told state-run Reference News that the effects of the one-child policy resulted in an increasing number of “4-2-1” families, in which an only child faces the pressure of caring for two parents and four grandparents later in life. At the same time, millions of families who have lost their only son or daughter have been deprived of any family support.

“The greatest risk the Chinese population faces is not the total number, but the aging,” Li said.

Over 100 million empty-nesters were estimated to be living in China in 2013. This number is feared to shoot up to 200 million by 2030, according to the committee’s study. By 2035, China’s total senior population will be over 400 million.

People’s Net, the online arm of the state-run People’s Daily, conducted a survey in 2013 with concerning results: 90 percent of people born after 1980 said that they did not believe in their ability to provide for their parents. Seventy-four percent agreed that due to the pressure of work and life, it would be impossible to spare much for the older generations. Half of those surveyed said that they lived away from their parents and would be unable to afford living together with them.

About two-fifths indicated that incompatible standards of social welfare and health care prevented them from residing with their parents, according to the survey.

Lianhe Zaobao, a Singaporean newspaper, interviewed Li Wanyuan, an elderly woman who lives in Beijing’s Dongcheng area. At 76 years, Li is ill with two chronic diseases and has trouble moving around. Even having a basic meal is a challenge for her.

While a community cafeteria used to provide meals, it was later closed and now Li relies on supplies of steamed buns from her 53-year-old daughter, who delivers them weekly.

But Li feels guilty. “My daughter is 53 years old and not in good health herself. She also has her own family to take care of,” she said.

To burden her daugher as little as possible, Li’s life revolves around “trying to drink less water, eating less food and avoiding going to the bathroom at night.” She also avoids showering as much as possible for fear of slipping and creating additional medical costs.

Li’s life revolves around “trying to drink less water, eating less food and avoiding going to the bathroom at night.”

Lonely seniors have also become a growing source of mental health issues such as anxiety and depression, which has manifested in increasing reports of suicides among this demographic, particularly in the countryside, where harsh economic conditions exacerbate the toils of life.

China National Radio interviewed an old woman surnamed Chen. She lives in Nanning, Guangxi Province, in southern China. Her only son works in Beijing and only comes home for the Chinese New Year, she said. She spoke of the inconveniences of life—there is no one to help her use computers or even change light bulbs.

In 2009, an 81-year-old man attempted to jump to his death, but was rescued. He told onlookers that life alone had become difficult and boring.

When an old man died alone in his hometown in Anhui Province in late 2014, his body was found days following his death. It had been mutilated by the numerous dogs he had raised in his final years.

Juliet Song and Jenny Li contributed to this report.