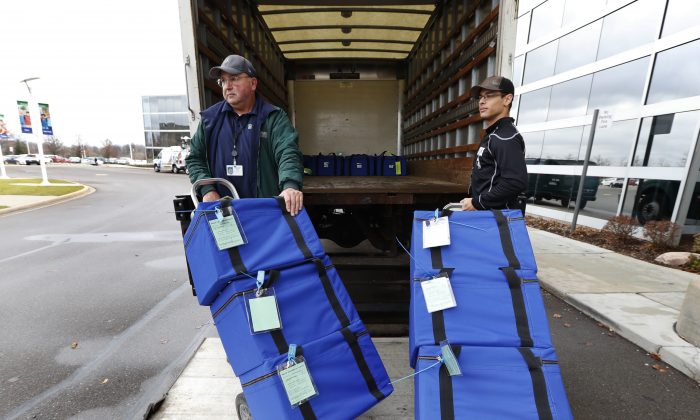 Michigan’s elections bureau ordered an investigation Monday into substantial ballot discrepancies in a small portion of Detroit’s voting precincts, after the discovery of a polling place where 300 people voted but only 50 ballots were properly sealed in a container.

Since learning of the issue last week during Michigan’s presidential recount, state officials have learned of similar “significant mismatch” problems at roughly 20 of Detroit’s 490 precincts, said Fred Woodhams, a spokesman for Republican Secretary of State Ruth Johnson. He said there is no reason to think votes were not counted and the differences would not have affected Republican Donald Trump’s narrow victory over Democrat Hillary Clinton in the state.

Detroit elections officials told the state that in the one precinct, the 250 missing ballots were left in the tabulator bin, “but we want to verify this,” Woodhams said. It was not immediately clear what caused the inconsistencies in other precincts.

Clinton cut into Trump’s 10,704-vote win by only 102 votes during Michigan’s election recount, which was requested by Green Party candidate Jill Stein and which covered more than 40 percent of the statewide vote before courts stopped it.

Many precincts could not be recounted, however — in Detroit and elsewhere — because the number of ballots in a sealed container did not match the number of voter names recorded in the poll book. In such cases, the election night totals stood.

It is not uncommon for there to be slight inconsistencies, typically due to human error.

The ballots in question will be taken to the state capital, Lansing, for review. The investigation will take about three weeks.

Roughly 2 million of Michigan’s 4.8 million ballots were recounted by hand, including about two-thirds of those in the suburban Detroit suburb of Oakland County and one-third of Wayne County, which includes Detroit.

“We do have a very accurate system that people should have confidence in,” Woodhams said.

“It just simply would not have changed the result,” Woodhams said of the recount.

A message seeking comment was left with Detroit elections director Daniel Baxter. He has blamed discrepancies on optical scanners that tally paper ballots.

All of Michigan’s vote tabulators are at least a decade old — at the end of their life span — and acted their age on Election Day, with numerous malfunctions, state and local officials said. One in five in Detroit was reported affected.

The attorney who represented Stein in her failed recount bid, Mark Brewer, said the mechanical troubles led to an undercount of votes. He estimated nearly 2,000 votes were added as a result before the recount was ordered halted “and we probably would have picked up several thousand more had the recount been allowed to continue.”

Detroit has been cash-strapped so maintenance may have been a bigger issue there than elsewhere.

“These machines should have been replaced years ago across the state,” Brewer said.

Michigan plans to have new scanners in place for the 2018 elections.

Before the announcement Monday, both GOP and Democratic lawmakers had called for an investigation into the irregularities. House Democrats criticized the Detroit Department of Elections while Republicans said a probe was needed to determine if there was fraud or negligence.

Sen. Patrick Colbeck, a Canton Republican, on Monday welcomed the audit and said all problems should be documented.

“This needs to be done while memories are fresh in order to help devise a plan to eliminate such concerns for future elections,” he said.