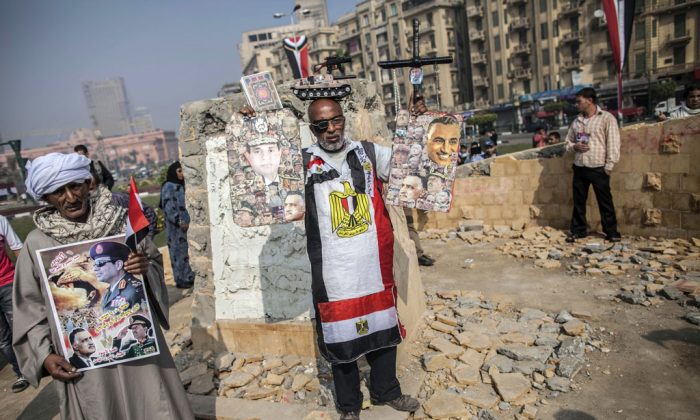 An Egyptian man dressed in the colours of his national flag and holding posters bearing images of Egypt's Defense Minister General Abdel-Fattah el-Sissi (L) and late Egyptian president Gamal Abdel Nasser (L) amongst other political leaders as protestors gather in Tahrir square to mark the anniversary of anti-military protests on November 19, 2013 in Cairo. Dozens of supporters and opponents of the army gathered in Tahrir to mark the anniversary of anti-military protests, amid mounting anger over a memorial to those killed in Egypt's uprising. (Mahmoud Khaled/AFP/Getty Images)
Opinion

Egypt’s Election: Beyond the Foregone Conclusion

On May 26 and 27 Egyptians will go to the polls to elect a president for the second time since the January 2011 revolution. Field Marshal Abdul-Fattah el-Sisi is expected to win by a wide margin over the only other contender, leftist politician Hamdeen Sabahi. The magnitude of that victory, however, will have an important impact on Sisi’s electoral mandate, and many questions remain about what he plans to do with it once in power.

Sisi’s campaign has been largely muted. For security reasons he has not been able to travel around the country and hold public rallies, and has thus limited his communication to a number of managed long media interviews. Supporters celebrated his appearances, saying that he came across as calm, capable, and nationalistic; opponents criticized him by saying that he did not enunciate any detailed political or economic platform and came across as authoritarian. In his various appearances Sisi made clear that his priorities were security, stability, and development, and he presented himself as a kind of firm CEO who can put the Egyptian administration and economy back on track through good management.

His campaign has not issued any detailed platform, posting instead a brief set of bullet points called “elements of the future.” The document reiterates that security and stability will be key early priorities, and emphasizes the importance of economic investments and projects. It promises that the new administration will build 22 industrial zones, 26 new cities, eight airports, and 20,000 schools; will boost health provisions; will invest in irrigation and agriculture; and will rationalize energy use. It also maintains that “building the state will be based on cooperation between state institutions and the private sector.” There is no mention of democracy, the political process, or even reform of government institutions. Rather, the document says that the new administration will work to “improve the media and religious discourse in order to shape the consciousness of the masses and rearrange the alignments of Egyptians” and will seek to “increase the role of youth, and build their capacities to shoulder responsibilities and increase their social participation.” These brief points are listed on the campaign website with little explication.

During his interviews, Sisi talked about “pluralism” as a key component of his view of Egypt, but also made clear that “there would be no Muslim Brotherhood” during his tenure. He emphasized that he was part of a constitutional order and even said that he would step down if the people came out en masse against him, but he also implied that pursuing democracy single-mindedly under current circumstances might jeopardize the very existence of the nation. Also, while praising Egypt’s youth and workers, he expressed support for the stringent anti-protest law that was passed last year, saying that protests, if left uncontrolled, threaten the security and stability of the state.

What to Watch for During the Election

Sisi will undoubtedly win the race, but the election’s conditions and relative outcomes still have some relevance. One question will be whether the election comes off smoothly or if it will be marred by significant violence; a smooth election would be hailed as part of the new order’s success. Another question will be regarding the overall turnout and the margin of victory that Sisi will have over Sabahi. Although the state will certainly have access to the real final election results, the challenge for the public and the international community is that, although there will be local and international monitors at many polling stations, there is no assurance that the results that are eventually announced centrally will be transparent and reliable.

Nevertheless, numbers—whether publicly announced or not—do matter. Most observers accept that about 20 million Egyptians voted in support of the post-Morsi constitution in January of this year, and that number was also generally seen as an endorsement of the post-Morsi order led, directly or indirectly, by Sisi. That was a high number, much higher than the 13.2 million votes received by Morsi in the second round of the presidential election in 2012 or the 10.5 million votes received in the referendum for the Brotherhood constitution in December of 2012. The overall turnout for the presidential election of 2012 was around 26 million, or 52 percent of the eligible electorate. Sisi’s supporters would be very happy if the 20 million of support is maintained, but they might have cause to worry if that number has already slipped significantly since January. A recent Pew poll of 10,000 conducted in late April reports that 54 percent of respondents expressed support for Sisi.

The coalition that coalesced around the June 30, 2013 uprising against the Muslim Brotherhood and supported the July 3 military ouster of Morsi had already frayed later that year. Some members of that coalition were disillusioned or left after the bloodshed that accompanied the removal of the pro-Brotherhood sit-ins, the anti-protest law that came out in November, and the campaign of repression that not only targeted all Brotherhood members but also pro-democracy youth activists such as the April 6 Youth Movement as well as various journalists and civil society activists.

But Sisi still has strong support from a broad coalition: a wide cross section of Egyptians exhausted by three years of upheaval and deteriorating economics and security who want a return to basic stability and economic normalcy; members of the business elite—either members of the Mubarak elite who yearn for a return to crony capitalism or other business elites who feel that stability at the helm of the Egyptian state is necessary to get investments and economic growth going again; older Egyptians who have become disillusioned with the youthful enthusiasm for change and revolution and think back with some nostalgia to the days of relative stability and state leadership from Nasser through Sadat and Mubarak; and many women, minority groups, and Muslim secularists who felt existentially threatened during the Muslim Brotherhood’s rule and view Sisi as someone who saved them from a darker Islamist future.

Broad segments in which Sisi does not have support are, of course, among Muslim Brotherhood supporters; a certain ratio of the youth who did not turn out for the referendum and oppose the return of an army officer to the presidency; some among the Salafis whose main party, al-Nour, is urging Salafis to support Sisi but who did not turn out in large numbers for the referendum, as many followers of the party sympathize with colleagues in the Muslim Brotherhood; and others among the pro-democracy movement or broader public who simply oppose the return—after three years of revolution—to rule by the military more generally. The same Pew poll reported an unfavourable view of Sisi by 45 percent of respondents.

The campaign of Hamdeen Sabahi has been vigorous and gained steam over time. He has been able to travel across the country and put forward his message, which has a strong Nasserite and social solidarity bent. He has gained the support of most youth revolutionaries, old-school Nasserites, and many liberal and center-left parties, in addition to members of social classes that respond to his discourse of social justice and commitment to an amended version of Nasserism. Whether the official results will be known publicly or not, the coalition around him feels that they are gaining valuable experience in organizing and campaigning. They will make their own assessment as to how they perform during the election; if they do well, the experience might give momentum to the emergence of a sustainable and organized political current that could serve as the civilian opposition during the upcoming Sisi administration. This would be healthy for Egypt and for an eventual return to broader democracy. If the campaign does poorly, this might deflate the coalition and push people further away from the political process either toward passivity or to other forms of activism, opposition, and protest.

Getting Elected Is the Easy Part

Once Sisi wins the election he will enter a new and challenging period of his so far meteoric political career. He will own the Egyptian crisis, be responsible for all the state’s successes and failures, and have to make very difficult choices in regard to his three priorities of security, stability, and economic development. Sisi has asked the Egyptian public for a grace period of two years for his actions and initiatives to bear visible fruit in these arenas. There is no doubt that stability is necessary for development. He is betting that stability can be achieved by security measures alone; critics argue that stability must also include a reopening of political space and an easing up of across-the-board repression.

According to some close to him, once he is elected Sisi is unlikely to form a very different government from the current one. The government is likely to remain a technocratic one that focuses on security and administrative and economic tasks, rather than a political one. Some have argued that government formation might be an opportunity to establish a broader political coalition, reach out to emerging political parties, include youth leaders, and find a way to build a bridge with some of political Islam’s public. This does not seem likely, especially not before the parliamentary elections.

Parliamentary elections should be held in the late summer or early fall, and will play a role in giving more color and definition to the spectrum of Egyptian politics in the coming era. Key questions will be whether the Muslim Brotherhood is able and willing to reengage—directly or indirectly—through these elections; whether the coalition around Sabahi will prove to have legs; how the Salafis will fair; and what shape the broad pro-Sisi coalition will take given that the NDP Party is no more.

The current election does not have the dynamism and variety that marked the first round of the 2012 election, when hopes were still high for a quick transition to democracy and stability. But General Sisi is indeed popular and will win this election, while Hamdeen Sabahi has put up a necessary and valiant competitive bid. Sisi will face difficult challenges and rising demands once in office. It is not clear how long his popularity will hold out in the face of very difficult socioeconomic conditions and a security situation that is unlikely to stabilize anytime soon. On the other hand, if he is able to bring back a modicum of stability and show that investment, Gulf aid, and large initiatives are getting the Egyptian economy moving at a healthy pace, he could have a longer tenure.