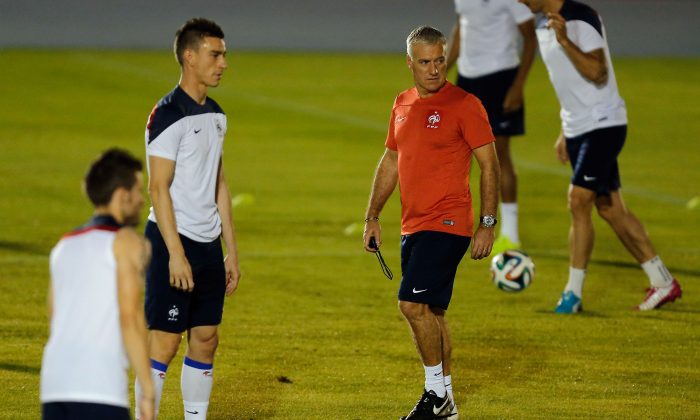 France's head coach Didier Deschamps walks on the field during an official training session at the Joao Havelange Olympic stadium, in Rio de Janeiro, Brazil, Tuesday, June 24, 2014. France will play its next game against Ecuador in group E of the 2014 soccer World Cup. A draw is enough to guarantee top spot for France, and would also send Ecuador through to the next round if Switzerland fails to beat Honduras in the other match. (AP Photo/David Vincent)
Soccer

RIO DE JANEIRO—France coach Didier Deschamps has made six changes to his team to face Ecuador in their final Group E match on Wednesday.

France has six points and needs a draw to guarantee first place, although its superior goal difference means it can advance with a defeat. A draw is enough for Ecuador if Switzerland fails to beat Honduras.

Laurent Koscielny replaces Rapahel Varane at center half, Bacary Sagna comes in for Mathieu Debuchy at right back and Lucas Digne replaces Patrice Evra at left back.

In midfield, Mathieu Schneiderlin replaces the suspended Yohan Cabaye and Paul Pogba returns, while Antoine Griezmann lines up in attack as Mathieu Valbuena and Olivier Giroud drop the bench.

Ecuador has made one change with midfielder Michael Arroyo replacing forward Felipe Caicedo.

Should France still finish as group leader, they will face Nigeria in the second stage. Ecuador will go up against Lionel Messi and co., as Argentina qualified top in Group F.