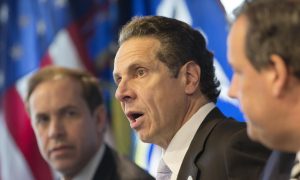 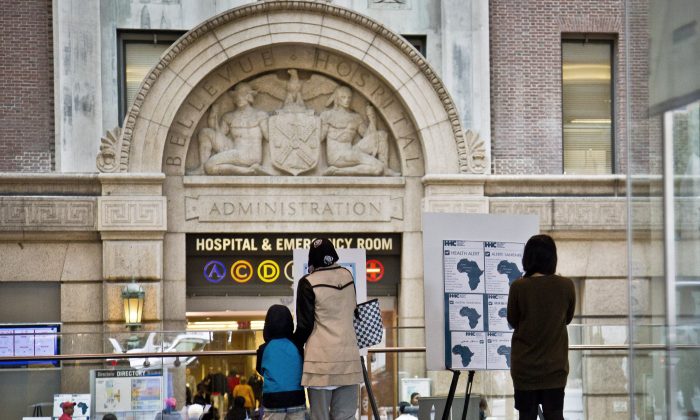 Health alerts for travelers to particular West African countries are seen posted at the main lobby entrance of Bellevue Hospital in New York on Oct. 24, 2014. New York health officials are known for holdings drills on handling emergencies, and Ebola is no exception. Bellevue, the country's oldest public hospital, had been preparing for an Ebola patient in earnest since August. And when Ebola did come to New York via Dr. Craig Spencer, who had been treating patients in Guinea, he was transported to Bellevue by specially trained emergency workers cloaked in protective gear. (AP Photo/Bebeto Matthews)
Health News

Ebola: NY Had Jump-Start, Dallas Had to Learn Fast

By David B. Caruso and Lauran Neergaard
biggersmaller
Print

NEW YORK—Talk about a tale of two cities: A Dallas hospital got a pop quiz in Ebola and made an early mistake. New York got a peek at the answer sheet and was better prepared at the start.

“The lesson I would take from New York is you have to practice,” Dr. Amesh Adalja, a representative of the Infectious Diseases Society of America. “Preparedness isn’t something you just make a plan for and put it on the shelf.”

Ebola came to New York via a doctor who had volunteered to treat patients in Ebola-stricken Guinea. Dr. Craig Spencer alerted his aid agency that he had developed a fever, and was transported to Bellevue Hospital Center by specially trained emergency workers wearing protective gear.

In Dallas last month, a hospital initially sent home a sick Thomas Eric Duncan, who had traveled from Liberia and who days later would become the nation’s first Ebola diagnosis.

A look at differences between the two cases:

New York health officials are known for holdings drills on handling emergencies, and Ebola is no exception. Bellevue, the country’s oldest public hospital, had been preparing in earnest for an Ebola patient since August.

The patient registration staff and triage nurses were trained to ask people with certain symptoms about international travel. Actors posed as patients to be sure that anyone who answered “yes” was immediately put into one of the ER’s nine isolation rooms. Along the way came some false alarms, sick patients who turned out not to have Ebola.

On the seventh floor is the full isolation unit, originally set up to treat people with drug-resistant tuberculosis. It was overhauled for Ebola in recent weeks and now houses a separate lab for Ebola-infected specimens.

Also, “New York has the benefit of being the second city to have an imported Ebola case,” Adalja said.

Duncan had told an emergency room nurse he recently had arrived from West Africa, and he temporarily spiked a 103-degree fever shortly before his discharge. He returned two days later, sicker, and then was tested for Ebola. He died Oct. 8. Two nurses who cared for him became infected; both have since been declared virus-free.

On Friday, the Dallas hospital announced some changes, saying it had learned from its experiences treating Duncan and was sharing them with other hospitals in a stark then-and-now chart.

Patients will be asked about their travels within five minutes of entering the ER. Electronic medical records will highlight that information in a large red box. Nurses and doctors are encouraged to talk face to face rather than rely solely on records.

A new triage procedure calls for high-risk patients to be isolated immediately by a nurse in full protective gear. Before discharge, vital signs are to be rechecked and doctors notified of abnormalities.

“We learn more each day and we will continue to share these important lessons with the health care community and first responders nationwide,” said Barclay Berdan, chief executive of Texas Health Resources, the hospital’s parent company.

Dr. Michael Bell of the Centers for Disease Control and Prevention began working with the hospital after the nurses became ill, stressing improved infection control as a possible legacy.

The National Institutes of Health and other hospitals with special biocontainment units regularly “do drills about how you need to protect yourself,” said Dr. Anthony Fauci, the NIH’s infectious diseases chief. The Dallas hospital had transferred infected nurse Nina Pham to NIH; she was discharged Friday.

The isolation unit at Nebraska Medical Center, which has treated two other Ebola patients infected abroad, says it holds drills about every three months on different diseases.

Before the New York case, Fauci praised Bellevue for similar training, while cautioning that, “it would be, logistically, really difficult to get every major hospital in the country drilled to do this.”

The government is adjusting to gaps in the Ebola safety net.

Facing its own criticism for not helping the Dallas hospital enough, the CDC has tightened guidelines on protective gear, and greatly expanded education for hospitals and health workers. The agency will send SWAT-like response teams to help hospitals with cases.

Anyone flying in from Ebola-stricken West African countries now is funneled through five U.S. airports for symptom checks and must report their temperature to local health officials for 21 days, Ebola’s incubation period.

The governors of New York and New Jersey went a step further, ordering quarantine for travelers who’ve had contact with Ebola patients.

Adjustments are part of dealing with a public health emergency, said Michael Leavitt, who served as Health and Human Services secretary for President George W. Bush.

“In the midst of a crisis, we ought not to expect perfection,” Leavitt said. While that doesn’t excuse mistakes, “everyone in this process is going to be acting, adapting, improving. That’s the nature of emergency response.”