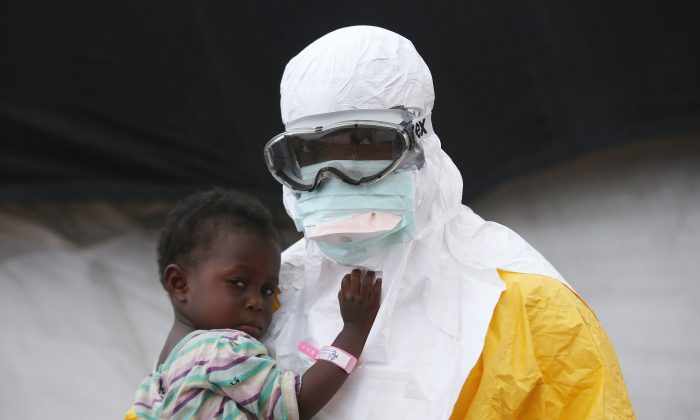 A Doctors Without Borders (MSF), health worker in protective clothing holds a child suspected of having Ebola in the MSF treatment center on October 5, 2014 in Paynesville, Liberia. (John Moore/Getty Images)
Good to Know

Ebola Isn’t Going to Spread Through the Air

During the peak of the Ebola epidemic last fall a frightening new possibility surfaced: Could a specific mutation allow the disease to spread through the air?

New data from current and past Ebola outbreaks dispels that concern.

In August, researchers discovered that genetic changes in the virus were occurring twice as fast as previously seen. In September, a researcher from the United States raised a red flag by suggesting the virus could mutate to become transmissible through the air.

For the current study, researchers led by Marco Salemi of the Pathology and Emerging Pathogens Institute at University of Florida, looked at samples from patients and great apes collected during Ebola epidemics from 1976 through 2014.

They discovered most genetic changes are lost between epidemic waves. There was little evidence to support the evolution of a more powerful or transmissible virus.

That’s good news not only for Central and West Africa, but for researchers developing tests, vaccines, and treatments for Ebola.

While concern about airborne Ebola may persist, the likelihood of the virus becoming an airborne infection is extremely low, says Taj Azarian, the lead author of the study, published in Nature Science Reports.

“We know of no virus that has radically changed its mode of transmission due to genetic mutations,” he says. “It seems the Ebola virus is more stable than earlier studies suggested.”