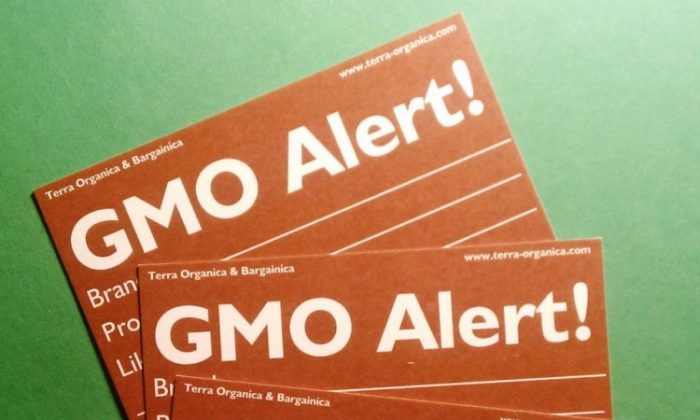 Tired of waiting for legislators to mandate a label for genetically engineered foods, a grocery store in Bellingham, Wash., Terra Organica and Bargainica, has began making its own. (Stephen Trinkaus)
Health

Eating in the Dark

If food manufacturers think we'll stop eating foods that we know are genetically modified, maybe they shouldn't sell them

I’m sick of it because there’s really [only] one thing to say, and I’ve said it before: Americans have a right to know how their food is produced. Period.

Does it matter? That’s up to each individual.

The pushback against labeling genetically engineered foods is simply an admission by manufacturers that we wouldn’t want to eat their food if we knew what they were putting in it.

Just like it’s up to you whether you care if your food is kosher, gluten-free, low-carb, or anything else. You can decide whether it’s worth it to you to buy cage-free eggs or not, because the eggs are labeled. That doesn’t take freedom away from someone else who wishes to make a different choice than you.

The labeling fight is an old one. Food companies don’t want to add any label that might make you less likely to buy their products.

For example, they don’t want to add easy-to-read “traffic light” labels that give each product a health rating of green (“Yes! Eat this!”), yellow (“Think before you eat”), or red (“This is really bad for you”). In studies, consumers find these labels really easy to use—so naturally businesses that sell junk food hate them.

On the flipside, food companies do want to add labels that make their products look more attractive—even if the labels are misleading. Like the time orange juice from concentrate was mislabeled as “fresh.” Or when Cheerios promised to lower your cholesterol, even though the claim was unproven.

In the land of the free, we ought to have the freedom to decide what to put in our mouths.

Sometimes, food manufacturers even make up voluntary labeling systems to show consumers which of their foods are healthiest, like the corporate-backed Smart Choices Program that labeled sugary Froot Loops a “smart choice.” When pressed, they defended the claim by noting that Froot Loops cereal is healthier than, say, a donut.

Organic Gemini’s Founders Live on Tiger Nuts. They Hope You Will Too.

The pushback against labeling genetically engineered foods is simply an admission by manufacturers that we wouldn’t want to eat their food if we knew what they were putting in it.

You know what, then? Maybe don’t put it in the food.

But, they tell us, genetically engineered ingredients are safe.

OK, fine. Put them in the food and label it. And if you’re afraid consumers won’t buy it, make your case to the American people why we should eat it. Because Americans shouldn’t have to eat in the dark. In the land of the free, we ought to have the freedom to decide what to put in our mouths.

Speaking of eating in the dark, the Senate recently came close to voting on legislation that its critics call the “DARK” Act. That stands for Deny Americans the Right to Know, and that’s exactly what this kind of law would do.

It’s a common game in food politics: When individual states finally do what the federal government won’t—as Vermont recently did by requiring labels—industry opponents go to Congress to ban the regulations everywhere.

The tactic is completely undemocratic.

Whatever you think about genetically engineered foods, Big Food is proving again and again that its politics may be its most unappetizing product of all.