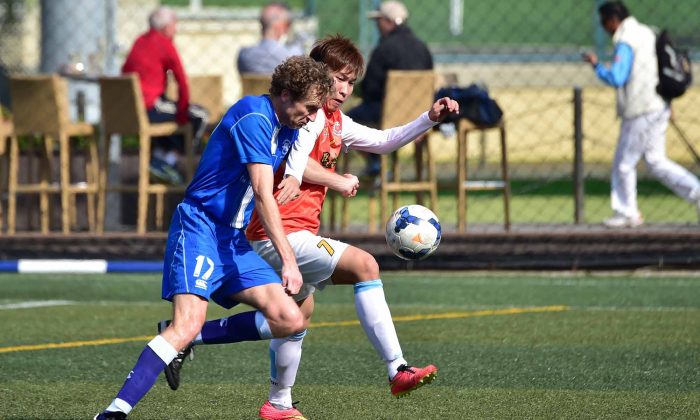 Double Flower winger gets held up by Mark Vrijmoed of Lucky Mile (blue kit) when trying to set up a cross to goal in their HKFA First Division game at Sports Road on Sunday Dec. 14, 2014. Lucky Mile went on to win the match 4-nil. (Bill Cox/Epoch Times)
HK Football

Eastern Defeat BC Rangers to Stay Top of Premier

HONG KONG—There were two BOCG Life Hong Kong Premier League games this weekend with one game on both Saturday Dec 13 and Sunday Dec. 14. Saturday’s game at Hong Kong Stadium ended in a 5-2 win for South China against I-Sky Yuen Long, while Sunday’s game at Kowloon Bay Park ended in a 1-nil victory for Eastern over BC Rangers.

In Saturday’s game, South China took the lead in the 36th minute when Yuto Nakamura scored direct from a free kick. Yuto Nakamura then doubled his and South China’s tally when he scored his second in the 43rd minute, converting Lo Kong-wai’s cross from the right wing, for a 2-nil half time lead.

South China further increased their lead in the 50th minute when Evan Kostopoulos fired home from Che Runqui’s cross, and extended their lead with a fourth goal in the 61st minute when Kwok Kin-pong fed Lo Kong-wai to finish.

Sunday’s (Dec. 14) game was settled in Eastern’s favor when Giovane Da Silva scored the only goal of the game in the 75th minute.

The Premier League standings are led by Eastern with 16 points from 7 matches, and Sun Pegasus, with 16-points from 8-matches; South China are third with 15 points from 8 matches, with Kitchee fourth with 13 points from 5 matches.

Metro Gallery Sun Source (MGSS) and HKFC are joint leaders on 35 points with MGSS having a game in hand, Yau Tsim Mong are third on 30 points, with Southern fourth on 28 points having played one game less than MGSS and 2 less than HKFC, and Shatin are fifth on 26 points from the same number of games as MGSS.

HKFA Second Division
There were no games played in this division this weekend.

Wing Yee lead the 2nd division table on 31 points, followed by Mutual on 25 points, Kowloon City on 24 points, Kwong Wah on 23 points, and Sai Kung on 22 points, all teams having played the same number of games.

HKFA Third Division
There were no games played in this division this weekend.

Tung Sing lead the division on 35 points, ahead of Central & Western on 29 points, Fukien and St Joseph’s on 26 points, and Islands on 25 points.

Yau Yee League
League action in all divisions this weekend was replaced with the second round of matches in the Yau Yee League Cup competition which included the first division sides for the first time. In most of the games, the teams from the higher divisions generally prevailed, with victories for KCC Dragons, USRC, French Kiss, Interglobo Colloids, GAS, Club Albion, KCC Knights, The Store House Hearts, Boca Seniors, Baker Tilly Spartans, Power 22, Azzurri, Swiss XI, HKSS, and the Store House Squadron, though 3 of the encounters required penalties to decide the outcome.

In the Store House Squadron match against Wanderers at Sports Road, Wanderers took the lead after 17 minutes when Neil Shonhard volleyed home from 10 yards out into the bottom left-hand corner of the net from a cross from the right wing. After posing little threat for most of the half, the Store House Squadron equalised in the 35th minute when Joss Payne was allowed to run unchallenged into the penalty box from 40 yards out, before firing a shot into the net past goalkeeper James Seddon and a 1-all half time scoreline.

In the 53rd minute, Steve Everest hit the post, and Christophe Saune fired over.
Wanderers restored their lead in the 60th minute when Simon Galvin, after having his throw on the right wing returned to him, crossed to the far post where Danny Beattie headed the ball square into the 6 yard box and Steve Everest hooked the ball into the net from close range. With the game in the 3rd minute of time added on, Magnus Soerensen equalised for Squadron to take the game to penalties.

All 5 of Squadron’s penalty takers scored, whilst goalkeeper saved Wanderer’s second penalty from Danny Beattie to win the tie.