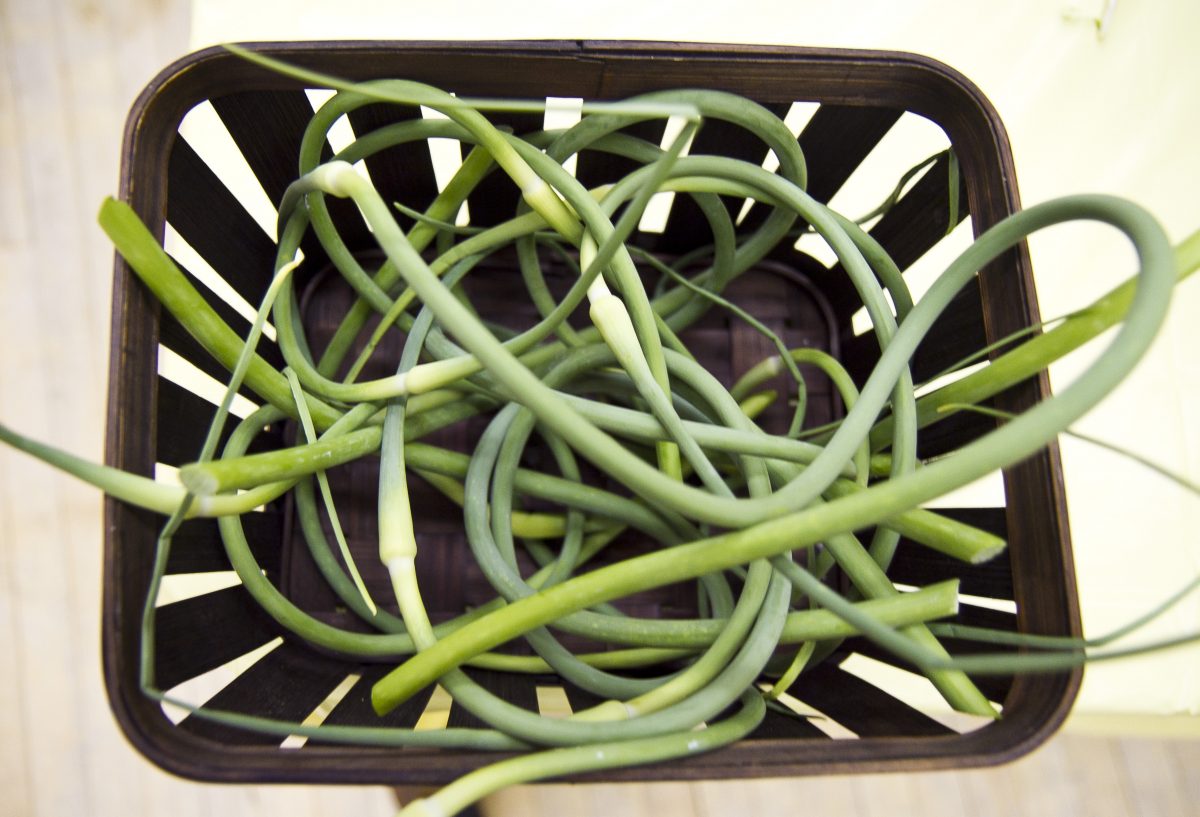 A volunteer donated garlic scapes from his garden to give to Brooklyn gardeners at a superfoods educational event in East New York on June 13. (Amelia Pang/Epoch Times Staff)
Health

In East New York, an Unlikely Oasis for Superfoods

Residents from diverse cultures share ingredients and nutrients with the community
BY Amelia Pang TIMEJune 18, 2013 PRINT

NEW YORK—What began as helping a a few people sell their garden vegetables on a street corner has now expanded to 60 farms in an area where you would not expect it, the fresh food desert of East New York in Brooklyn.

Although a myriad of local entrepreneurs and upstate farmers have played a pivotal role in this surge of access to fresh food, some say it is the resilience of the community that started to tip the scale.

“We don’t go places and say people have to come, we give these events because people request it, people want them,” said Maureen O’Brien, GreenBridge Community field manager.

GreenBridge is a community environmental horticulture program of the Brooklyn Botanic Garden. The program organizes events and workshops that promote urban greening through education and conservation. Many of the events are free.

Working with block associations, community gardens, and other community groups to find out what people are most interested in learning, GreenBridge launched a series of green educational events throughout Brooklyn, such as one that teaches people how to grow and eat superfoods from their own gardens

At the June 13 event, it turned out that most attendees were already avid gardeners, and the event quickly turned into an exciting discussion about growing tips, nutritional advice, and recipes.

The GreenBridge organizers also gave out seeds and plants for workshop attendees to take back to their gardens.

“Many people don’t have healthy eating habits, but when there’s a community garden in the area, it really teaches them a lot,” said Ruth Manning, a retired resident of Brooklyn. “It helps them change their diet.”

A community gardener touched on how there is often very limited, if any, fresh food at their local grocery stores. This prompted her to take up gardening in her backyard.

“We are consumers in the community who have the power to change things if we stop buying these products,” said a local woman at the event who did not wish her name to be published.

“Sadly, there are many people who still buy these products,” she added. “But if more of us stopped buying from them, the sooner they will start bringing fresh food to us.”

Yet community gardening can be about more than just access to healthy foods.

“A lot of people in the community are recent immigrants or migrants, it means a lot for them to be able to connect with the food that they ate back home,” she added.

East New York has a large population of residents with Caribbean origins.

Many exotic crops can be found in East New York gardens—such as callaloo, Malabar spinach, hot Scotch bonnet pepper, and even bitter melon.

The top four superfoods promoted at the event were kale, Swiss chard, turnip, and spinach because most of these vegetables can grow in cool weather.

The focus was on kale.

A package of educational materials was handed out, including personal recipes, clippings from Just Food, as well as nutrition facts from Organic Gardening Magazine.

According to Organic Gardening Magazine, kale is high in carotenoids, an antioxidant that can fight some forms of cancer and heart disease.

Like broccoli and cabbage, kale stimulates the liver to make enzymes that break down cancer-causing molecules.

Kale is also a good source for Vitamin A, which protects lungs from cigarette smoke. One cup of cooked kale provides more than 300 percent of your recommended daily needs for vitamin A.

Kale takes two months to mature from seed. They grow in cold weather so they are great for planting in Brooklyn.

O’Brien warned that gardeners should ensure kale plants are not placed too close to one another when growing, because they can cause wounds by rubbing against one another, which attracts pests.

She added that kale can be picked and eaten at different stages, even at the baby stage.

One gardener commented how she rarely ate kale until she learned of its nutritional worth.

Swiss chards were also noted as very nutritious greens because it contains phytonutrients that prevent digestive cancers, according to the magazine.

It is better to grow chards once in spring and again in late summer because this vegetable tastes bitter when it’s too mature.

Turnips were another superfood. They provide a high amount of vitamins C and E, which destroys free radicals before they dissolve the joint-protecting membranes.

They also help guard against rheumatoid arthritis. Turnip greens contain copper, a mineral your body needs to rebuild connective tissue as well as reduce the risk of colon cancer.

Turnips grow best in the fall because gardeners can harvest it during cool seasons.

Last but not least, Popeye had it right: spinach is definitely a superfood. It not only makes you stronger, but it can prevent headaches. Spinach is a strong source for magnesium, which helps with migraines.

Gemma Garcia has been the long-time St. John Cantius Community Garden coordinator in East New York. She dedicates some of her time to teaching local residents how to garden.

She is originally from Trinidad, and wanted to share her Calaloo Soup recipe with her community.

Strip the stalk and midrib from the leaves.

Soak and slice salted beef or salted pork in bite-size pieces. It is usually better to boil first to soften the meat. Drain the salt water.

Add whole hot pepper, let the soup boil, and allow it to simmer for about 30 minutes or until all the ingredients become soft.

When it’s ready, remove the large pieces first from the pot—such as meat, crab, and pepper.

Be gentle when removing pepper in order to avoid it breaking in the pot.

Pour soup into blender and mix it for two or three seconds.

Put everything back into the pot; add butter/oil, salt, and pepper.