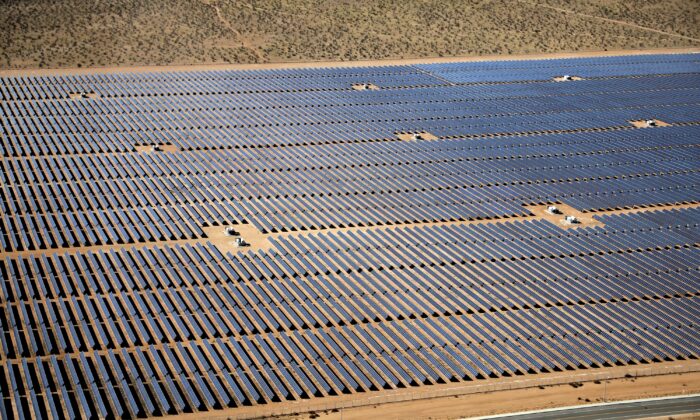 An array of solar panels is seen in the desert near Victorville, Calif., on March 28, 2018. (Lucy Nicholson/Reuters)
Congress

Earmarks Include Big-Ticket Spending on Environment and Climate

With the return of earmarks after a decade-long moratorium, Democrats and Republicans alike have dedicated significant discretionary spending to projects advertised as protecting the environment.

The Epoch Times examined a Bipartisan Policy Center spreadsheet on earmarks, also referred to as congressionally directed spending, from the March omnibus legislation.

The largest single environmental earmark is also the largest earmark in the entire package. It was requested by a Republican, Rep. Brian Mast (R-Fla.).

Mast obtained $350 million for the U.S. Army Corps of Engineers for Everglades restoration through the Corps’ South Florida Ecosystem Restoration Program. This added to the $1.1 billion the program received following the passage of last year’s infrastructure legislation.

The Bipartisan Policy Center’s spreadsheet shows that major earmark requests are a bipartisan phenomenon, although not always in a clean-cut way.

Shelby’s embrace of earmarks comes as no surprise, as he joined Murkowski, Sen. Susan Collins (R-Maine), and some other Republicans in objecting to the initial earmark ban during debates in late 2010.

Overall, however, Democrats obtained $5.23 billion in earmarks, more than the $4.4 billion obtained by Republicans. Republicans in the House and Senate also only secured about a third as many individual earmarks as their Democratic colleagues.

Most Republicans in the conservative House Freedom Caucus didn’t request any earmarks.

Yet a new analysis from The Epoch Times has revealed that some lawmakers affiliated with the caucus did in fact receive earmarks, despite the group previously stating that it “opposes earmarks, whether in the 117th Congress or any future Congress.”

AOC, Other Democrats Spend in Name of Climate Change

While earmarks are popular on both sides of the aisle, Democrats were almost alone in explicitly requesting money in the name of climate.

For example, while ‘climate’ is referenced by name in 15 earmarks from Democrats, only one Republican, Rep. Adam Kinzinger (R-Ill.), requested money in an earmark that directly referenced climate.

Kinzinger sought and received $660,000 for Northern Illinois University for “Understanding and Mitigating Future Weather and Climate Risks to Agriculture.”

Of course, not all funding ultimately connected with climate literally includes the word ‘climate.’ Such spending encompasses earmarks related to the heavily promoted energy transition from hydrocarbons to wind, solar, and other renewables.

Rep. Alexandria Ocasio-Cortez (D-N.Y.), a member of the Democratic Socialists of America (DSA), requested $800,000 “for offshore wind energy training program, including equipment” at SUNY Maritime College in the Bronx—similar to the more than $1 million in funding for an offshore wind technician training program at the University of Delaware obtained by Sen. Tom Carper (D-Del.).

While “coastal preservation” may sound like a reference to coastal erosion caused by climate change, a look at the group’s “About” page suggests that they have a more narrow focus on shoreline cleanups and parkland improvements in College Point, a neighborhood in Queens, New York.

In a statement describing her close to $7 million in total earmark spending, Ocasio-Cortez explained the Coastal Preservation Network earmark by saying that “there are currently very few sites where College Point residents can go and safely enjoy the views available in their coastal community.”

Yet a look at Google Maps suggests that the neighborhood has multiple parks or public lands along the coast, including Hermon A. MacNeil Park and Powell’s Cove Park.

While those parks look out across the East River at nearby parks in the Bronx, including Ferry Point Park and the Trump Golf Links at Ferry Point, the on-water platforms funded by the new earmark look out across Flushing Bay toward LaGuardia Airport and Rikers Island, which used to house New York’s main jail.

“There are some locations in College Point with waterfront views. But on the south end of College Point (bordering Flushing) where the platforms are located, there is little public access to the waterfront,” said Kathryn Cervino, president of the Coastal Preservation Network, in an email response to The Epoch Times.

“This part of town is much more densely populated due to zoning variations within town. The only other public spot where people can access the waterfront in south College Point is Big Rock Beach, which has been neglected and heavily polluted for decades, with no one caring for it.”

When asked about existing open space in College Point, an Ocasio-Cortez spokesperson told The Epoch Times, “We certainly find the allocation of federal funds to stabilize water platforms that allow families to enjoy the outdoors to be a worthy use.”

Solar Power, ‘Grid Resilience and Equity,’ and Electrification Funded, Too

In addition, Evanston, Illinois, which has been ranked the Midwest’s fourth wealthiest town, received $500,000 for an accessible solar power program through a request from Sen. Dick Durbin (D-Ill.), a member of the Senate Appropriations Committee.

Along similar lines, the Delaware Department of Natural Resources and Environmental Control received $2 million for “reducing inequity in access to solar power,” through a request from Carper.

Republican earmarks related to renewable energy include $2.5 million to the Qawalangin Tribe of Unalaska for a geothermal project, a request from Murkowski. She received $2 million for a pilot electric ferry project as well.

For example, the University of Massachusetts at Amherst received $995,000 for “Grid Resilience and Equity in the Energy Transition,” thanks to the efforts of Sen. Ed Markey (D-Mass.).

George Mason University received almost $2 million for the “Virginia Climate Center,” the result of a request from Rep. Gerald Connolly (D-Va.), while Morehouse College received more than $1.4 million for “an environmental justice and sustainability program,” as requested by Sen. Raphael Warnock (D-Ga.).

Rep. Donald S. Beyer, Jr. (D-Va.) was the recipient of almost $400,000 for “Electric School Bus and Associated Electric Vehicle (EV) Charging Infrastructure” in Falls Church, Virginia, an affluent Washington suburb in what has been ranked the second wealthiest county in the United States.

Not all of the most striking environmental funding was related to climate.

Sen. Richard Blumenthal (D-Conn.) received $569,000 for the “Removal of Derelict Lobster Pots” by the Maritime Aquarium at Norwalk.

Finally, and on the costlier side, Sen. Jon Ossoff (D-Ga.) obtained $8 million for an environmental impact statement on a proposed passenger rail route connecting Atlanta with Savannah.