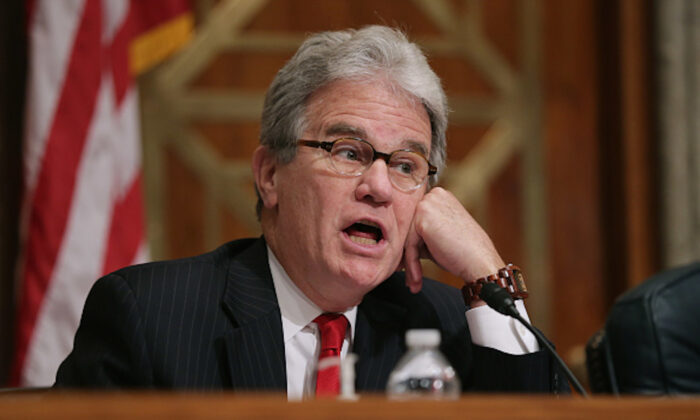 Sen. Tom Coburn (R-Okla.) questions witnesses about military equipment given to local law enforcement departments by the federal government during a Senate Homeland Security and Governmental Affairs Committee hearing about at the Dirksen Senate Office Building on Capitol Hill in DC, on Sept.9, 2014. (Chip Somodevilla/Getty Images)
US

Congress Falls Off Wagon, Leaps Back Into Pork Barrel With $9.6 Billion in New Earmarks

The late Sen. Tom Coburn (R-Okla.) earned his “Dr. No” nickname in the U.S. Senate with his determined opposition to earmarks, which he called “the gateway drug for federal spending addiction” that hooks so many senators and representatives.

But Democrats and Republicans agreed last year to bring earmarks back, only with a new name, “Congressionally Directed Spending,” and with new disclosure provisions intended to highlight sponsoring senators and representatives. Coburn, who died in 2020 of prostate cancer, wasn’t around to see the return of earmarks.

Consequently, the recently enacted $1.5 trillion continuing resolution that funds the federal government through September contains nearly 5,000 earmarks collectively valued at more than $9.6 billion, according to an Epoch Times analysis of a database compiled by the Bipartisan Policy Center (BPC).

The BPC used a sophisticated software program to convert official congressional data that was released in PDF format into a searchable Excel database. In compiling totals for individual officials, The Epoch Times counted only those earmarks for which the senator or representative was listed as the “First Requestor.”

The return to earmarks was a bipartisan affair, as seen in the fact Democrats and Republicans alike secured millions of dollars in such provisions.

Senate Majority Leader Chuck Schumer (D-N.Y.) got 41 earmarks totaling more than $49 million and averaging $1.2 million each. Senate Minority Leader Mitch McConnell (R-Ky.) wasn’t listed in connection with any earmarks, but he issued a March 11 statement in which he claimed credit for helping “secure” multiple spending provisions in Kentucky.

Sen. Richard Durbin (D-Ill.), the Senate’s No. 2 Democrat, did even better than Schumer, pulling down 66 earmarks totaling $121 million and averaging $1.8 million each.

By contrast, Sen. John Thune (R-S.D.), McConnell’s No. 2, was credited with one earmark, but it was a big one: $30 million for repairing an important interstate highway exchange.

Forty-six of the Senate’s 50 Democrats and 16 of the 50 Senate Republicans requested earmarks.

On the House side, Democrats got 2022 earmarks valued at nearly $2.5 billion and averaging $1.2 million each. Representatives were limited to 10 first requestor earmarks, and virtually every House Democrat received at least nine, with many hitting the ceiling.

House Republicans took in 717 earmarks collectively worth $1.7 billion and averaging nearly $2.4 million each. Most of the House GOPers who got earmarks received five or six each.

Among Republican leaders, House Minority Leader Kevin McCarthy (R-Calif.) was listed as having no first requestor earmarks, while his No. 2, Rep. Steve Scalise (R-La.), had four earmarks with a total value of $11.3 million and averaging $2.8 million each.

With nearly 5,000 individual earmarks only recently being made public and details of the particular projects often difficult to obtain, media sleuths and nonprofit advocacy groups that oppose earmarks are just getting started digging into the new pork-barrel spending.

But questionable earmarks are already being found, with Taxpayers for Common Sense (TPC) pointing to the Building Resilient Infrastructure and Communities (BRIC) program, which is linked to 68 earmarks worth a total of $154 million.

“Last year, BRIC received $4.7 billion in funding requests for the $1.16 billion available. Worthy projects are routinely turned away or deferred to future years. But some of this year’s earmarked projects are ones that didn’t score high enough on the competitive award process to get funded,” according to TPC.

“In fact, at least two of the earmarked projects were rejected by BRIC last year because they cost more than the benefits projected to come from them. In other words, they are net losers for taxpayers and thus not eligible for BRIC funding. Lawmakers funded these projects anyway, getting money ahead of other communities that followed the program’s rules.”

If the past is prologue, the TPC’s discoveries are likely to be the first of many more to come as more details are learned of the 2022 return of earmarks.