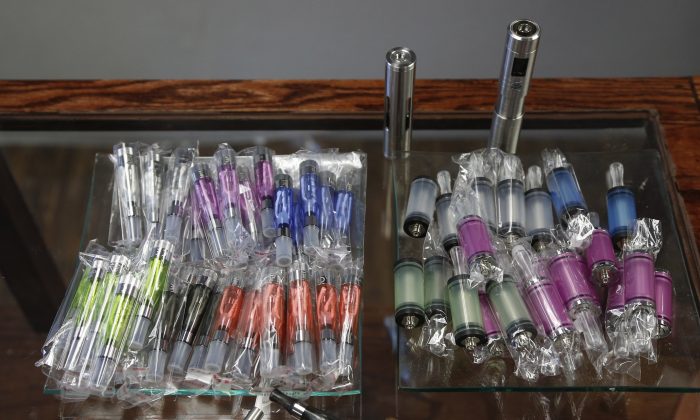 A file photo of electronic cigarettes at the OKC Vapor shop in Oklahoma City on April 19, 2013. E-cigarettes will now be regulated like medicine in the U.K., the government announced June 12, 2013. (AP Photo/Sue Ogrocki)
Health

E-cigarettes Regulated as Medicine in UK After Product Concerns

E-cigarettes will now be regulated as medicines in the U.K. the government announced Wednesday, with a plan to extend the regulation to the whole European Union.

Some of the devices  have been shown to cause minor adverse health effects. Electronic cigarettes, or e-cigarettes are battery-powered cartridges that heat a liquid solution with various flavors (with or without nicotine); they are often used by smokers as an aid for quitting.

According to a statement on the risk associated with e-cigarettes made by the National Institute for Health Care Excellence (NICE), trials show affects including throat irritation, coughing, nausea, vertigo/dizziness, vomiting, and palpitations.

NICE reported these effects are common, but “tend to be mild or moderate and are rarely severe.” NICE also notes that long-term effects have not been studied.

The Medicines and Healthcare products Regulatory Agency (MHRA) will now regulate all nicotine-containing products (NCPs), including e-cigarettes. Jeremy Mean, MHRA’s group manager of vigilance and risk management of medicines said, according to a MHRA press release:  “It’s not about banning products that some people find useful, it’s about making sure that smokers have an effective alternative that they can rely on to meet their needs.”

The U.K. government will press the EU to take the same stance. According to MHRA, the European Commission concurs, and expects to adopt the legislation and put it into effect by 2016.

On May1 in Italy, legislation came into effect placing the same age restrictions on e-cigarettes as on tobacco products. Italian health studies also found the devices could be harmful.

A pharmaceutical company executive in Florence, Italy, who wished to remain anonymous told The Epoch Times in May: “I used to smoke more than a pack a day, then I tried [e-cigarettes] thanks to a friend. I stopped using traditional cigarettes. I feel better physically and I’m saving money. I am amazed by the polemic concerning the alleged harmfulness of electronic cigarettes. I think it is a matter of loss of money for the government, which can’t apply taxation to them yet.”

An Italian consumer association report showed a 25 percent increase in e-cigarette sales from 2011 to 2012—with sales totaling about 90 million euros ($11.5 million) for the year.

The U.S. Food and Drug Administration has regulated e-cigarettes as it does regular tobacco-filled cigarettes and other tobacco products since 2011.