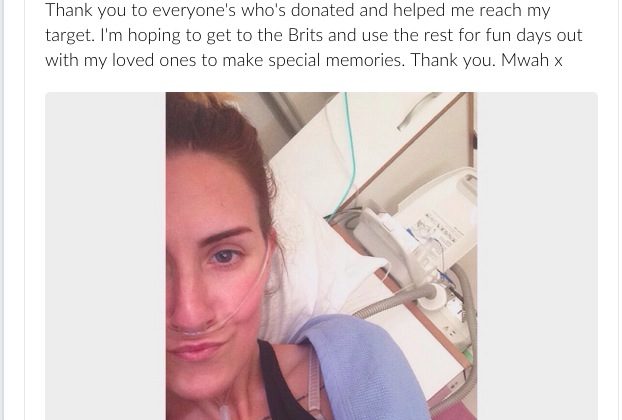 Channan Petrides, just 22, suffers from cystic fibrosis (CF) and with deteriorating health, doctors gave her roughly a year to live. There’s a chance she could pull through with a lifesaving heart and lung transplant, but that would mean living out what could be her last days lying in a hospital bed waiting to see if a match came through.

And even if it did, the doctors said she could die on the operating table or her body could reject the organs and she’d be dead in six months.

Petrides doesn’t have many choices, but she made a choice many people find it hard to accept: She chose to live the time she has left to the fullest and removed herself from the organ donation wait list.

She then replaced the wait list with a bucket list full of items any 22-year-old in the U.K. might include—spa weekend (check), Disneyland Paris (not yet), helicopter ride (check), meet a penguin (check), meet Ed Sheeran ??? (not yet), and walk on the red carpet at the Brit Awards (not yet).

She’s also ardent about using her time to raise awareness about CF and added “GO VIRAL” to her dying aspirations.

On May 26, she created a gofundme campaign to accomplish the mission of funding her bucket list and informing people about CF. “It is a slow, painful, suffocating condition,” she writes on the campaign page. “Please help me make this viral, ticking another thing off my bucket list, to raise awareness & one day find a cure.”

As of this writing she had raised nearly 4,000 pounds (about $6,100), she had to stop accepting new Facebook friends, and her story has been covered in several U.K. and Australian publications. She ticked “GO VIRAL” off her bucket list already, but likely her story will spread further.

CF is an inherited condition that causes severe damage to the lungs and digestive system. The fluids a normal person secretes in the form of sweat or digestive juices, for a CF sufferer those fluids become thick and sticky, clogging up tubes, ducts, and passageways. The condition is normally diagnosed by the age of 2. In the 1950s, a child with CF usually wouldn’t make it to elementary school, but with treatments today, some sufferers can live into their 30s or 40s.

In her most recent post on June 6, she wrote: “Do these morons telling me I’m selfish for not having the transplant on TheLADBibles post really think their negative opinions are gonna affect me when I’m dealing with everything I’m going through just fine? Lol I don’t think so.”

She’s posting about everything. The items she ticks off her bucket list, her state of health, dates she’s suddenly being asked on, selfies, and comments about the world around her.

On May 24, she wrote: “Had the best day in a helicopter over London with my bestest. & my lungs didn’t collapse.”

View from the sky pic.twitter.com/SG27rR24Ar

Barely a week earlier she had never been in a plane.

May 16 she wrote on Facebook: “My nurses today have let me sleep for 15 hours with no disturbance (heaven) has also blow dried my hair for me so I have energy to straighten it, and one went on holiday a few weeks ago and remembered I hadn’t been on a plane or seen the inside of one so she’s took [sic] pictures for me. It’s the little things in life that mean the most and can make someone’s day. I think the NHS nurses at barts are truly amazing and they treat me like family.”

“Having another serious chest infection causing more chronic chest pains, every bone in my body aching from inflammation my carbon dioxide levels high not to mention my haemoglobin and oxygen levels getting lower my sleeping pattern getting longer and my physical strength getting more useless by the day the support and love I receive from my friends, family and even strangers makes a bad day bare able so thank you.”

Being told I’ve made someone smile is the best feeling