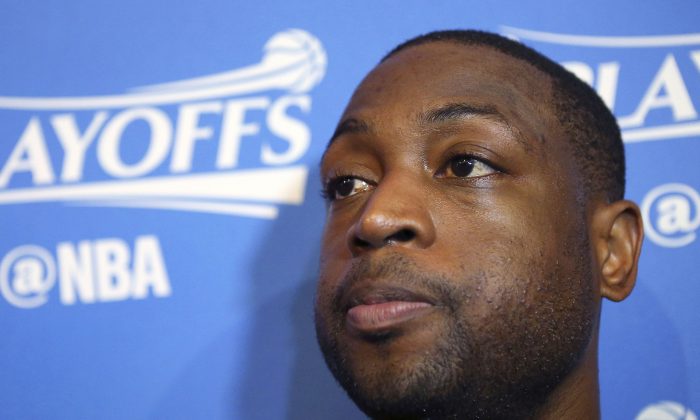 FILE - In this April 28, 2016, file photo, then-Miami Heat guard Dwyane Wade, speaks with the media after basketball practice in Miami. Wade has lashed out against his hometown of Chicago's gun laws, calling them weak and saying he's already urged city officials to enact changes to help both citizens and police. Wade spoke out to ABC News in an interview that aired Friday, one day before the funeral for his cousin Nykea Aldridge — a mother of four who was shot and killed on a Chicago street last week. (David Santiago/El Nuevo Herald via AP, File)
Crime and Incidents

Dwyane Wade has lashed out against Chicago’s gun laws, calling them weak and saying he’s urged officials in his hometown to enact changes to make the city safer.

The Chicago Bulls star, whose cousin was shot dead last week, also said his children are afraid of police officers in the same way he was growing up and that prisons need to better rehabilitate inmates. Wade added that he was left with “a bad taste” in his mouth when Republican presidential candidate Donald Trump tweeted about his cousin’s murder.

Wade spoke to ABC News in an interview broadcast Friday. The funeral for Nykea Aldridge, a mother of four who was killed on a Chicago street, is Saturday.

“For our family, it was very tough,” Wade said.

Aldridge was one of 90 people killed in August in Chicago, a city that has been ravaged by gun violence and once had some of the nation’s strictest gun-control laws, many of which are no longer on the books. Wade is returning to Chicago this season after spending the first 13 years of his pro career with the Miami Heat.

“My purpose for being back in the city is bigger than basketball,” Wade said. “Basketball is a big part of it, of course. It’s what I do for a living. But I think my purpose at the end of the day is hopefully to come to Chicago and be a part and be the voice that can help bring people together.”

Aldridge, 32, was pushing her baby in a stroller near a school where she’d planned to register her children when she was shot in the head and arm. She wasn’t the intended target, police said.

Two brothers have been charged with her killing.

Chicago’s 90 homicides in August match the city’s most in any month since August 1996. Chicago police say 5,900 illegal guns have been confiscated this year already, and have said a fifth of the guns used in crimes in the city come in from neighboring Indiana.

“They are fighting a war,” Wade said of Chicago police. “And they can do a lot better, but they can get more help as well to do better. There’s other cities that have way tougher gun laws. We have weak gun laws.”

The Chicago Police Department responded in a statement that making the city safer will depend on strong partnerships with the community and help to keep repeat gun offenders off the streets.

“We will continue to target the gangs that drive the majority of violence,” said department spokesman Anthony Guglielmi. “But with nearly half of those we arrest for murder being repeated gun offenders, we need help to ensure these individuals stay off our streets after repeated arrests for guns.”

Darwin Sorrells Jr., 26, and Derren Sorrells, 22, are being held without bail on a first-degree murder charge in Aldridge’s death. The brothers have extensive criminal histories and were parolees.

“Guys go to prison and then we let them back out on the street, they’re going to go back to what they’re used to and what they know,” Wade said. “So if there’s something we can do with the prison that can help with work programs when people come out, it gives them an opportunity to try to help themselves.”

Wade has spoken out about social and race-related issues several times, including the shooting of unarmed Florida teen Trayvon Martin and the recent rash of high-profile police shootings.

He said the three boys he’s raising — two sons and a nephew — are old enough to understand the issues.

“My boys are afraid of police just the same way I was when I was growing up,” Wade said. “Not all police, obviously. But my boys hear everything that’s going on in the world, all the harassment, all the murders that’s going on and they pose the question back to me. And what answer do I have for them?”

Wade will hold an event in Miami on Sept. 17 to promote cycling safety and unity in the community, and Miami police officers plan to pedal alongside him on the six-mile bike ride.

In the ABC interview, Wade was also asked how he felt about Trump tweeting about his cousin’s death. Wade said he felt conflicted.

“On one end, your cousin’s death is used as a ploy for political gain,” Wade said. “On the other end, it’s a national story. It goes back to that for me. I want eyes on this city.”