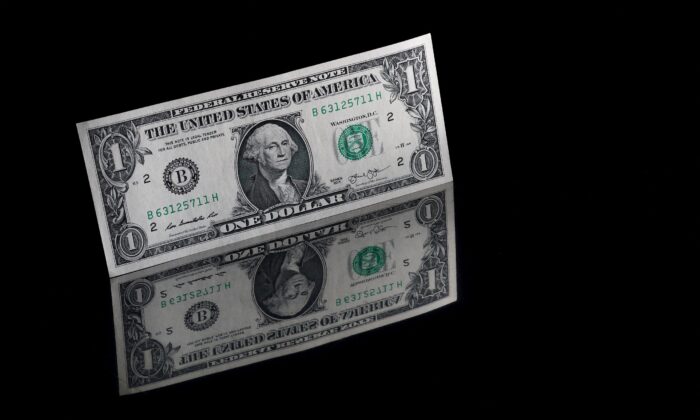 A U.S. one dollar banknote is seen in this illustration taken on Nov. 23, 2021. (Murad Sezer/Illustration/Reuters)
Markets

LONDON—The dollar retreated slightly on Friday but was still on course to gain over the week before the release of U.S. labor data that investors think could reinforce the case for early Federal Reserve interest rate hikes.

The euro rose 0.13 percent to $1.1315 in morning trading in Europe but was down about 0.5 percent for the week against the greenback.

At 0912 GMT, the dollar index which measures the greenback against major peers, was down 0.14 percent at 96.126 and set for weekly gains of about 0.5 percent.

The yen has been the most prominent casualty of the dollar’s strength in the first trading week of the year, as investors reckon the Bank of Japan will lag others on rate hikes.

It is up about 0.6 percent on the yen this week and about 2.7 percent over five weeks. The dollar is also eyeing its best week in more than a month against the Australian and New Zealand dollars.

The release on Federal Reserve meeting minutes on Wednesday supported expectations that the Fed could raise rates as soon as March and several times this year, pushing up U.S. yields and the currency.

“It’s a surprise the dollar hasn’t done better this week on the surge in Treasury yields and the hawkish FOMC minutes,” said Kenneth Broux, an FX strategist at Societe Generale in London.

Elsewhere, sterling has held its own this week as traders figure the Bank of England will soon begin its own hiking path. It last bought $1.3546, not far from Tuesday’s two-month high of $1.3599. It is near a two-year high on the euro.

The big moves in the U.S. bond market have unsettled traders’ sentiment across asset classes. Cryptocurrencies have dropped sharply in thin holiday trade.

Bitcoin hit its lowest since September in Asia trading at $40,939 but recouped some losses and ticked up to $42,445.