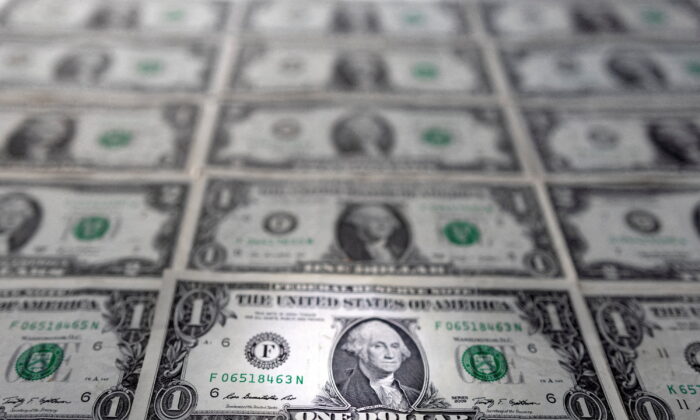 LONDON—The dollar fell on Monday, losing some of the gains it had made from Friday’s U.S. jobs data, as currency markets pulled back on their initial reaction and waited for Wednesday’s inflation data to give more clues about the Federal Reserve’s next steps.

Higher-than-expected U.S. employment figures last week saw the dollar strengthen against major peers because the data was seen by traders as an indication that the Fed could raise interest rates more aggressively to combat inflation.

Traders were pricing in a roughly 69 percent chance of the Fed raising rates by 75 basis points (bps) at its September meeting, according to Refinitiv data.

Fed Governor Michelle Bowman said on Saturday that the U.S. central bank should consider more 75 bps hikes at coming meetings to bring inflation back down.

“The U.S. dollar has been supported by the combination of stronger U.S. economic data releases and hawkish comments from regional Fed presidents that have encouraged market participants to push back expectations for a dovish policy pivot from Fed,” wrote MUFG currency analysts Derek Halpenny and Lee Hardman in a note to clients.

Markets are now waiting for U.S. inflation data on Wednesday. Analysts polled by Reuters expect annual inflation to have eased to 8.7 percent in July from 9.1 percent previously.

High inflation combined with Friday’s labor market reading could push the market to fully price in 75 basis points of Fed hikes for September, according to Tim Graf, head of EMEA macro strategy at State Street.

“If you have both things (jobs growth and inflation) still running very very hot then it becomes very difficult, I think, to back away from another 75 basis point hike,” he said.

As European stock indexes ticked higher, riskier currencies strengthened. The Australian dollar, which is seen as a proxy for risk appetite, recovered following Friday’s losses, up 0.8 percent on the day at $0.6964.

The dollar was flat versus the yen, with the pair changing hands at 134.99.

Eurozone bond yields fell back down after having gained following the jobs data on Friday. Italian bonds appeared to brush off a decision by Moody’s to lower Italy’s ratings outlook.

“If quiet summer markets prompt renewed interest in the carry trade, the euro will probably be one of the preferred funding currencies,” said ING FX analyst Chris Turner in a client note.

Foreign Secretary Liz Truss—who is expected to replace Boris Johnson as prime minister next month— has said she plans to hold a review of the Bank of England’s mandate.