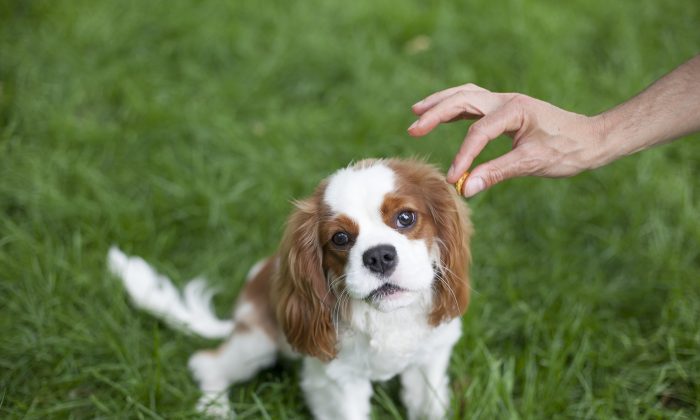 A dog called Ivy, is being fed a treat at Washington Square Park in Manhattan, on June 4, 2014 (Samira Bouaou/Epoch Times)
Health

Dog Treats Made in China Linked to Kidney Failure, Death

Since 2007, when the FDA first noticed a problem, more than 1,000 dogs have died and thousands of cases of illness have been reported. Consumer warnings have gone out over the years, but no recall notices have been issued.

Although the jerky treats are still for sale, PetCo recently announced plans to pull them off shelves at the end of the year. PetSmart will follow suit in March 2015.

“We’ve been following the FDA warnings and related customer concerns closely, and we’ve been actively reducing our China-made assortment and expanding our American-made offerings for several years now,” Petco CEO Jim Myers said in a statement.

But, that doesn’t mean the ingredients are necessarily sourced in the United States.

“Packages that do not state on the label that they are made in another country may still contain ingredients sourced from China or other countries that export to the U.S.,” according to the FDA website.

Veterinarian and clinical pathologist Kendal Harr said this rule is deceiving to the customer. “Chicken jerky from China can be processed with some fillers added and the bag is then stamped ‘Made in USA,’” he said.

Many consumer complaints are made about Nestlé Purina’s Waggin’ Train jerky products.

A product description on its website on May 26, however, listed only two of the three flavors as being sourced “from just one trusted ingredient supplier in the U.S.” The other flavor, Chicken Jerky Tenders, was simply omitted.

A bill of lading on importgenius.com showed that 4,620 cartons of Chicken Jerky Tenders arrived in the United States from China on May 20, 2014. The jerky was shipped by JOC Great Wall Corp.

After Epoch Times pointed to the shipment information, Nestlé Purina’s spokesman revealed further information about the origin of the new treats.

“New Waggin’ Train Chicken Jerky Tenders are made with real white meat chicken in China, where we now source our chicken exclusively from a single, trusted chicken supplier, which is part of a U.S.-based company,” said Schopp via email May 27.

“We introduced new Waggin’ Train treats in February 2014, giving consumers a choice, with chicken jerky dog treats made in China and treats made in the U.S., all of which are quality-tested and safe to feed as directed.”

JOC Great Wall Corp. did not respond to an emailed request for comment before press deadline.

“The Saturday before her death, I had brought a new bag of treats. On Sunday night in the middle of the night she started vomiting and had diarrhea,” she said.

A few days later the little dog was hospitalized. The veterinarian told Pierre that they found high levels of poison in Bella’s blood, but couldn’t pinpoint what the poison was.

“He kept asking me what she could have gotten into,” Pierre said.

One day after Bella was hospitalized, the FDA issued a warning about dog treats from China.

Pierre saw the warning and checked the label of the bag of Waggin’ Train jerky treats she had in the pantry. She was shocked to read “Made in China.”

“When I first started buying them a couple of months earlier ‘Made in China’ was not on the package,” Pierre said. She didn’t think to reread the package the next time she brought them.

“I don’t trust Purina, this very large corporate manufacturer. Their bottom line is profit. All for corporate greed and it’s sad,” Pierre said.

In 2012, Pierre established an activist group called Animal Parents Against Pet Treats and Food Made in China. The group now has close to 10,000 Facebook members.

In April this year, Pierre and two other pet parents, one from Ohio, one from Long Island, met with two representatives from the FDA in Washington, D.C.

“We asked them [the FDA] questions. … They do know something is definitely wrong with the treats but they just can’t figure it out.”

Lab tests carried out by the New York State Department of Agriculture and Markets (NYSDAM) Food Laboratory in Albany late last year found traces of unapproved antibiotics, the antiviral drug amantadine, and pesticides. But the FDA does not believe these contaminants caused the illnesses in dogs.

“The known side effects or adverse events associated with amantadine do not seem to correlate with the symptoms seen in the jerky pet treat-related cases,” wrote Juli Putnam, a spokeswoman for the FDA, in an emailed statement.

The FDA has told Chinese authorities the presence of amantadine in these products is considered an adulterant—which could be grounds for a ban.

Putnam said the FDA was working with regulatory agencies in China about the problem.

The Veterinary Information Network (VIN) coordinated the lab tests that found the contaminants. After the discovery, in January this year a voluntary recall of the products was carried out across New York state.

Clinical pathologist Kendal Harr leads the VIN team that is monitoring jerky treats complications in pets. Vets around the country are entering information in VIN’s database when pets the present the associated symptoms.

Some of the jerky samples had traces of multiple antibiotics.

“It is probably because the chickens were sick,” Harr said. In China, it’s legal to slaughter sick animals and use them for human and animal food, she said—though it’s illegal in the United States.

Pet owners nationwide have posted about 650 complaints on ConsumerAffairs.com about another Nestlé Purina pet food, Beneful.

“My dog became violently ill, throwing up and diarrhea. … I gave Beneful the benefit of the doubt and tried to feed my dog this again after he had been stable for two weeks. He immediately started throwing up again,” she wrote on April 8.

“We bought a bag of Beneful a week ago and now both our dogs are violently ill, vomiting everything they eat,” wrote an owner named Michelle from a few days later.

Tammy, from Texas, wrote on May 19 that she stopped feeding her dogs Beneful six months ago.

“I think one reason they are still alive today is because I discovered the link between their dog food and their numerous tumors, tremors, seizures, and liver problems,” she wrote.

Alarming reviews of the jerky treats and Beneful can also be found on Amazon.com.

But because of lax food labelling laws for pet foods, each ingredient, including the chicken-by-product meal (which often contains some feathers, bones, beaks, and maybe some gizzards), could have been sourced from China.

Around 86 million pounds of pet food came from China in 2011, according to FDA estimates, with pet treats being one of the fastest growing segments of the pet food market.

In March and April 2012, after a flood of complaints from U.S. consumers about dogs and cats getting sick, the FDA sent inspectors to five plants in China.

During the inspections the FDA caught one firm falsifying receiving documents for glycerin, an ingredient used in most jerky pet treats.

According to an NBC report, the Chinese manufacturers did not let the FDA inspectors take product samples from the factories.

“FDA has been in discussions with our regulatory counterparts in China on how best to facilitate the collection of food samples and is still working on this issue,” Putnam told the Epoch Times via email.

Putnam said the FDA has authority to inspect facilities that manufacture jerky treats, but not the farms that supply the chicken.

Between 2003, when China first approached the USDA about poultry exports, and 2011, the pet food exports to the United States from China grew 85-fold, according to the FDA.

Adulteration of Food in China

In February 2008, two Chinese nationals and the businesses they operated, along with a U.S. company and its president and chief executive officer, were indicted by a federal grand jury for their roles in the adulteration of dog, cat, and fish foods.

The FDA found Chinese-made pet food contained melamine, which is normally used in the production of plastic. The chemical and cyanuric acid were added to wheat gluten and rice protein concentrate, to increase the perceived protein content in laboratory tests.

The adulteration resulted in a massive pet food recall in the United States, but not before thousands of dogs and cats had fallen ill. Reported pet deaths ranged from 100 to more than 3,600, depending on the source.

Chinese food manufacturers started adulterating food with melamine as early as 2006, according to Chinese language media, despite its toxic health effects.

Also in 2008, thousands of infants across China were hospitalized after drinking infant formula adulterated with melamine. At least six babies died and 290,000 suffered kidney damage.

China’s state-run media initially did not broadcast the news. Several months after the scandal was reported internationally, state-run media reported that 22 firms, including the state-owned Sanlu dairy company, were facing charges in relation to the infant-poisoning scandal.