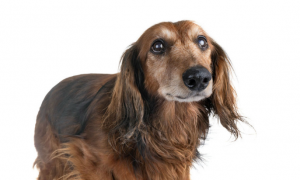 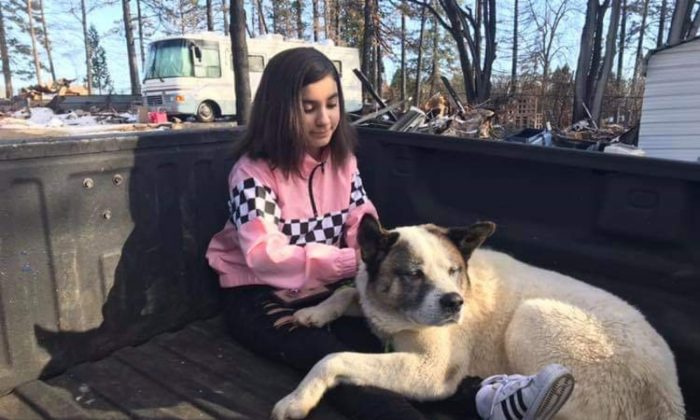 Maleah Ballejos reunited with her dog Kingston in Paradise, Calif., on Feb. 18, 2019. (Ben Lepe/AP)
US News

PARADISE, California—A dog named Kingston is back with his family 101 days after he jumped out of their truck as they fled a devastating Northern California wildfire.

101 DAYS ALONE: Kingston ran away as his family evacuated their Paradise home, scared by the chaos of the Camp Fire. 3 months later he was finally reunited with his family, who believe the 12-year-old dog survived on his own by eating skunks.

“When I found out, it just about brought me to tears,” said Gabriel Ballejos, Kingston’s owner. “I’m so proud of him. I can’t believe it. He’s a true survivor, and it’s a testament to the American spirit.”

“Every night I would ask my dad and tell him that we needed to go look for him,” said Ballejos’ daughter, Maleah.

The family got a call after animal rescue volunteer Ben Lepe trapped Kingston on Sunday and took him to Friends of Camp Fire Cats, a local rescue group. The volunteers saw a missing dog message on Facebook and contacted the family.

Lepe said the large dog had been spotted on surveillance cameras and that he set up a trap big enough for it on Saturday.

“When I went to check it on Sunday, there he was,” Lepe said. “It was awesome to see him and know he would be fed and warm.”

Family members believe Kingston survived by eating skunks, because he hunted them before the fire and smelled of skunk when they picked him up.

This is what it’s all about! ❤️

The Ballejos family has their beloved dog named Kingston back, 101 days after the #CampFire

He was found, trapped and given a bath by a group of volunteers and today, he was reunited with his family. #LateNewsTonight at 11 @ABC10 @dog_rates pic.twitter.com/uP9QNNDY6U

The town of Paradise was leveled by a Nov. 8 blaze that killed 85 people and destroyed nearly 15,000 homes in the area.

Angel Herrera, of Friends of Camp Fire Cats, said the group has rescued more than 200 lost pets since the fire and still sets traps.

“If we had the resources, we could trap 50 animals every single night,” she said.

Meet Ben Lepe! He's the man who trapped Kingston 101 days after the #CampFire in #Paradise. He took Kingston to Friends of Camp Fire Cats- Basecamp where he was later reunited with his family! Ben has been trapping dogs/cats for awhile now. His sweet Yorkie named Colby has been missing for two years. He is keeping his hope alive by helping others. #LateNewsTonight at 11

On Dec. 11, 2018, a California woman was reuniting with her dog, one month after the devastating Camp Fire destroyed her home.

The dog, Madison, was found guarding her fire-ravaged property and was apparently waiting for her to come back.

Andrea Gaylord told ABC10: “You could never ask for a better animal. You really couldn’t.”

“Imagine the loyalty of hanging in through the worst of circumstances and being here waiting,” she said.

Madison’s parents were unable to get home to him when the Camp Fire spread. They hoped and prayed he would be OK. When…

Local animal rescue volunteer Shayla Sullivan eventually found Miguel, her other dog, in Citrus Heights, about 85 miles away from Paradise, where her home was located, ABC10 reported.

According to the HuffPost, Madison’s whereabouts remained a mystery. Gaylord believed the animal was still alive.

Since then, the dog’s owner released a video showing the moment Madison and its brother reunited for the first time.

Here’s a sweet video for you! Madison, the dog who waited for his owners at their burned home, was reunited with his brother Miguel today! ❤️❤️❤️ #CampFire #Paradise

“The third day I went in there, I didn’t know if my mind was playing tricks on me, but I felt like I saw a flash of white movement down in the canyon,” Sullivan said when she approached Gaylord’s property.

When Gaylord drove up to the property, it took “about five or 10 minutes” for Madison to come and greet its owner. “When Andrea showed up, he smelled her,” Sullivan said.

Miguel, the other dog, meanwhile, had been “so upset and so depressed” being without his brother, she said. “It was surreal to see them go back into, like, ‘We’re a team now, everything is OK, we got our people, we can go back to work,’” she said.

Gaylord said the dogs are staying on the property, as her family is making regular trips to make sure the animals get the proper care. Sullivan said the animals are working dogs and need a lot of space. Gaylord is temporarily in a mobile home park, HuffPost reported.

“Their instinctual job is to watch the flocks and we’re part of them,” Gaylord added of the guard dogs. “It’s a comforting feeling.”

“Shayla has been so helpful, you know, taking care of the dogs,” Gaylord added ABC10. “I have 141 phone calls on my cell phone from this gal, helping us find our dogs.”

Marlene Johnson, the founder the Facebook group Livestock Guardian Dogs, told HuffPost: “Anatolian shepherd dogs are from Turkey and have been bred for thousands of years to protect and guard livestock, their property, and their humans,” Johnson said.

“Livestock guardian dogs like Anatolian shepherds are working dogs that are appreciated for their loyalty, their intelligence, and their independent nature and Madison is a perfect example of a livestock guardian dog. He braved a natural disaster and went right back to where he belonged and stayed there until his owners and working buddy returned,” she added.