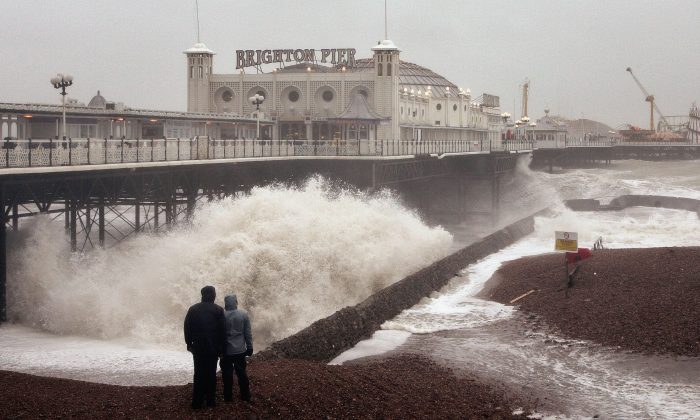 Brighton Pier in England where the woman rescued her dog on Dec. 10, 2017. (Peter Macdiarmid/Getty Images)
UK

A woman has risked her life to save her dog from drowning, running into freezing waters on the British coast.

Video of the woman has been released by a local photographer who happened to be on Brighton beach on Sunday, Dec. 10.

Waves almost dragged the dog out to sea as the woman struggled to rescue it, with another onlooker finally stepping in to pull it to shore.

The woman – who has yet to be named – remained in the sea for a few moments before walking to join her dog on the beach.

Her actions have been criticized by both the Royal National Lifeguard Institute and the coastguard, which both said she was lucky not to have been killed in the 44-degree Fahrenheit water.

Jade Cohen of Brighton RNLI told MailOnline: “People can be tempted to go into the sea because they view their animal as part of the family.

“But in most of the experiences we see normally the dog finds it’s own way out, especially in this case the dog managed to get further up the beach than its owner.

“Obviously this woman has a love for her dog but it was a cold winter’s day and the waves were very high and it would have been better if she had called the coastguard rather than risk her own life.”

Photographer Alessandro Intini who captured the footage said: “She was very confident going into the water, but after the first wave she was in shock, I think she was very lucky to come out alive.”

Watch the woman rescue her dog: