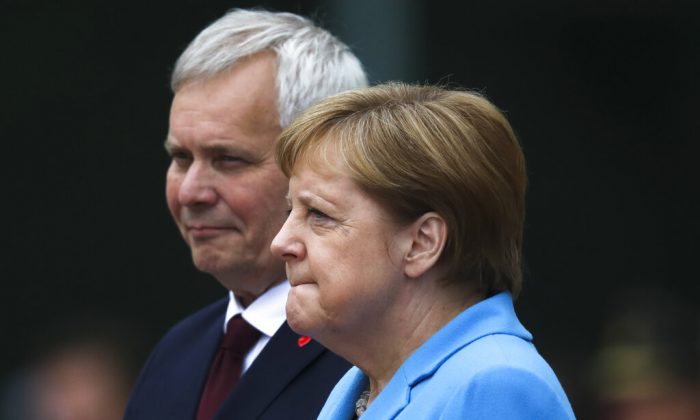 German Chancellor Angela Merkel and Prime Minister of Finland Antti Rinne listen to the national anthems during the welcoming ceremony at the chancellery in Berlin, Germany, on July 10, 2019. (Markus Schreiber/AP Photo)
Health News

Doctor Weighs In on Possible Cause of Merkel’s Shaking

Germany’s Angela Merkel has been seen trembling for a third time in public over the past month, leading to further concerns about the 64-year-old Chancellor’s health.

In the latest incident, video footage shows Merkel trembling as she stood next to Finnish Prime Minister Antti Rinne in Berlin on July 10. As the National Anthem was playing, Merkel began to shake uncontrollably despite her efforts of clutching arms together to remain still. The trembling continued for over one and a half minutes until she started walking.

Afterwards, Merkel said she was “fine.” and that “just as it happened one day, so it will disappear.” She also said that people need not worry about her.

“I am working through some things since the military honors with President Zelensky which do not seem to be over yet, but there is progress and I have to live with it for a while,” Merkel said.

The first time Merkel was spotted shaking was at a June 18 ceremony as she welcomed Ukrainian President Volodymyr Zelensky to Germany during hot weather. Merkel later attributed it to the heat, saying that she was dehydrated and had felt fine after having some water.

But just about a week later, at an event with German President Frank-Walter Steinmeier, Merkel was again seen shaking. A government official told Reuters at the time that that was more of a psychological issue as she tried desperately to avoid a repeat.

Despite Merkel’s attempts to downplay the episode, the repeated shaking has raised questions in the international community over whether the Chancellor’s health would become a constraint on her capability of fulfilling her job.

Merkel has been in office since 2005 and has no history of serious health issues. Her office has yet to provide an explanation for the cause of her shaking, leading to a variety of speculation in German media.

Jingduan Yang, a professor at the University of Arizona focusing on integrative medicine who is also the founder of Yang Institute of Integrative Medicine, told The Epoch Times in an interview that one possible cause could be myoclonic epilepsy.

For young people who contract the disorder, the cause is usually genetic and patients can grow out of it or control it with medication, but for people who acquire it at a later stage of life, other organic causes might be at play, according to Yang.

Yang said that there could be five major categories that led to the symptom: structural issues such as brain tumor or malformation of cerebral blood vessel; infection from virus, parasites or bacteria; cerebral vascular issues blocking blood circulation; serious nutritional deficits such as lack of amino acids, vitamins, and minerals; or an auto-immune disease whereby the antibodies attack part of the brain.

From the perspective of Chinese medicine, Yang said that the cause could also be an energetic one, meaning a part of the brain is “overly active”: having a “short, brief, excessive energetic discharge,” a remedy for which could be herbal treatments.

“Chinese medicine is an energetic medicine, we basically describe how [different] energies balance each other,” Yang said.

Yang explained that Chinese medicine sees energy in terms of yin and yang, with the former characterized by motion and the latter by stillness.

“When somebody has a seizure or tremor … that means excessive moving energy, or yang energy,” Yang said. “The yin energy [in this case] is relatively deficient, not enough to balance the yang energy.”

Yang also noted the importance of sufficient sleep in maintaining the yin-yang balance.

“From 11 o’clock in the evening to 3 o’clock in the morning, those four hours of sleep is when the liver gallbladder gets rejuvenated, get restored, so that it can function better the next day,” Yang said, adding that not allowing the body to rest during these hours could “seriously compromise the function of internal organs.”

In the past, Merkel had joked that she is a “sleep camel” who can go days with little sleep, and make it up by sleeping in long hours over the weekend. She is due to go on holiday later in the summer.

Yang said that Merkel’s previous claims of dehydration and psychological stress are not sufficient to explain what had happened. He said that environmental factors such as dehydration and stress can trigger seizures, but those are “more likely the precipitating factors and not the primary cause of the problem.”

“Most likely it had happened in other settings, her reaction was very calm, she was ready to minimize what it means to her health.”

Merkel said in October last year that she was not seeking reelection after completing her fourth term in 2021.