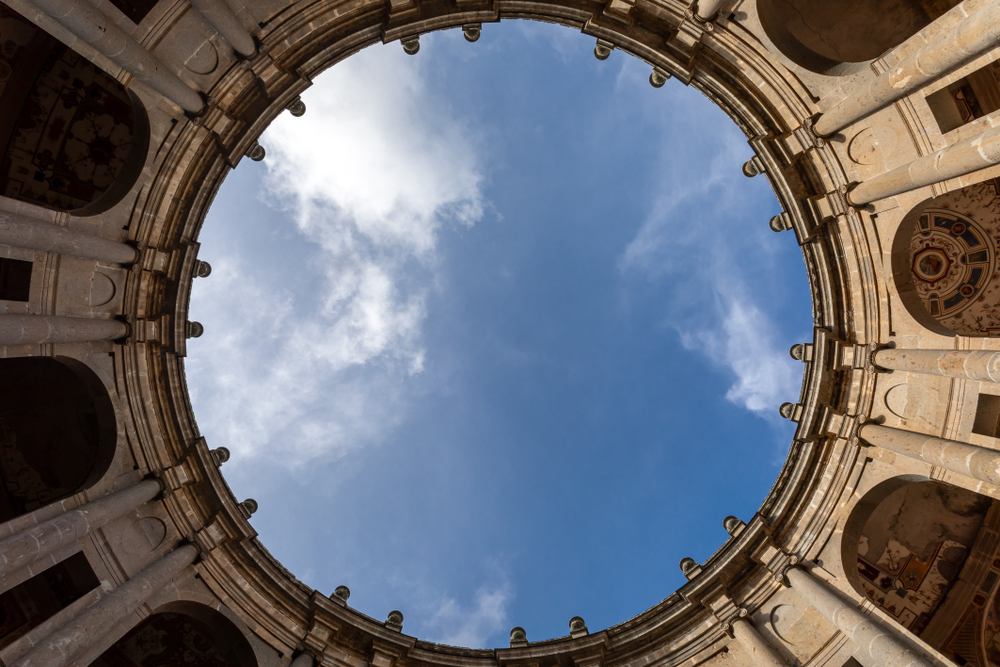 The diameter of the courtyard is 21 feet, the same as its height, creating harmonious proportions that can be sensed when in the space. The circular opening above, in ancient times called an oculus, frames a view to the heavens. (Claudio Bottoni/Shutterstock)
Health

Doctor on Verge of Death Fell in Coma, ‘Saw Heaven’ and Recovered in 2 Months

Is there really a heaven? Do people have souls? Dr. Eben Alexander, a former associate professor of neurosurgery at Harvard Medical School, answered these questions with his own experience.

Dr. Alexander has been a researcher in neurosurgery for 25 years and is known worldwide for his development of modern neurosurgical techniques and treatment of complex brain diseases. During his 15 years at Harvard Medical School, he published over 150 neurosurgical articles, both individually and collaboratively.

In 2008, without warning, Dr. Alexander developed an extremely rare form of bacterial meningitis that was hardly documented in the medical literature. He fell into a coma within a few hours. Dr. Alexander, a former lifelong believer in science, said that he saw heaven while in the coma and realized that these phenomena, which he had previously considered nonsense, were in fact no fantasy. He wrote a book about his experiences titled Proof of Heaven, which was a New York Times bestseller for 15 weeks.

The following are some highlights from Health 1+1’s interview with Dr. Alexander.

The Sight of Heaven?

In November 2008, I suddenly developed a severe case of bacterial meningitis and was admitted to the hospital’s intensive care unit (ICU). It was an extremely rare form of meningitis that was barely documented in the medical literature.

Within a few hours, I fell into a deep coma.

In my coma, I found myself rescued by a slowly spinning white light with a perfect musical melody. The white light was surrounded by golden and silvery hair-like things. Then, a gorgeous and very real entrance valley slowly opened. At that time, my consciousness was only the size of a speck of light, on the wings of a butterfly. There were several million butterflies flying around me.

There was a lush green and vibrant meadow below. There was no sign of death or decline. There were thousands of lives dancing there, and I call them “souls among lives.” The place was filled with joy, with angels singing from high above and pure “soul pearls” being pulled out of the lights and reflecting against the deep blue sky, and there were songs coming from all around.

A thunderbolt passed through my consciousness, which was the first thing I knew in this dimension.

I had no memory of this world at that time, and I had forgotten the language. I had no recollection of Eben Alexander’s life or my knowledge of the universe; and my memory was empty.

Fortunately, I was not alone. Our consciousness was all on the wings of a butterfly. A very beautiful lady was beside me, and her clothes were the same as the attires of the joyful dancing beings in the valley. She and I had a deep connection, as she was my guardian angel. Throughout my journey, she was the one who telepathically sent me all the comforting messages: “You will always be loved and cherished. You don’t need to be afraid. You will be well taken care of.”

There are no words to describe how beautiful it was, and I think that was the message I wanted to bring back to this world.

When I woke up in the ICU after that near-death experience, for a moment, I couldn’t recognize my family members, who were at my bedside, including my mother, wife, and son. All I knew was that I had been on a strange and mysterious journey.

If you saw my condition, you would think that I was hopeless. However, I miraculously recovered two months later.

Almost all the doctors said that I survived because of the near-death experience I had. Nevertheless, I don’t think I just “survived,” but I recovered completely and became more energetic.

In the hours following the near-death experience, my language returned; and within a few days, my childhood memories came back. My knowledge of the language, neurology, the brain, the universe and physics was all restored within two months of waking up from the coma.

I documented the neocortical damage to my brain to prove that what I saw was not a dream, hallucination, or fiction. In fact, there is clear medical evidence that my neocortex was in a state of damage.

In addition, CT and MRI brain tests showed that all eight lobes of my brain were affected, so my own cerebral cortex would not have been able to generate this experience.

I think it is important to point out that the conventional science based on Newton and materialism, which is promoted by the mainstream media today, should have been disproved 80 years ago, when quantum physics was born. Yet many in the scientific community have not yet emerged from their confusion.

I spent the first 54 years of my life in the worldview of conventional science. I taught neurosurgery at Harvard Medical School for over 15 years, and I thought I knew a thing or two about the brain, thoughts, and consciousness. However, after my near-death experience in 2008 and nearly 12 years of scientific research, I have gained a much deeper understanding of how science understands the brain, mind, consciousness, and reality.

The idea of free consciousness is much more convincing than the outdated materialism ideology. I did not believe it before the coma, and this experience has brought about a refreshing change in my understanding of humanity and the universe.

The Human Consciousness Has the Power to Heal Illness

We mistakenly believe that consciousness is generated by the material brain, as I did before I fell into a coma, but this is not true.

The new theory in science is the “filtering theory.”

That is, the brain is like a physical processing plant. Our will is free even when it is not in the brain, and it possesses great power to influence the physical world. The placebo effect, for example, is the miraculous healing effect that occurs when the patient is simply comforted in the mind.

The book “Spontaneous Remission: An Annotated Bibliography” documented over 3,500 unexplained cases of self-recovery from cancer, and infectious, congenital, and degenerative diseases in the mid-1990s. The reason was often that the patient’s own faith had an unexpected healing effect.

We can also look to other near-death experiences for reference. For instance, Anita Moorjani recovered from being on the verge of death from cancer, and skeletal surgeon Mary C Neal miraculously recovered 30 minutes after drowning. These separate cases of spiritual healing are all amazing examples. And the placebo effect is similar to the effect of praying, which is a very powerful healing method.

If our consciousness can influence our bodies and healing effects, we can probably influence what happens in real life as well.

My story is so powerful that hundreds of doctors, nurses, and health care workers, especially those who work with the deceased, have realized that when the material body dies, the consciousness does not die with it. They have seen so much evidence.

If you look at our modern understanding of consciousness, the subject of near death [experiences], and other things beyond the physical brain, you will find vivid examples everywhere in life.

In fact, “near death experience” is not a modern term. It existed as early as in the time of Plato, who recorded the life review of Er, son of Armenios of Pamphylia, who almost perished in battle.

When Er revived, he told the other soldiers, “When you die, you will see all the important things in your life flashing in front of your eyes. The most important thing I learned from retrospect is that we exist to love each other.”

After exploring this, we believe that the power of the divine is absolutely real. From a scientific and philosophical point of view, materialism was already outdated 80 years ago.

However, I am not exploring religious beliefs. From 2002 until my coma, my soul was lost for many years. I gave up my faith in God, I gave up praying, I stopped taking my sons to church, and I stopped praying for them at night. However, my near death experience proved to me forever and without question that the power of God’s mercy is absolutely real in this universe.

The Largest Transformation Due to Near Death Experience

Similar experiences from many other people have also proven this: the most important thing we learn from near death experiences is that “do unto others as you would have them do unto you,” a truth that is built into the very foundation of the universe.

If we cause suffering to others without reason, we will pay the price in our passing. When passing through a dimension with life reviews, like the valley I passed through, we experience the same pain as the persons we hurt. So for some people who have hurt others, their life review experience will be hellish.

In the midst of all the light and compassion, the pain and suffering is particularly visible. There are also a series of corrections to help us repay, so that in the next life we are kinder and more loving—that’s the ultimate destination of consciousness through this process.

I’m not the only one. Over 90 percent to 95 percent of people who experienced near-death experiences woke up more compassionate, less materialistic, and more focused on helping others, showing kindness and affection.

I came back from my journey with the realization that one of our greatest challenges is how to love ourselves—to enrich our understanding of God’s compassionate providence, which is what we really need to do.

The most profoundly difficult part of this experience is not what happens after we die, but how we live this life soberly and meaningfully. We need to recognize that our souls are connected to God and to the lives of the universe, and to use that to guide our lives.

I also believe that the source of life is not evolutionary, as Darwin believed. Even so, this misinterpretation has permeated our economic, political, and social systems, and has evolved into the so-called “survival of the fittest,” “every man for himself,” and “elimination of those who compete with you.” This is not right. Modern biology has found many examples to prove the existence of intraspecies and interspecies cooperation and communication, such as dolphins helping whales deliver, and different species helping each other.

When we are born into this world in a physical body, we seem to be abandoned by the spiritual world. Nevertheless, what people forget is that we are not really abandoned, we just need to rediscover the connections. In particular, we need to experience our world fully so that we can live it more meaningfully.