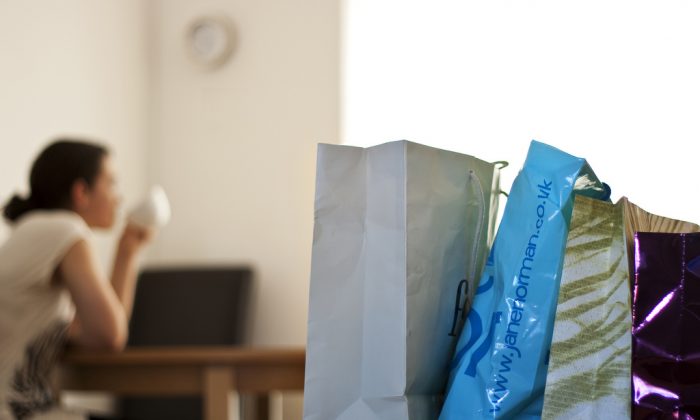 Do You Have a Shopping Addiction?

It’s a typical image we’ve all seen in popular media: watch films like “Clueless” or “Confessions of a Shopping Addict” or TV shows like “Gossip Girl” and you’ll inevitably see pretty young women with their arms loaded full of shopping bags. Go to discount stores like Target or Walmart and you’ll see T-shirts emblazoned with slogans like: Born to Shop or Shopaholic–even for kids! But it’s not that cute when you learn that Shopping Addiction is actually a ‘thing’.

That’s right, now it’s official: overconsumption is an actual disease. Shopping Addiction as an illness (as opposed to a slogan) was first recognised in the boom years of the 1980’s when ‘greed was good’ and Wall Street was full of wolves, but even the ancient Greeks had a word for ‘the madness of overconsumption’ (onlomania, for you nerds out there). It’s an illness that more of us have than you’d think.

A full 40 percent of us recognize that we sometimes buy more than we need to or can afford, and in Spain alone (where ‘shopping as an activity’ isn’t as prevalent as it is in North America), the average person will spend €750 ($806) a year on items they will never even use. This is bad enough, but real shopping addicts go further, regularly purchasing more than they need or can pay for, sometimes going to extremes—extending credit, borrowing money, or even committing fraud—to do so. Their purchases make them feel better for awhile–it offer some ‘retail therapy’ as it were, hiding feelings of insecurity and dissatisfaction and giving the buyer a rush. But then it wears off, and has to be repeated, leaving the victim dissatisfied and depressed over behaviour they can’t seem to control.

According to one study by the Hospital Universitario de Bellvitage in Barcelona, between 6-7 percent of the Western population suffers from a true shopping addiction—possibly more. It’s not surprising, given the pressures we are under to consume.

Countless times every day, media including magazines, internet ads, billboards, and television bombard us with new products that promise to somehow make us better people and make our lives more fulfilling. Online shopping has made over-consuming easier than ever before—a simple click of the mouse means that you don’t even need to leave the house to spend hundreds, if not thousands—online in just a few minutes.

But the promises for a shiny new future through consumption are truly empty: after shopping, 35 percent of women surveyed said they felt ‘tricked’ by the fashion industry into making purchases, while 40 percent of Europeans complained they felt pressured to buy into useless trends. Approximately the same percentage of people stated that they felt fashion trends were promoted so much in society that following them (or not) could directly affect many of their close personal relationships.

For shopping addicts, the effects are even more intense. Yet they still keep consuming. Why? The Confederation of Consumers and Users in Spain (CECU) has established five key reasons people engage in over-consumption:

In a culture that condones and even encourages materialism, many people believe, subconsciously or not, that buying the right car, the latest electronic gadget, or an item of clothing is the key to attaining happiness and success. They may make purchases in anticipation of greater social acceptance, or to boost their self-image, self-esteem, or sense of self-worth. Shopping purely for immediate personal gratification has been glorified and deemed “retail therapy,” and overspending is fairly easy to do in a world that provides easy access to credit. Although compulsive spending may have its roots in these cultural influences, the behavior is typically linked to more complex issues.

Compulsive buying is often used as an emotion-regulation strategy so that a person can avoid or alleviate negative feelings and enhance or prolong positive emotions, at least temporarily. The cycle of compulsive spending moves from apprehension or anxiety to a temporary feeling of pure elation during the search for and acquisition of an item, but then the cycle typically ends in feelings of guilt, shame and remorse.

Could You Be a Shopping Addict? Here Are the Signs:

Our consumer society tends to minimize or even glamourize this illness, making shopping addiction seem like a benign ‘feminine’ trait (whilst economizing is ‘masculine’) or even cute (as in those T-shirts for little girls with ‘shopping addict’ emblazoned on the front). But the truth is, shopping addiction is a serious affliction that rips relationships apart, contributes to environmental destruction, and ruins lives.

Think you may need help? Click here or here.

This article was originally published on www.eluxemagazine.com. Read the original here.

*Image of “shopping bags” via Rob/Flickr