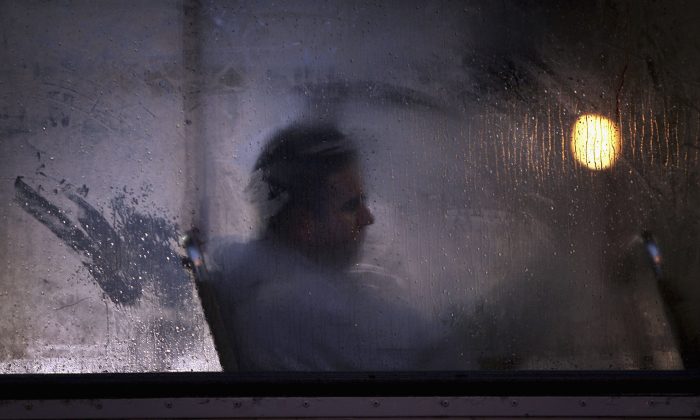 A man makes his way home from work on a bus as darkness falls in Glasgow, Scotland, on Oct. 10, 2005. Seasonal affective disorder (SAD), or winter depression, is a mood disorder related to the change in the seasons and the resulting reduction of exposure to daylight. (Christopher Furlong/Getty Images)
Health News

From the debut of Prozac in 1988, 10 years before direct-to-consumer (DTC) drug advertising, one of the top-performing drug categories in the United States was depression drugs. Because depression has no drug or lab test and pop culture has convinced many that life should be one big “buzz” of extreme happiness, “depression” sailed Pharma through the 1990s and 2000s—even sometimes when people really didn’t probably have it. Certainly, if you had money, job, and career problems, family and relationship problems, or many kinds of health problems, you could be “unhappy” but not necessarily “depressed.”

Whereas drugs like Valium and Librium were once prescribed for “anxiety,” anxiety was redefined as “really” depression during the blockbuster antidepressant years and was treated with the new drug class. In fact, 10 years after DTC advertising began, the number of Americans on antidepressants had doubled to 27 million, or 10 percent of the population! Nor was it probably a marketing coincidence that unlike anxiety drugs, antidepressants were not taken as needed but taken every day, for years. Ka-ching.

Ten years after direct-to-consumer drug advertising began, the number of Americans on antidepressants had doubled to 27 million, or 10 percent of the population!

During the same time period that antidepressant use grew, the number of doctor visits where individuals were prescribed antidepressants even though they had no psychiatric diagnoses increased from 59.5 percent to 72.7 and accounted for four out of five antidepressant prescriptions according to published sources. A growing number of people were also prescribed antipsychotics—though they were not diagnosed as psychotic—and the number of people undergoing psychotherapy shrank. Both insurers and patients preferred pills to psychotherapy because they were quicker and easier and sometimes even “fun.” What was to not like about popping a pill?

Whereas depression had been considered self-limiting (it would go away after a while), depression was now sometimes cast as a lifelong condition requiring lifelong drugs. Worse, drug companies now said the condition was “progressive”—it would get worse if you did not treat it. The claim added new urgency to the “sell” but evidence was weak to nonexistent.

Once the big money makers like Prozac, Paxil, and Zoloft went off patent, though, they did not always seem the miracle drugs they had been cast. Some, notably Paxil, were linked to higher suicide rates—especially in adolescents and young adults. The new antidepressants were sometimes reported to quit working after a honeymoon period, sometimes called “Prozac poop-out.” (“Prozac wears off within a year for about one-third of those who take it,” said Harvard magazine.) And a 2010 article in the Journal of the American Medical Association (JAMA) suggested that the pills were not even effective in milder forms of depression. Their popularity could have been the “placebo” effect.

Once the big money makers like Prozac, Paxil, and Zoloft went off patent, though, they did not always seem the miracle drugs they had been cast.

Human nature might have been a contributor to poop-out, too, said psychiatrist Phillip Sinaikin. “An antidepressant not working anymore is no different from getting used to anything that used to thrill us,” said Sinaikin in an interview about his book “Psychiatryland.” “We buy our dream house with two bedrooms and a garage, and after a while it doesn’t make us happy anymore, and we are eyeing the house with three bedrooms and a pool. Another example, of course, is falling in and out of love.”

An antidepressant not working anymore is no different from getting used to anything that used to thrill us.
— Dr. Phillip Sinaikin, author of 'Psychiatryland'

When the bloom began falling off antidepressant sales, drug companies began to market “add-on” drugs to boost the original drug that seemed to have stopped working. The add-on drug could cost several hundred dollars a month, but no one seemed to mind since people were not paying for the drugs out of their pockets. (No one seemed to consider the effect on insurance premiums and taxes.)

Still, the U.S. antidepressant market finally peaked in 2008 and has been declining by 4 percent every year since according to industry sources. While certainly depression exists—as does bipolar disorder, ADHD, and other mood and behavior conditions—it is likely that it was over-diagnosed and over-treated when the expensive pills were covered by patents. It was also over-screened—there were even quizzes to find out if you “were depressed.” (Who would not know if they were depressed?) Once the aggressive marketing stopped, some sufferers clearly got “better.”