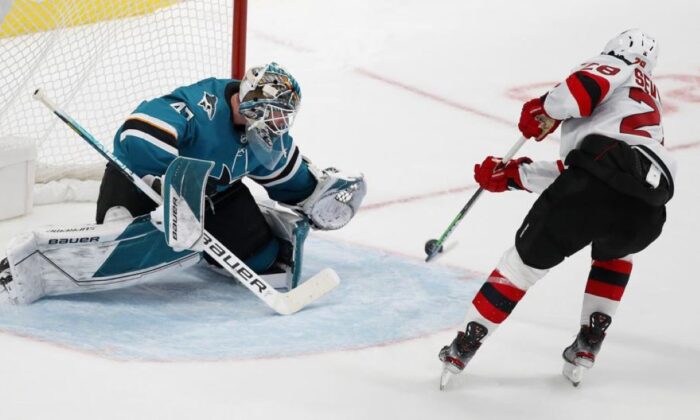 SAN JOSE, Calif.—Damon Severson scored in the third round of a shootout and the New Jersey Devils snapped a three-game skid with a 3–2 victory over the San Jose Sharks on Saturday night.

Janne Kuokkanen scored for New Jersey with 2:56 left in the third period to force overtime.

Ryan Graves also scored and goalie Jonathan Bernier turned back 25 shots for the Devils, who went to overtime on the road for the second straight day.

Jonathan Dahlen and Rudolfs Balcers had the goals for San Jose, which was seeking its third straight win but blew a pair of leads.

“Watching (Severson) in practice, we saw a lot of times where he dominated our goalie, so we decided next time we have a shootout … we’d use him,” Devils coach Lindy Ruff said.

“It was a perfect scenario.”

Severson was less than perfect in Friday’s 3–2 overtime loss to the Los Angeles Kings, and Ruff addressed his concerns about some critical mistakes in a conversation between the two earlier in the day.

“It’s a great feeling as a player, especially when you get that vote of confidence from your coach. I think (Ruff) made you guys aware we had a good conversation this morning,” Severson said.

“It’s not one of those things that happened last game that you’re just going to let slide … and then when you get to finish a game like that and put an icing on the cake to our road trip, that’s a huge goal and a great feeling.”

Balcers put San Jose ahead at 4:48 of the second period with his second goal this season and fourth point in three games.

Mario Ferraro took the puck deep into Devils territory and kicked it out to an open Balcers, who slipped his shot past Bernier.

Graves tied it late in the second with his first goal of the season when he scored off Nico Hischier’s pass at 16:45. Michael McLeod was also credited with an assist.

The Sharks took a 2–1 lead at 4:21 of the third when Dahlen scored on a power play. He fired a shot from the top of the circle through traffic that found the top corner of the net.

The goal came after Kuokkanen was called for high-sticking.

“It could have gone either way. … I thought (Reimer) played a huge game, made some big saves for us. Sometimes it just doesn’t go your way, but I thought there was a lot of upside.”

Nick Merkley also had an assist to push his point streak to three games.

“I thought we had a great homestand with all the guys out due to COVID. I thought there were far more positives than negatives,” Ferraro said. “Can’t let losses like this bring us down.”

“It’s always disappointing to lose, but I’m quite happy with the effort and the commitment the guys showed,” acting coach John MacLean said.

Sharks: At the Calgary Flames on Tuesday night.