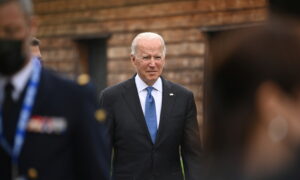 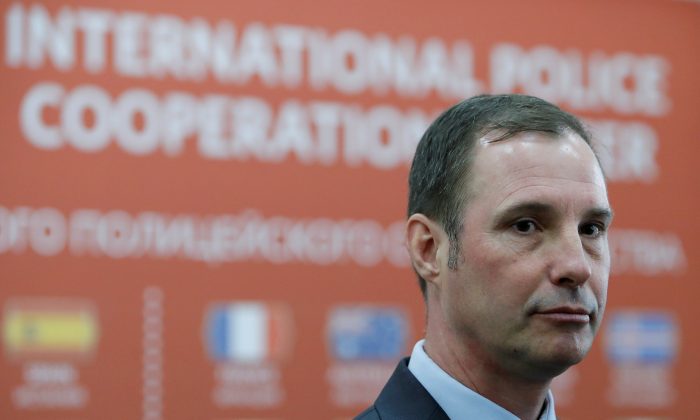 Joseph Stokoe, crime and operations specialist of London's Metropolitan Police, takes part in the opening of the International Police Cooperation Centre ahead of the 2018 FIFA World Cup in Domodedovo near Moscow, Russia, June 12, 2018. (Reuters/Sergei Karpukhin)
Europe

Despite Tensions With Russia, World Cup Countries Pitch in for Tournament Safety

DOMODEDOVO, Russia—As World Cup squads and their fans fly into Russia for the start of the tournament on Thursday, so do police officers from all the competing nations to help deter hooliganism and the threat of any militant attack.

The country has deployed thousands of police to the 11 host cities to deal with an influx of potentially rowdy soccer fans and other security threats.

But they will not be alone. Regardless of any political differences with Moscow, the 32 participating countries have sent officers to help Russian police spot troublemakers and prevent fans from having run-ins with the local authorities.

Housed in an Interior Ministry training facility outside Moscow, the police cooperation center bringing them all together was inaugurated on Tuesday and hailed by its head, Colonel Roman Azyavin, as “a single family of international police forces.”

Some of the countries competing in the World Cup have poor relations with Russia, strained by sanctions and issues ranging from the poisoning of a Russian ex-spy in Britain to the conflict in Syria.

But there is no place for grievances in the mission.

We take politics out of policing. We are here to ensure a safe and secure World Cup.
— Joseph Stokoe, London Metropolitan Police

“We take politics out of policing,” Chief Inspector Joseph Stokoe of London’s Metropolitan Police. “We are here to ensure a safe and secure World Cup.”

Russian authorities, hoping to expunge memories of the brawls involving the country’s fans in Marseille at the 2016 European championship, have pledged to curb violence.

England fans were also involved in those clashes, and Stokoe said British police officers were patrolling airports and ensuring that people banned from attending matches were surrendering their passports.

He said other British police officers on the streets would intervene to help stamp out any trouble.

In cities such as Volgograd, where England faces Tunisia next week, exuberant behavior in some places can be deemed insulting by the locals. Formerly known as Stalingrad, Volgograd was the site of the largest and bloodiest battle of World War II, with monuments and former battlefields dotting the cityscape.

“English fans aren’t stupid,” Stokoe said. “They will be aware of the central places and not central places where they can perhaps enjoy themselves in the bars, and not in the streets and the other iconic sites.”

But Stokoe said British officers would be ready to step in if needed.

“If there is a misinterpretation or a misunderstanding, they can quickly get there and explain to them [England fans] that the Russian authorities do not like this,” Stokoe said. “Change your behavior, change your location.”

As well as measures being taken at home and in Russia by the competing nations, Moscow is also screening incoming fans with the help of fan IDs, a mandatory document to attend matches and proving its holder has been approved by Russian authorities.

With the flags of every World Cup country hanging on the walls, the cooperation center serves as a communication hub for the foreign police forces.

Two officers from the competing countries will be based there to interact with those in the field while coordinating security efforts with Russian authorities in the same room.

“It’s a question for Russian police to do the things to defend Polish supporters from Russian hooligans,” Poland’s Captain Wojciech Dobrowolski said. “But if we see Polish hooligans between other supporters, we will tell Russian police and I think they will do their best to stop any fights.”