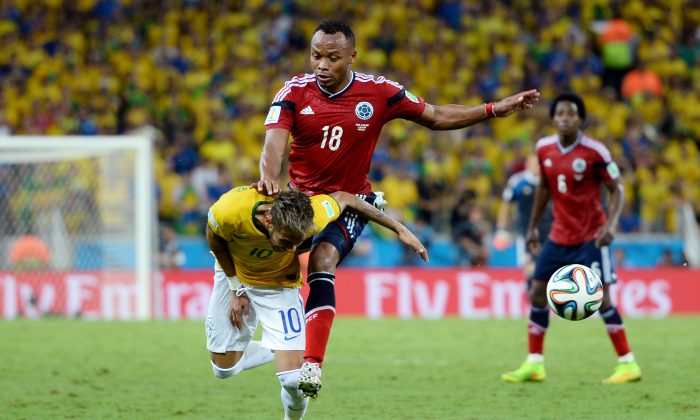 Neymar of Brazil is challenged by Juan Camilo Zuniga of Colombia during the 2014 FIFA World Cup Brazil Quarter Final match between Brazil and Colombia at Castelao on July 4, 2014 in Fortaleza, Brazil. This tackle resulted in injury to Neymar and ended the player's World Cup. (Jamie McDonald/Getty Images)
Soccer

RIO DE JANEIRO—FIFA will not take action against the Colombia player who injured Neymar and ended the Brazil star’s World Cup.

FIFA said its disciplinary panel “cannot consider this matter” under the rules because the match referee saw the challenge by Camilo Zuniga and judged it at the time.

“In this specific case, no retrospective action can be taken,” FIFA said in a statement on Monday, because the incident “did not escape the match officials’ attention.”

In a separate decision, the panel also refused to consider a Confederation of Brazilian Football appeal against captain Thiago Silva’s yellow card in the 2-1 win quarterfinals over Colombia on Friday in Fortaleza.

Thiago Silva’s second caution of the tournament triggered a one-match ban which he will serve in the semifinals. Brazil will therefore be without its best player and its captain against Germany on Tuesday in Belo Horizonte.

Neymar will be sidelined for about 45 days after sustaining a fractured third vertebra.

The panel studied video of Zuniga’s 86th-minute challenge, where he kneed Neymar in the back when jumping into him at speed. Zuniga apologized on Saturday.

Spanish referee Carlos Velasco Carballo did not show Zuniga a yellow card, and FIFA’s disciplinary panel considered the incident judged on the spot.

The seriousness of an injury could not be weighed in a disciplinary decision, nor was mistaken identity a factor in the case, FIFA added.

“First and foremost, the chairman of the FIFA Disciplinary Committee (Claudio Sulser) wishes to state that he deeply regrets the incident and the serious consequences on Neymar’s health,” the statement said.

However, Suarez’s bite of Italy defender Giorgio Chiellini’s shoulder was missed by match officials. That allowed Sulser to use video evidence to ban the Uruguay forward for nine international matches and four months.

The Mexican referee in that case, Marco Rodriguez, will handle the Brazil-Germany semifinal in his first match duty since Uruguay beat Italy 1-0 on June 24.

Thiago Silva was booked against Colombia for impeding goalkeeper David Ospina who tried to kick the ball downfield.

The FIFA disciplinary code states that cautions can be canceled only in “exceptional circumstances.”

The panel “cannot consider the matter given the fact that there is no legal basis entitling it to grant such request,” FIFA said.