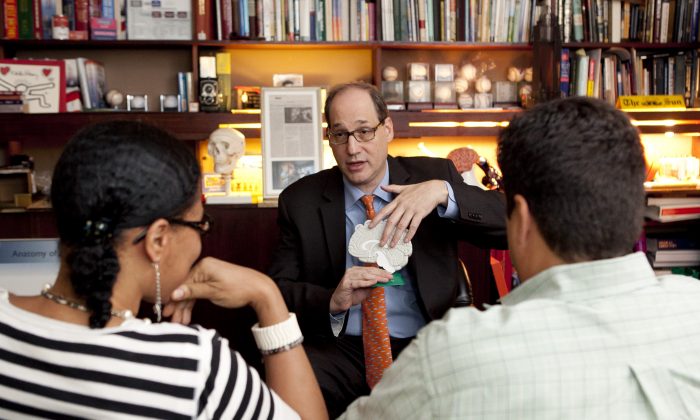 NEW YORK—Though treatments exist, fewer than half of those suffering from depression receive help, according to the World Health Organization.

In the last decade, treatment for depression has come a long way. Short of electroconvulsive therapy, which could lead to memory loss, the only viable options were antidepressants, which come with complicated, systemic side effects. But today, non-drug technologies for treating depression have been improving patient outcomes. A technology that has been making rapid progress is Transcranial Magnetic Stimulation (TMS).

TMS has been in use since the 1980s but not adopted medically for the treatment of depression until 2003 when TMS machines were made available to Canadian doctors. In the United States, TMS didn’t win approval from the FDA until 2008.

That year, Drs. Alan Manevitz and James Halper were maintaining their practice on Sutton Place South, just off the East River. The two doctors had been in practice together for over a decade, combining psychopharmacology with psychotherapy.

They came across TMS through published research and decided to take a deeper look.

“It sounded very exciting,” Dr. Halper said. “It’s not just chemicals in the body that go all over the place. Here was a way to target the parts of the brain we wanted to change while avoiding systemic side effects. Antidepressants had turned out to be less effective than we hoped.”

Depression manifests biochemically as a deficiency in the production of the neurotransmitters dopamine, norepinephrine, and serotonin. Traditional antidepressants work by making the patient’s existing neurotransmitters stay in action longer.

No matter how far the pills can stretch a limited number of neurotransmitters, they don’t address the fundamental shortage in neurotransmitter production, Dr. Manevitz said.

So, in 2008, he and Dr. Halper bought their first TMS machine, which turned out to be the first in New York City and the third in the world.

People experiencing depression exhibit too much activity in the brain’s right hemisphere and too little in the left hemisphere, according to researched published by the National Institutes of Health. TMS delivers powerful magnetic pulses to the brain’s left hemisphere, increasing the amount of neurotransmitters the brain produces.

TMS is a magnet and not radiation, and the most common side effect is fleeting pain or discomfort at the treatment site. Fewer than 1 percent of patients experience a seizure.

Patients are expected to commit to a six-week course of 40-minute sessions over five consecutive days a week. The patient sits in the TMS chair with the magnet placed over the left side of the head. Patients can read or watch television, but cannot fall asleep.

The treatment feels like a woodpecker tapping, said practice coordinator Joanna Robben, but patients typically become desensitized to the sensation after four sessions.

On the first day the doctors offered TMS, patients flocked in from all over the world, particularly from Japan.

Now, almost 500 providers across the country offer TMS for depression, according to Neuronetics, the leading manufacturers of TMS machines.

TMS used to be a last intervention, recommended only after a patient fails to see improvement after trying three or four classes of antidepressants.

“Now people are thinking, why not try it first?” Dr. Manevitz said.

TMS as a Tool

Neuronetics, its manufacturer, says that 1 in 2 patients improved significantly, and 1 in 3 patients were completely free of depression symptoms after six weeks of treatment using NeuroStar.

“All the research shows that therapy and medicine together work better than therapy or medicine alone,” Manevitz said. “So now here was TMS, and we said what if we gave medicine, therapy, and TMS?”

The doctors’ hunch turned out to be correct. In a retrospective study of their first 100 TMS patients, 70 percent entered remission and 90 responded.

A New York-based psychologist (name omitted for privacy) who struggled with depression for over 40 years began TMS with Manevitz this spring.

“As I get older, medications become more toxic to elderly patients,” she said. “The amount changes, side effects become greater. As you get over 65, you might develop tremors and cognitive impairments.”

TMS made her realize for the first time that she hadn’t been feeling well because she didn’t know what feeling well was like, she said.

“I responded to it immediately. I felt well…I slept better, my thinking patterns changed, I felt a sense of joy—I was really happy. It wasn’t a high. It was a very good feeling of well being.”

Another patient, a lawyer based in New York, didn’t feel the results immediately.

“I ended up doing two courses of 40 sessions,” he said.

“It took close to 10 sessions before I started to see subtle benefits. But I kept with it.” This was close to four years ago. Several months ago he experienced a new bout of depression and got a “refresher session” for the first time. “I instantly felt better,” he said.

Of the treatment, he said, “I felt like I was getting flow to a part of my brain that wasn’t getting enough flow.”

TMS is not a silver bullet, this patient said, but one of several tools to be used in treating depression.

The doctors coached him on how to maintain healthy relationships and to change negative thinking patterns as part of a bio-psycho-social approach.

“One thing we noticed was that therapy seemed to flow better after the [TMS] treatment,” Manevitz said. “Somehow the patient was more open.”

Always ready to add cutting-edge technologies into their patients’ treatment options, Manevitz and Halper bought a Brainway TMS just over a month ago. Brainway was approved by the FDA earlier this year. It works on a slightly different mechanism and targets a deeper part of the brain.

“We see psychiatry as a work in progress,” Halper said. “It’s a very exciting field. It’s always evolving. I’m hoping to combine TMS with more neuroimaging to target it more, and see if we can predict patient response with neuroimaging.”