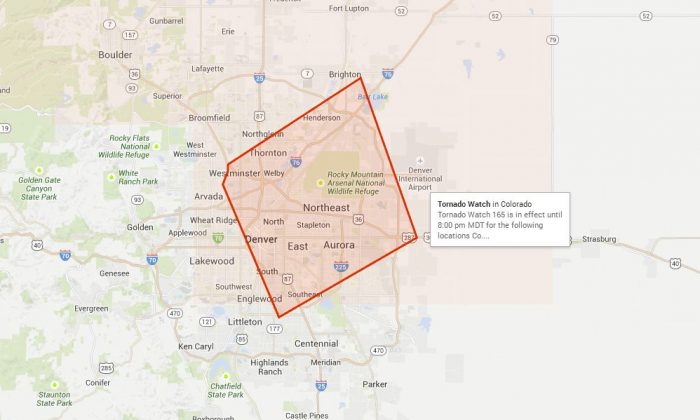 A tornado warning was issued for Denver, Colo., on Wednesday afternoon. (Google Maps)
US

The Denver International Airport (DEN) was under a tornado warning on Wednesday, according to preliminary reports.

Trains and flights were put on hold.

Reports on Twitter said that people were told to seek shelter.

A tornado warning was issued for the greater Denver area on Wednesday.

Weather Underground said a tornado has been reported on the ground at Tower Road and Smith Road in Denver at 2:21 p.m. local time.

“At 1:56 pm MDT, a severe thunderstorm capable of producing a tornado was located over Commerce City, or 6 miles northeast of Denver, moving northeast at 10 mph. This Tornado Warning replaces the Severe Thunderstorm Warning that was in effect. Hazard, tornado and half dollar size hail. Source, radar indicated rotation. Impact: flying debris will be dangerous to those caught without shelter. Mobile Homes will be damaged or destroyed. Damage to roofs, windows and vehicles will occur. Tree damage is likely,” the NWS warning also reads.

DENVER (AP)–Severe thunderstorms are raising the risk of tornadoes forming in northern Colorado as well as southeastern Wyoming.

A tornado watch is in effect until 8 p.m. Wednesday for Denver and 10 surrounding counties as well as Goshen, Laramie and Platte counties in Wyoming.

Some rotating clouds have been spotted outside of Denver but no tornadoes have been confirmed. Part of theDenver International Airport’s property is included in the tornado warning area so no planes are landing or taking off.

The storms have already dropped heavy rain and hail around the Denver area. Tornado sirens have gone off in Denver and surrounding communities.