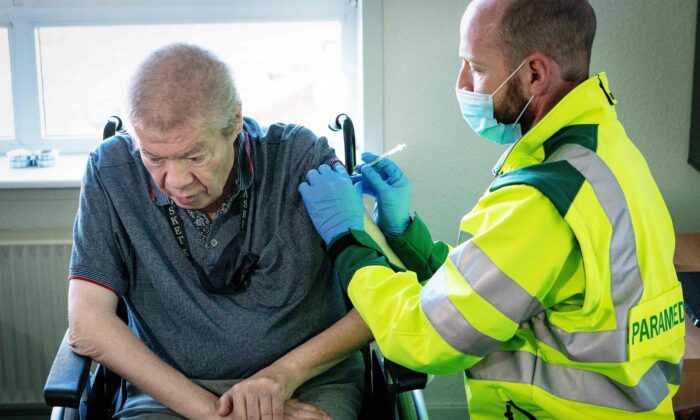 Denmark to Suspend Countrywide COVID-19 Vaccination Program in May

Denmark has become the first country to suspend its COVID-19 vaccination program, citing a drop in new infections and high immunity among the population.

The country—which in February lifted all pandemic-related restrictions—announced the decision on Tuesday, with officials stating that it was in a “good position” to scrap the program.

The Danish Health Authority pointed to high vaccination rates across the nation, noting that over 4.8 million Danes have been vaccinated since December 2020, as well as a drop in new infections, high immunity among the population, and stabilized hospitalization rates as reasons for the decision.

Beginning May 15, the government will no longer issue vaccination invitations or reminders, officials said.

However, health officials continue to recommend those who are at an increased risk of severe COVID-19, such as individuals with underlying health conditions, to get vaccinated. They also recommend that Danes complete their vaccination course if they have started one.

While the program will be suspended as of mid-May, officials expect to resume it again after the summer.

“Vaccines against COVID-19 will likely be needed again this fall,” they added. “This is because coronavirus is an unstable virus that can continue to mutate, and we expect to see an increase in infections again as we go from fall to winter.”

Bolette Søborg, director of the authority’s department of infectious diseases, said health officials will assess who needs to be vaccinated and when, as well as with which vaccines before next autumn, according to Danish news outlet, The Local.

Denmark became the first country in the EU to scrap pandemic-related restrictions in February, stating that the virus was no longer considered “a socially critical disease” and was not burdening the health system.

However, when the highly transmissable wave of Omicron hit Denmark in November last year, the country stepped up its immunization campaign, which included booster shots and a fourth dose of the vaccine in mid January for vulnerable individuals.

The decision to drop the vaccination program in Denmark comes a month after White House COVID-19 adviser Dr. Anthony Fauci warned of the potential for pandemic restrictions to be reinstated in the United States if there is an upstick in virus cases.

Fauci told the BBC that Americans “need to be prepared for the possibility” for an increase in cases but noted: “I don’t want to use the word ‘lockdowns.’ That has a charged element to it. But I believe that we must keep our eye on the pattern of what we’re seeing with infections.”

The BA.2 Omicron subvariant makes up around 68.1 percent of cases, according to data from the Centers for Disease Control and Prevention.