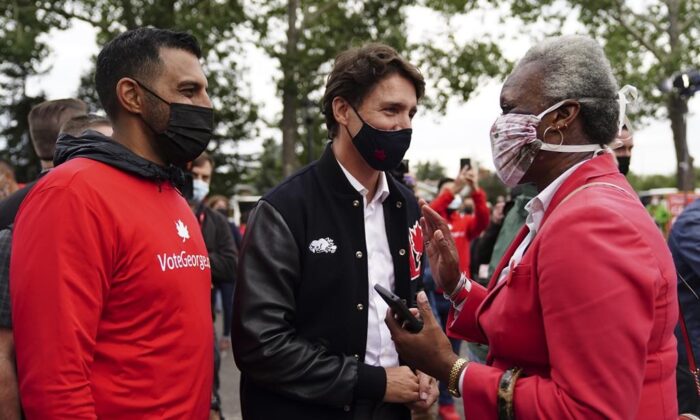 The Conservative incumbent who was defeated in Calgary Skyview in last week’s federal election is planning to ask a court to quash the result, given allegations of dirty tricks by the Liberal victor.

Liberal George Chahal was captured on a doorbell camera on the eve of the election removing a campaign pamphlet left by his Conservative opponent, Jag Sahota, and replacing it with one of his own.

He ultimately edged out Sahota by a margin of almost 3,000 votes.

A lawyer for Sahota said Tuesday he is now preparing an application to the Court of Queen’s Bench to have the results in the riding quashed.

Kyle Shewchuk said he hopes to file the application within the next week.

The Calgary Police Service last week started an investigation, but Shewchuk said the matter has since been transferred to the commissioner of elections, who enforces the Canada Elections Act.

Chahal, a former Calgary city councillor, could not immediately be reached for comment.

But his campaign manager, Randall Zalazar, has said Chahal removed Sahota’s brochure because it contained inaccurate information about where to vote.

Sahota’s campaign disputes that and maintains that it was actually Chahal’s flyers that directed voters to the wrong polling station.

In the videotaped case of the brochure Chahal left on the doorstep after removing Sahota’s flyer, Shewchuk’s law office said in a written statement later Tuesday that the polling station address was “literally 18 kilometres away.”

“Voters in Calgary-Skyview need to have answers as to whether this activity was widespread throughout the campaign,” the statement said.

“Calgary-Skyview had a close result and this could have had an impact on the final outcome.”

It is an offence under the Canada Elections Act to knowingly try to prevent anyone from voting.

Following the 2011 federal election, the RCMP and the elections commissioner investigated widespread complaints of robocalls that misdirected voters to the wrong or non-existent polling locations.

A junior Conservative campaign staffer in Guelph, Ont., Michael Sona, was eventually found guilty of orchestrating that effort. He was sentenced to nine months in jail and a year of probation, although the judge doubted that Sona had acted alone.

The office of elections commissioner Yves Cote won’t confirm whether it has received a complaint or started an investigation into Chahal, due to confidentiality requirements.

But the office has pointed out that the Canada Elections Act contains a prohibition on “impairing or preventing the transmission of election advertising—which would include, but is not limited to, defacing or removing election signs or other election advertising material.”

Incidents involving the defacing or removal of campaign material have historically constituted one of the most common complaints the elections commissioner receives during a campaign, his office has said.

As the lone Liberal elected in Calgary and one of just two elected in all of Alberta, Chahal was widely expected to be a shoo-in for a cabinet post in Prime Minister Justin Trudeau’s new government.

But the video of him removing Sahota’s pamphlet and the ensuing controversy could kill his cabinet hopes, at least for now.