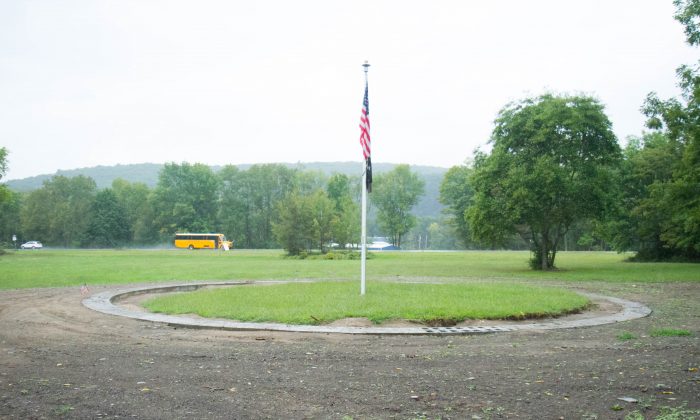 The foundation of the Deerpark veterans memorial behind the Sparrowbush firehouse on Sept. 10, 2015. (Holly Kellum/Epoch Times).
New York

SPARROWBUSH—Driving down Route 97 in Sparrowbush, bypassers may have noticed a new flagpole rising up from the grounds behind the Sparrowbush firehouse.

The flagpole and the concrete ring around it were erected this summer by the Deerpark Veterans Committee, the beginning of what is soon-to-be an all-veterans’ memorial, the first veterans’ memorial in Deerpark.

“My name is on a memorial over in Middletown—there’s a Vietnam vets memorial over there,” said Floyd Babcock the progenitor of the project and a member of the Deerpark Veterans Committee. “So I got to thinking, ‘Why do I have to travel past two cities to have a memorial?'”

Why do I have to travel past two cities to have a memorial?
— Floyd Babcock

He broached the idea to the Deerpark Veterans Committee back in 2011 and they took the idea and ran with it. They hope to have it completed by the Spring of 2016.

The memorial will have a circle of engraved bricks in a 25-foot radius around the flag pole and a four-foot wall outside the bricks with the insignia of six branches of the military set in it: The Army, the Navy, the Marines, the Air Force, the Coast Guard, and the Merchant Marines.

The wall will have benches built into it for people to sit on and there will be an opening in the wall where a path coming from the direction of the Sparrowbush firehouse will end.

The land was donated by the Sparrowbush Engine Company, where Babcock was once a fire fighter, fire chief, and fire commissioner before he retired.

The concrete blocks were donated by Dick’s Concrete Co. and the sand by Frank Somarelli. The labor for the foundation was also free—a combination of volunteers from the Deerpark Veterans Committees, masons’ union Local #5, and a boy scout.

Wilbur Wesselius, the designer of the monument, estimates it will cost around $50,000-$60,000 when all is said and done.

Still, Wilbur Wesselius, another member of the Deerpark Veterans Committee and the designer of the monument, estimates it will cost around $50,000-$60,000 when all is said and done.

They have already raised several thousand through fundraisers, Babcock estimates, and unbeknownst to the group, $10,000 was put into the Deerpark preliminary budget for the memorial.

Both Babcock and Wesselius were drafted to fight in Vietnam in the 60’s and both spent two years in the army.

To this day, the war plays a big part in their lives. Along with the Deerpark Veterans Committee, they are both members of the VFW #161 in Port Jervis and the Vietnam Veterans of America chapter of Orange County.

The war stays with them in unpleasant ways as well. Babcock said his hearing was has been affected by the fighting in Vietnam, and he still has nightmares. For Wesellius, it is the friends he made in the army who never came home.

“You try not to dwell on it or you’ll go bananas,” he said.

Respect for the veterans’ sacrifice has gradually improved since they first came back from the war, Wesselius said.

“If I go somewhere and I have my [Vietnam veterans] hat on, total strangers will come up to me and say ‘Thank you for your service,'” he said. “And that’s something that never used to happen.”

Just recently, Babcock went to pay for his meal at Muller’s Diner in Port Jervis only to find that a woman had already paid for it. Wesellius recounted a similar story.

“When that happens, it just kind of humbles you,” Babcock said.