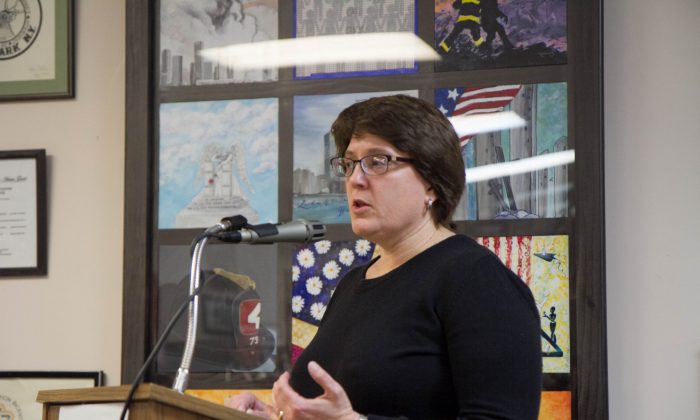 Patricia Irwin, a Deerpark resident, speaks about a proposed mine on Big Pond Road in Huguenot at a Town Board Meeting on March 7, 2016. (Holly Kellum/Epoch Times)
New York

Deerpark Residents Speak Out Against Proposed Mine

HUGUENOT—Town of Deerpark residents spoke out against a proposed mining operation during a Town Board meeting March 7. Board members had asked for feedback on the project, which was first brought to the town planning board in 2012.

The project would put a sandstone and shale mine on 39 acres of a 43.3 acre parcel of land located on Big Pond Road in Huguenot in an area that is currently zoned hamlet mixed use. The company, Huguenot Associates LLC, is applying for a special use permit.

According to the Department of Environmental Conservation’s (DEC) scoping document, the mine would remove roughly 300,000 tons of material per year, requiring blasting and drilling of bedrock, and crushing and screening of the material through an aggregate portable processing plant.

To haul that material could create between 150 and 350 truck trips to the site per day, and could potentially be harmful to the timber rattlesnake, which is listed as threatened in the state of New York.

Addressing the former issue, Lynn Marshall, a retired school bus driver for the Port Jervis City School District, told the Town Board she worried about so many trucks on the narrow, winding roads surrounding the property.

“There’s no room for cars often. Somebody has to backup or pull off just for the bus to get through,” she said. “I can’t imagine dump trucks going up and down there.”

Paul Kuhn, the third generation to live in his house on Big Pond Road, said he worried about the effect so many dump trucks would have on his house’s structural integrity.

Maureen Decker, who lives on Peenpack Trail, expressed concern about the disturbance the blasting would have on the ground water, saying it could cause a leakage of benzene found in the area.

The chemical is believed to have leaked from an underground wastewater pipeline of Wickhen Products sometime in the 1970s, and the pipeline was capped at both ends in 1977.

Summit Labs, which took over the site in 1992, ordered a study of the ground water and found concentrations of benzene decreased by 80 to 97 percent between 2000 and 2009.

Benzene could leak again if the capped pipeline were disturbed

Still, Decker said, based on information she got from Dow Chemical, which also owned the plant for six years, the benzene could leak again if the capped pipeline were disturbed.

The executive director of the Huguenot YMCA camp, Thad Gifford-Smith, said he was concerned it would affect the camp, which is across the road from the proposed mining site,  if the aforementioned problems to the water and dust from the site were to affect their property.

“We view the mine as an existential threat to our operation here,” he said. “We operate close to the margin, which means that those families that do pay full freight, keep us in business. And those families in particular are going to be resistant to sending their kids to a camp immediately adjacent to a mine.”

The property owner has fallen out of favor with neighbors for other reasons besides the proposed mine. Several years ago he introduced pigs onto the property, which many suspect were to get rid of the rattlesnakes.

Patricia Irwin, a neighbor to the property, said the pigs used to wander unchecked into her yard, prompting “numerous” calls to the police. Even worse though, she said, the owner was not feeding the pigs regularly.

“I have pictures of the dead pigs,” she said.

The other complaint both residents and the town engineer shared is the clear-cutting the property owner did of the trees without permission and without a mitigation plan, which resulted in erosion.

“People’s homes have already been damaged,” said Nancy Gibson, who lives and has an animal sanctuary adjacent to the proposed mine site. “The Big Pond mine must be stopped, either by changing the zoning or by the people of the Town of Deerpark.”

Huguenot Associates LLC was incorporated in 2011 by a man named David Gilbert whose website says he is a real estate lawyer in Middletown. When approached about the story, he declined to comment.

The address for Gilbert’s office doubles as an office for Qualikraft, Inc., a business listed on several websites as a “home builder” under the Standard Industrial Classification (SIC) code.

Huguenot Associates LLC submitted an Environmental Assessment Form (EAF) in 2012 to the DEC, which found the proposal would cause a “significant adverse impact on the environment” and requested a Draft Environmental Impact Statement (DEIS) from the company in June of 2014.

Deerpark Town Attorney, Glen Plotsky, said he believed that the DEIS would be submitted sometime in the next 30 to 60 days.

All levels of government have expressed concern about it.

The DEC, which is the lead agency on the environmental review, will put the statement online, said a spokesperson for the agency, and the public will have a chance to comment on it. A hard copy will also be available at the New Paltz DEC office and Deerepark Town Hall.

If the proposal passes the DEC it will then have to pass the Deerpark Planning Board, which will be responsible for ensuring it meets any zoning restrictions.

While the DEC and the Town Planning Board are the only agencies with the power to reject the plan, all levels of government have expressed concern about it.

The Town Board wrote a letter to the DEC, as did state Assemblyman Karl Brabenec, expressing their concerns. House Rep. Sean Patrick Maloney’s office said they are monitoring the situation. State Senator John Bonacic requested the Draft Environmental Impact Statement and said the DEC must do their due diligence to ensure that “any potential environmental concerns by the Town’s residents are addressed.”