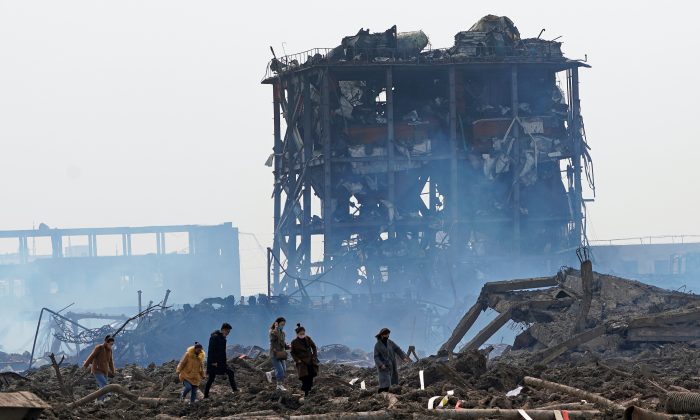 Relatives look for a missing worker at the pesticide plant owned by Tianjiayi Chemical following an explosion, in Xiangshui County, Yancheng, Jiangsu Province, China on March 23, 2019. (Aly Song/Reuters)
By Reuters

BEIJING—The death toll from a massive explosion last week at a pesticide plant in eastern China rose to 78 on March 25, with 13 people listed as being critically injured.

Public anger over safety standards has grown in China over industrial accidents, ranging from mining disasters to factory fires, that have marred three decades of swift economic growth.

“Authorities at all levels should inspect enterprises that are involved in nitration manufacturing and storage to make sure they comply with regulations on dangerous chemicals,” Xinhua said, citing a statement from the Ministry of Emergency Management.

According to a report by The Epoch Times, the Chinese regime is preventing non-state media from covering the story as it seeks to control the messaging surrounding the incident.

Locals, who did not wish to be named, told the Chinese-language Epoch Times that they were skeptical of the official figures, in particular, the number of missing persons. They said the hospitals were flooded with people searching for missing loved ones, such that they outnumbered hospital staff many times.

The blast also damaged 16 neighboring factories and shattered windows on buildings located within 3 miles of the epicenter. The China Earthquake Administration recorded a magnitude 3.0 earthquake caused by the explosion.

The Chinese regime has pledged to improve safety in factories, though explosions and other incidents are still commonplace.

In August, five people were killed in an explosion at an aluminum plant in the eastern city of Jiangsu.

In July, 19 people died in a blast at a chemical plant in the southwestern province of Sichuan.

In 2015, 165 people were killed in explosions at a chemical warehouse in the northern city of Tianjin, one of the world’s busiest ports, which is not far from the capital, Beijing.