Communism: The Leading Ideological Cause of Death in the 20th Century
0
Share Now
TelegramFacebookTweetEmailTellMeWeReddit
Copy Link 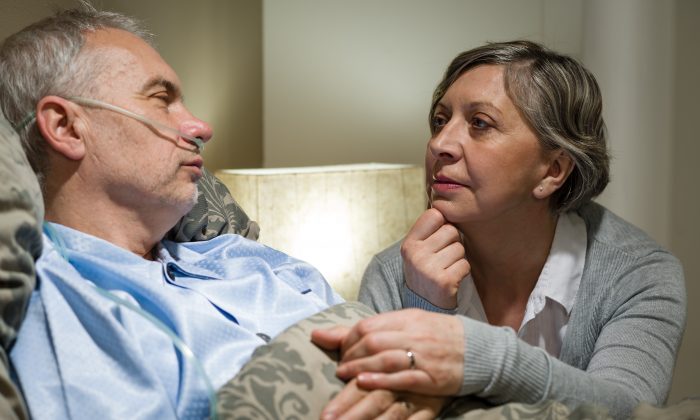 Few things alleviate the fear of death more effectively than the affection and attention of our loved ones. (CandyBox Images/Shutterstock)
Lifestyle

Death Doesn’t Have to Be So Scary

Since he watched his mother collapse and die, Richard Bridgman’s fear of death has left him emotionally paralyzed.

It was right around Thanksgiving—nearly 45 years ago—and Bridgman was sleeping overnight on his mom’s living room couch.

“In the middle of the night, she walked into the room and said, ‘Richard, I’m dying,’” recalls Bridgman, who tried to reassure his mom that she’d be OK. But his mother, who had a heart condition, was suffering a massive heart attack. “She looked at me and fell over on her head. I didn’t know what to do. She was dead.”

Death haunted much of Bridgman’s early years. His stepfather died when Bridgman was 15. His father, an alcoholic, died when Bridgman was 17. And Bridgman was 26 when his mom died before his eyes. Now, 72, and long retired from the bill collection business he once owned in the Springfield, Illinois, area, he has spent most of his adult years trying to cope with—if not overcome—his immense fear of death.

“Death became an obsession,” he said. “No matter where I went or what I did, death was always in the back of my mind.”

Most people prefer not to think about death, much less plan for it. In a tech-crazed world, where communication is broken into 140 characters and six-second sound bites, our connection with each other is dissected into so many bite-sized morsels that discussion of death would seem an unwieldy topic of conversation.

But wait. What if death isn’t actually unhappy? What if it simply—is? For Bridgman, whose fear of death was overwhelming, that simple question was a critical step in learning to deal with death. That question was posed to him by Chin, whom he discovered via a Google search. Several supportive phone consultations with Chin—combined with a simple meditation process that Chin teaches—have helped to keep Bridgman’s fears under control.

“I spent so much money on psychiatrists and psychotherapists—none of them did any good,” says Bridgman. But Chin steered Bridgman toward meditation. “Meditation is better than medicine,” Bridgman said.

Everyone must figure out their own way to handle the fear of death. One expert, who overcame her own fear through years of attending to the dying, says death is rarely the terrible thing that most folks fret about.

“Death is usually a peaceful process,” explains Donna Authers, a professional caregiver, motivational speaker, and author of the book “A Sacred Walk: Dispelling the Fear of Death and Caring for the Dying.”

But it took Authers years to learn the lesson that death need not be frightening. As a child, death haunted her. When she was 2 years old, her father was killed in World War II. Her mother, who had remarried, died on Authers’ fifth birthday. “Instead of a birthday party, I woke up to the worst day of my life,” she said. Her grandfather committed suicide when Authers was 15.

It was Authers’s grandmother—while dying from cancer—who taught her the most critical lesson in accepting death’s inevitability. Authers brought her grandmother home to tend to her during her final days, but her grandmother could sense her granddaughter’s terrible fear.

That’s when her grandmother took her by the hand and, unafraid, reminded Authers, “Death is part of life. You, too, will be where I am someday, and you can’t face death with fear,” she said. That changed everything. Seeing her grandmother bravely face death caused her own fears to dissolve.

“I was no longer afraid of death and dying,” Authers recalls.

Authers ultimately left her job as an IBM marketing executive to become a caregiver. Through the years, she has found that faith is the most important quality among those who face death without fear. “People who have faith in something don’t grieve like those who have no hope,” said Authers.

Increasingly, however, Chin has found that millennials—more than any other demographic—fear death the most.

“It’s the downside of social media,” said Chin. “The bombardment and speed of communication lead to an overload that can trigger a fear of death.”

Perhaps even the world of politics can play a role, suggests Sheldon Solomon, professor of psychology at Skidmore College and author of “The Worm at the Core: On the Role of Death in Life.”

In times of political upheaval—particularly when people are reminded of their mortality—the fear of death increases, even as they tend to be attracted to political figures who promise them more security, said Solomon, who has conducted numerous experiments on this issue.

“When people are reminded of their own mortality, in an effort to bolster faith in their own view of reality, they become more hostile to anyone who is different.”

Even then, says Solomon, perhaps nothing alleviates a dying person’s fear of death more than love.

A terminally ill grandmother he knew was distraught at the prospect of death. No doctor and no medicine could help her. Then, she received a short phone call from her granddaughter, begging her for her cupcake recipe. “No one can make them like you,” her granddaughter said.

“That call did more in five minutes than anything else could have,’” says Solomon. “It reminded the grandmother that she will live on in the memories of the people she loves. That was all she needed to know.”

Bruce Horovitz is a freelance journalist and regularly writes for Kaiser Health News, which first published this article. KHN’s coverage of end-of-life and serious illness issues is supported by The Gordon and Betty Moore Foundation.