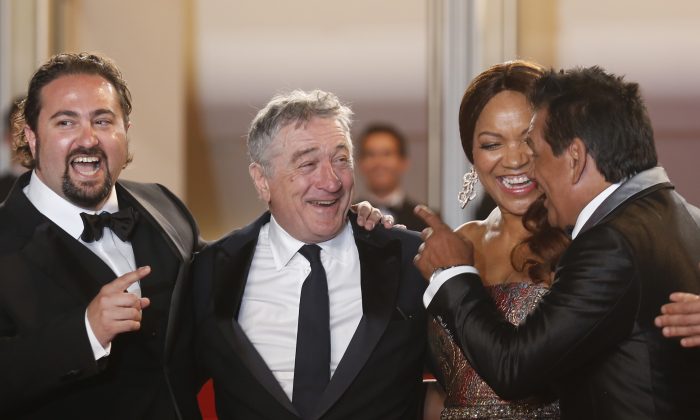 De Niro Is Back in the Boxing Ring, but the Gloves Are Off

The great heavyweight of the boxing film has at last moved to the trainer’s corner, that sweat-drenched home of grizzled veteran actors and manly pep talks. In “Hands of Stone,” Jonathan Jakubowicz’s biopic of the lightweight champion Roberto Duran, De Niro plays the famed trainer Ray Arcel. Edgar Ramirez, the “Carlos” and “Point Break” star, plays the Panamanian fighter in the film.

Sitting on a rooftop in Cannes shortly after “Hands of Stone” debuted at the French Riviera film festival, De Niro said he was happy to leave the rigors of playing a boxer to the 39-year-old Ramirez.

“I saw him working so hard and so disciplined. I was glad it wasn’t me,” said De Niro, letting out a belly laugh and patting Ramirez on the back. “Great job!”

Ramirez, who trained extensively for the part, shook his head. “He was hitting the best restaurants in Panama whenever we had a day off. I just stayed in my apartment.”

“Hands of Stone,” which the Weinstein Co. plans to release later this year, arrives more than 35 years after De Niro famously played boxer Jake LaMotta in “Raging Bull,” a movie that De Niro pushed for a then-struggling Martin Scorsese to direct. The film remains the belt-holder of boxing films, revered for its monochromic cinematography and dark, disturbed mystery.

“I got a sense that he had a real elegance and an aura about him that’s not typical of trainers I’ve met,” said De Niro.

“Hands of Stone,” a rags-to-riches tale with the rivalry between Duran and Sugar Ray Leonard (a fleet-of-foot Usher) thrown in, is a more meat-and-potatoes boxing drama, with the benefit of local Panama atmosphere (it was partly shot there.) Variety said it “punches ahead in a conventional, aggressive, no-frills way.”

“I didn’t have to do it, I just wanted to do it,” said De Niro. “I wanted to make sure that they went in the right direction.”

De Niro, 72, might have been expected to leave the boxing ring long ago, but he returned to it in the 2013 comedy “Grudge Match.” He and Sylvester Stallone played aged rivals coaxed back into a fight.

Few actors, though, are more appropriate for the role of sage mentor. De Niro isn’t one to lecture on acting, but he does preach minimalism in performance.

“Actors sometimes tend to think ‘I’m not doing enough.’ The fact is you don’t have to do anything in some cases. Doing nothing is all that you need to do,” says De Niro. “That’s a hard thing to do: not doing anything.”

At the premiere of “Hands of Stone,” the festival hosted a quick tribute to De Niro, which left him teary-eyed. The festival has long welcomed the actor, who in 2011 was president of the jury. Forty years ago, “Taxi Driver” won the Palme d’Or. And before that, “Mean Streets” played in the Directors’ Fortnight section. But De Niro’s memory is foggy.