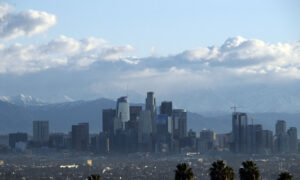 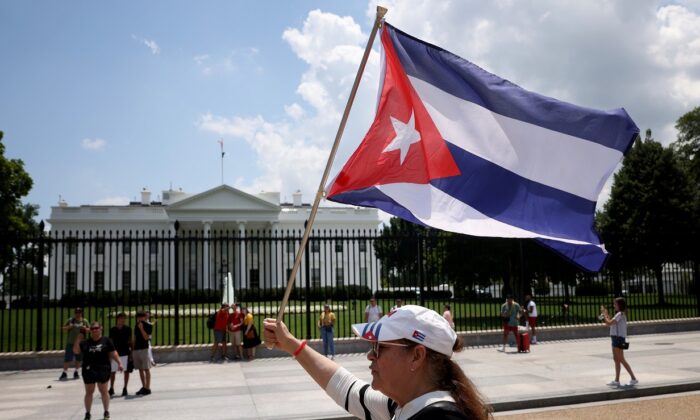 Cuban-Americans demonstrate in support of demonstrations taking place in Cuba, outside the White House on July 12, 2021. (Win McNamee/Getty Images)
Viewpoints

Cuba, Iran, and the Shame of the United States

If I hadn’t left the Democratic Party years ago, I would leave it now.

Their namby-pamby, lip-service reaction to the uprising of the Cuban people against 62 years of brutal communist oppression is shameful beyond words.

Apparently, the protests are a bit inconvenient for them. Rep. Alexandria Ocasio-Cortez might be embarrassed if they said or did anything, not to mention Sen. Bernie Sanders.

Homeland Security Secretary Alejandro Mayorkas warning Cuban refugees not to come (while the border is open to practically everybody else, from Houthis to extra-terrestrials) put the capper on it.

The Coast Guard has evidently already been alerted not to allow this freedom-loving riff-riff on our shores. After all, some of them might vote Republican.

Cuban-born himself, Mayorkas’s behavior is not that far from the Jewish kapos who kept order for the Nazis inside the concentration camps. What he’s done—no doubt on orders from above—is equally repellent.

But the Democrats clearly had and have more important fish to fry, such as prolonging the fiction that another freedom-oriented demonstration (Jan. 6), clumsy as it might have been, was a veritable “insurrection.” (The poor folks just somehow forgot to bring guns.)

Furthermore, Russia, China, and Iran have warned America not to meddle in Cuba or else.

Not to worry, Axis of Evil. Whatever rhetoric they may spout, our government isn’t really against you.

In the midst of the Cuban demonstrations and on the very day that Mayorkas was giving his Comrade Gromyko-like “nyet” to refugees from communism, many of whom were being beaten in the streets or worse, our State Department was busy assuaging the mullahs.

From the Washington Free Beacon:

“The State Department informed Congress late Tuesday that it would waive sanctions on Iran’s illicit oil trade so that the country can access frozen funds from South Korea and Japan, the same day the Department of Justice announced charges on an Iranian spy network that sought to kidnap an American.

“The waiver, signed by Secretary of State Antony Blinken, allows the ‘transfer of Iranian funds in restricted accounts to exporters in Japan and the Republic of Korea,’ according to a notification sent to Congress by the State Department. The waiver allows Iranian money that had been frozen as a result of American sanctions to be freed up without violating the law.”

Now don’t get too upset. The State Department didn’t lift all the sanctions. … Yet. That would be bad news for American energy independence, what’s left of it.

Of course, that could change as soon as the comandantes calm things down sufficiently in Havana in their time-tested manner. A turn to Iran is already in the offing anyway.

As Axios reported on July 14, “Outgoing Iranian Foreign Minister Mohammad Javad Zarif wrote in a report to parliament that the Biden administration has agreed to lift almost all U.S. sanctions on Iran to secure a mutual return to the 2015 nuclear deal.”

Beyond the sanctions, also to be lifted are the terror designation against the Revolutionary Guard Corps and personal sanctions on Supreme Leader Khamenei as well as “more than 1,000 Iranian individuals.”

More details are in the Axios story, including what the Iranians are supposed to give up for all this largesse, but one wonders if the new Iranian hardline regime under Ebrahim Raisi has any real interest in a deal in the first place.

And if they do sign a deal, do they intend to abide by it? They didn’t before. Why should we expect them to now?

More importantly, why does Biden want this deal at all? The whole thing seems like some kind of charade, marking time for the globalist expansion.

In the end, the Iran deal seems all about the money. It certainly is for the Europeans. There’s no reason it shouldn’t be so for the Democrats, essentially now a globalist party.

Poor little Cuba, and most specifically, the benighted Cuban people, are just a sidebar in this great game—an inconvenience, as I noted above.

I was listening today to Clay Travis and Buck Sexton’s compelling new radio show (replacing Rush Limbaugh) and the two men were speculating on what could be done to free Cuba if we had a decent, moral government that had the will. It wasn’t easy, they pointed out, considering the recent failures of American adventures in Iraq and Afghanistan, the natural disinclination to use our military when our own country isn’t being threatened directly.

But Iraq and Afghanistan are tribal cultures thousands of miles away. Cuba is 90 miles away, according to a famous sign in Key West, and is a Catholic country, whose people haven’t bought the full communist atheism anyway, in other words, a Judeo–Christian culture like the United States.

In 1962, during the Cuban Missile Crisis, those 90 miles seemed painfully close. They could again. It’s more or less like Taiwan and China. Do you think Xi Jinping is looking at how we’re behaving on this one? He’s already gobbled up Hong Kong. Sometimes you have to draw the line.

Regarding Cuba, we have this update from Summit News:

“The Black Lives Matter organisation has issued a statement clearly aligning itself with the Marxist government’s brutal oppression of the Cuban people throughout the country, prompting widespread backlash but little surprise given that BLM itself was founded by avid Marxists.

“Rather than condemning the Cuban regime, the BLM statement blames the U.S. government under President Trump for ‘inhumane treatment’ of the Cuban people.”