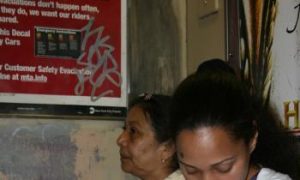 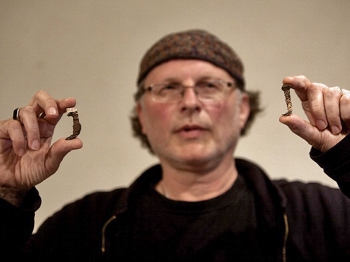 Simcha Jacobovici, the producer of Secrets Of Christianity series, shows the Roman nails which he believes may have been used in the crucifixion of Jesus, during a press conference in Jerusalem, on April 12,2011. (Menahem Kahana/AFP/Getty Images)
Middle East

Crucifixion nails found at a burial cave in Jerusalem could be connected to the crucifixion of Jesus 2,000 years ago, an Israeli-born Canadian documentary maker said on Wednesday, according to media reports.

The nails were shown to reporters this week at the premiere of a History Channel documentary series.

Simcha Jacobovici, the filmmaker making the claim, said the nails were found at the burial spot of the Jewish high priest Caiaphas, who turned Jesus over to the Romans, according to the New Testament.

“Two iron nails were found inside that tomb,” he said, according to AFP. “Somebody went to his grave with that nail among his bones and nobody reported it.”

His documentary, The Nails of the Cross, will examine the question of the nails’ origin and use. The nails were discovered in the burial site around 20 years ago but disappeared.

According to the London Telegraph, Jacobovici said he was able to track them down.

“If you look at the whole story, historical, textual, archaeological, they all seem to point at these two nails being involved in a crucifixion,” he said, according to the Telegraph. “And since Caiaphas is only associated with Jesus’s crucifixion, you put two and two together and they seem to imply that these are the nails.”

However, he admitted that he is not 100 percent sure if the nails were used for that purpose.

The Israel Antiquities Authority dismissed Jacobovici’s suggestion and said that there is no conclusive evidence that those were the nails used in the crucifixion, reported the newspaper.

“There is no proof that the nails are connected to any bones or any bone residue attached to the nails and no proof from textual data that Caiaphas had the nails for the crucifixion with him after the crucifixion took place and after Jesus was taken down from the cross,” Gaby Barkay, an archeologist at Bar Ilan University, told the Telegraph.