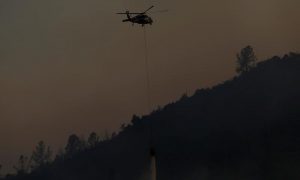 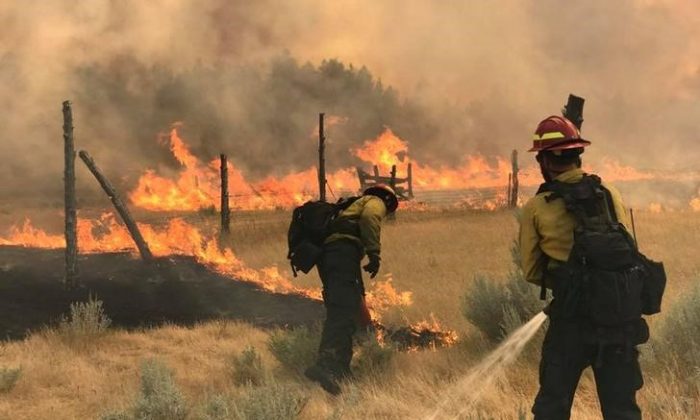 Crews Gain Ground Against Montana Wildfire, Largest in US

Fire crews gained ground on Tuesday against a nearly week-old wildfire that has torched more than two dozens buildings and charred hundreds of square miles of Montana prairie and is currently the biggest fire burning in the United States.

By Tuesday evening, a firefighting force consisting of 650 personnel had managed to carve buffer lines around 36 percent of the blaze’s perimeter, up from a containment level of 20 percent reported earlier in the day, fire officials said.

Enough progress was made that authorities on Tuesday lifted evacuation orders that had been in place for about 50 property owners since late last week, fire command spokesman Tim Engrav said.

“We’ve turned a corner,” he told Reuters, saying that hand crews and a small fleet of water-dropping helicopters had taken advantage of diminished winds, cooler temperatures and higher humidity levels during the past two days.

The aim was to consolidate gains before the weekend, when drier, gusty, hotter conditions were forecast to return, Engrav said.

The so-called Lodgepole Complex fire has so far laid waste to an estimated 270,000 acres (109,000 hectares) of sagebrush, grasslands and timber near the Missouri River in eastern Montana, Engrav said.

At least 16 homes and 10 other structures have been destroyed, but no serious injuries have been reported, fire officials said.

The Lodgepole ranked as the biggest of 45 large active fires burning across 10 Western states, according to the National Interagency Fire Center in Boise, Idaho. Montana accounts for 16 of those fires, more than any other state, the agency said.

Residents of Montana’s sparsely populated Garfield County, where the Lodgepole fire was burning, collected and transported relief supplies to people whose property has been damaged or destroyed.

Garfield County spokeswoman Anne Miller said in a telephone interview that donations of groceries, hay and money were pouring in to the tiny town of Jordan, Montana, about 220 miles northeast of Billings. Volunteers were mending fences, preparing food and gathering livestock.

“A house is considered a major loss, but the livelihood of most people here is the livestock, the pasture and grazing land,” Miller said. “The majority of these people would have rather lost their homes than their grassland.”

The Lodgepole Complex began last Wednesday as a cluster of four, smaller fires that erupted following a lightning storm and then converged two days later, though the official cause remains under investigation.