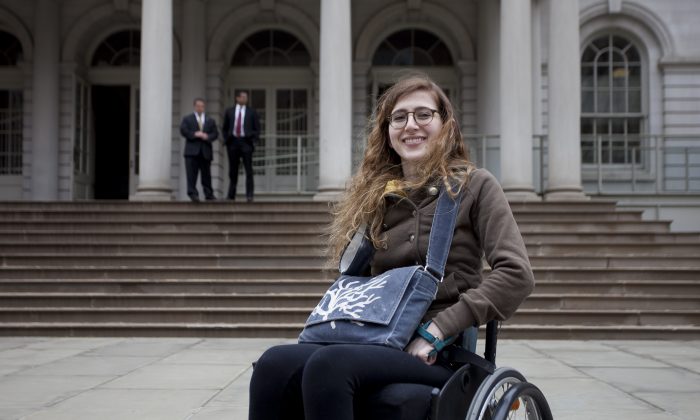 Manhattan resident GG deFiebre, 24, at City Hall on April 18, 2013, in New York City. DeFiebre supports a bill that would require all taxicabs in New York City to be wheelchair accessible. On June 6, a Court of Appeals ruled in favor of NYC, paving the way for 5,600 new wheelchair-accessible taxis in the five boroughs. Some advocates said the ruling is not perfect, but it is a start. (Samira Bouaou/The Epoch Times)
New York

Court Victory a Big Win for Wheelchair-Accessibility in NYC

5,600 wheelchair-accessible taxis to be added to city’s fleet
By Kristen Meriwether

NEW YORK—Hailing a wheelchair accessible taxi is like finding a needle in a haystack, but for New Yorkers whose only taxi option is using an accessible one, the search will soon be easier.

With a court victory on June 6, the city was given the green light to add 2,000 wheelchair-accessible yellow cabs, as well as 3,600 accessible green cabs in the newly created outer borough fleet.

“There are people with disabilities moving about the city every day,” said James Weisman, general counsel of United Spinal Association. “Right now their situation is abysmal.”

The new allotment of yellow taxi medallions will give a much needed boost to the Accessible Dispatch program, which can currently only call on 233 taxis to pick up passengers, as well as allow users new access to the outer boroughs, which has been without accessible taxis.

“This is a big change,” said Weisman, who is also a founding member of the Board of Directors of the American Association of People with Disabilities. “London has had every taxi accessible since 1989, but no city in the U.S. has done it. If everything falls into place as we plan, we will be way ahead of other cities.”

It will take three to five years before the accessible fleet reaches the newly allotted levels. In October, the city will hold its first auction of the new yellow cab medallions, although the Taxi and Limousine Commission (TLC) did not specify how many medallions would be available.

Bill Scalzi, President of Accessible Dispatch, the program the city uses to dispatch the accessible taxis to customers, characterized the move as a home run for everyone.

“We have been struggling because 233 taxi cabs is not nearly enough to provide the service we would like,” Scalzi said by phone June 6. He also said not all of the 233 taxis are out at one time. Of those on the road, Scalzi said they are not always available because they can pick up other passengers.

Currently, the average wait time for an accessible taxi using the Accessible Dispatch program is 11 minutes, and Scalzi believes the added taxis will drop that to five minutes.

“By having that many more vehicles available in the city, will make it a lot easier and service times will improve exponentially.”

Outer Boroughs
Accessible Dispatch is only available for the yellow cabs, which operate in Manhattan, below 96th Street. The rule will stay in place, since the 18,000 taxis which will make up the outer borough fleet will not be allowed to originate rides within that area. In the green fleet, 3,600 must be accessible.

New Yorkers requesting an accessible taxi in the outer boroughs could hail one, or call the car service the taxi belongs to, according to TLC spokesperson Allan Fromberg.

The city will only offer 6,000 Outer Borough licenses per year, of which 1,200 must be wheelchair accessible. Fromberg said the TLC would not equally divide up the licenses between boroughs, but would make sure areas in high demand would have greater access.

The TLC will only sell 4,800 non-accessible licenses, forcing the hand of some livery car owners to use an accessible taxi.

“In the extremely unlikely event that all 1,200 don’t sell, there will come a point when someone will want a street hail permit and the only ones left for that year will be the accessible ones,” Fromberg said. “The person will either take it or not take it.”

A $15,000 city subsidy will be offered to make up the cost of retrofitting a taxi to make it accessible. Fromberg believes this will make the wheelchair license very popular, as it only costs $1,500 for three years.

Not Perfect, but a Start
Wheelchair rights advocates have been pushing the city for years to make the taxi fleet more accessible to their needs, partly due to limited accessible subway stations.

A bill in the City Council requiring all taxis be accessible in three years fizzled last month, leaving little hope for improving mobility for wheelchair users in the city.

Thursday’s ruling changed that, and the city can begin to move in the direction of greater accessibility.

Weisman, who lobbied for the state law in Albany, said the TLC will be required to create a plan for improved mobility, which must be approved by the State Department of Transportation Commissioner, in order to continue to sell medallions after a year.

“Something is better than nothing,” said Jean Ryan, of Disabled In Action of Metropolitan New York. “We understand there are more non-disabled than disabled [people looking for cabs], and hopefully it will stay that way. But our numbers are greatly increasing.”

She did not think the outer borough plan would increase her odds of getting a taxi because she has to travel 10 blocks to find cabs in her neighborhood.

Edith Prentiss, Chairwoman for Taxis for All Campaign, also championed for the bill to require all taxis be wheelchair-accessible.

“The 2,000 accessible yellow cabs is pretty exciting, but it will probably be over five years,” said Prentiss. “I don’t have a lot of confidence they will meet the 20 percent requirement in the outer borough plan.”

Prentiss said she was excited to hear the medallion owners could choose from taxis other than the Nissan NV200, also known as the Taxi of Tomorrow, which the city has chosen as the model for all new yellow taxis.

Both Prentiss and Ryan have taken issue with the Taxi of Tomorrow, which is set to launch in October.