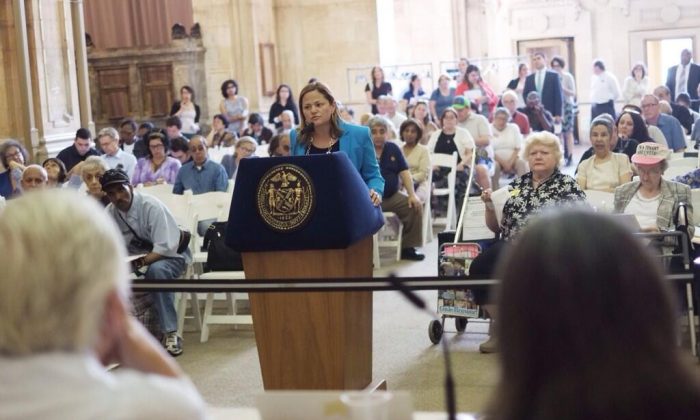 NEW YORK—New York City Council Speaker Melissa Mark-Viverito called for a freeze on rent increases in her testimony before the Rent Guidelines Board on Monday. Several other elected officials did the same.

The Rent Guidelines Board determines the maximum allowable rent increases for the city’s nearly 1 million rent-stabilized apartments. The board began to hear testimony from the public in Manhattan on Monday in advance of a final vote schedules for June 23.

The board will make history if it approves a zero percent increase on June 23. It has not approved a rent freeze in 30 years.

Mayor Bill de Blasio called for a rent freeze at the board’s hearing last year when he was the city’s public advocate. The board consists of nine mayoral appointees representing tenants, owners, and the public. De Blasio has already appointed five of the members, a voting majority.

Manhattan Borough President Gale Brewer will back a rent freeze as well, according to her prepared remarks. Her predecessor Scott Stringer, now the city comptroller, also delivered remarks calling for a rent freeze.

Nearly every speaker’s remarks were accompanied by cheers, applause, and outbursts of disagreement. A number of tenants in various types of housing said they were paying more than 30 percent of their income as rent. Some said they were cutting back on necessities like food or visits to the doctor and could not afford a rent increase.

Elected officials spoke in favor of a rent freeze, arguing higher rents would result in a loss of affordable units. Some landlords present questioned this logic.

There are several large management companies in the city, but a handful are owned by families with only one building.

“I am paying the tenants hundreds of dollars to take care of them,” said Lliam Greguez, who owns a brownstone with eight units on the Upper West Side. He considers his tenants his neighbors, but is also spending hundreds per unit in maintenance each year. A rent increase would show “this city is encouraging small businesses to fail,” he said.

Most small landlords say they are making a modest profit of a few thousand dollars a year.

Kallos, who testified in favor of a rent freeze, said he had already spoken to many landlords. “It means they have to be less greedy,” Kallos said. If small landlords are not willing to do so, there are plenty of non-profit housing organizations willing to step up and take over those buildings, Kallos said.

Board member Sara Williams Willard, a de Blasio appointee, said Kallos’ remarks were irresponsible and did not accurately represent the situation.

To a landlord only making $5,000 in profits off a building, a multi-million dollar offer to buy the building would be very attractive.

But the companies buying these buildings, many which have rent-regulated units, are hedging their bets on being able to buy or force out rent-regulated tenants and turn a hefty profit.

Joe Zitolo of management company Lemle & Wolff represents several owners with buildings across Northern Manhattan and the Bronx. Recently, Zitolo said, many of these family-owned buildings have been passed on to the next generation, and these new owners are not as attached to their buildings. In the face of seven-figure offers, he has already gotten a number of requests from the owners to sell their buildings. With offers this high, it is unlikely a modest rent increase could persuade landlords looking to sell to do otherwise.

Council member Mark Levine took a more tempered approach. “This is a balance,” Levine said. “You’ve got to balance the landlord’s situation with the tenants’.”

Levine said the balance showed that “tenants are suffering to a degree landlords are not.”

Landlord Greguez was not surprised. “It’s the votes,” he said. “There are so little of us [landlords] that they don’t care.”

The freeze would affect rent stabilized apartments, which make up more than 45 percent of all the rental units in New York City according to the 2011 Housing Vacancy Survey. An apartment is rent stabilized if it is in a building constructed before 1974, has six or more apartments, and rents for below $2,500.

Every year, some 100,000 of the rent-stabilized apartments become vacant. At that point, if the rent is higher than $2,500, the apartment becomes deregulated and the landlord can begin charging the market rate. If the rent is below $2,500, the unit remains rent stabilized.

In contrast to the rest of the United States, most New Yorkers do not own the places they live in. In 2011, rental units accounted for 68 percent of the city’s available housing stock, according to the triennial Housing Vacancy Study. New York is also unique amongst other cities, because the majority, 59 percent, of the rental housing stock is rent regulated.